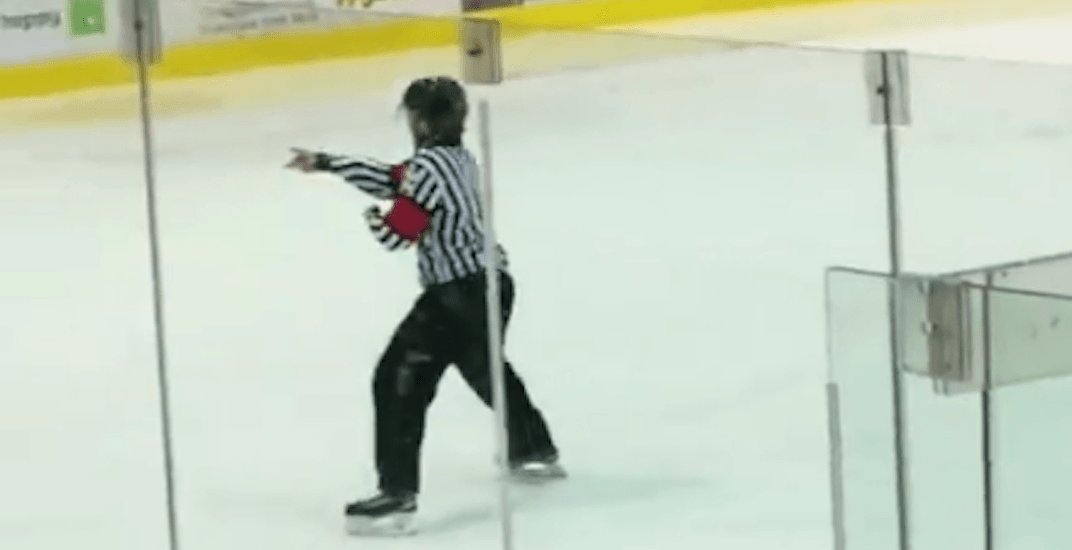 Talk about an overreaction.

A 17-year-old referee got in trouble recently for his actions during a minor hockey game. And it wasn’t the result of a blown call.

It was because of his dance moves.

Dylan Regnier was videotaped dancing during the intermission of a hockey game in Colwood, BC. The video went viral on Facebook, with more than 10,000 views by Thursday afternoon.

Regnier’s BC Hockey superior was reportedly not impressed, sending the teen a heavy-handed text message saying, among other things, he “couldn’t be more disappointed and angry,” adding that he fielded texts, emails, and phone calls asking why their association “chooses to make a joke of the game.”

Unfortunately, boring hockey culture dictates that people get angry for something harmless like this. It’s the same reason why Don Cherry and Brian Burke have criticized the Carolina Hurricanes’ outrageous post-game celebrations this season.

But the young referee wasn’t making a joke of the sport. He was having fun.

I mean, who among us hasn’t busted a move when Informer comes on? You expect this young man to stand still when he hears “a licky boom-boom down?”

“Sport is about fun, but there’s a time and a place for things too,” BC Amateur Hockey Association CEO Barry Petrachenko said in an interview with CFAX 1070 radio.

Petrachenko added that the text message sent to Regnier was sent by a volunteer, and wasn’t done out of malice.

“I understand why people would be upset about [the text message] and how the individual would react to that text message. We have to work on that messaging for sure.”

In recent years one NHL referee, Wes McCauley, has begun having fun and *gasp* showed some personality during games. His dramatic penalty calls and video review announcements have been greeted with delight from fans and players.

As one of just four referees tapped to call the Stanley Cup Final last year, he’s regarded as one of the best refs in the game.

Maybe Regnier shouldn’t dance when the Stanley Cup is on the line, but during an intermission in a mostly empty arena for a minor hockey game? When Informer comes on??

Give the people what they want.