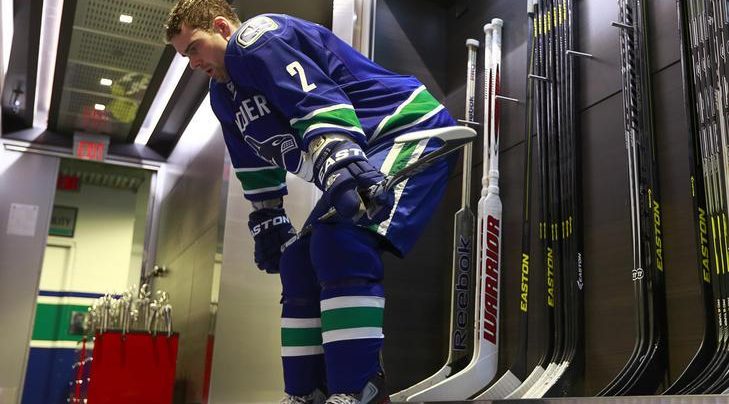 Dan Hamhuis has agreed to terms on a two-year deal worth $3.75 million per season with the Dallas Stars, which sadly puts an end to his time with the Vancouver Canucks. Signed as a free agent in the summer of 2010, Hamhuis was brought in to provide the Canucks with stable defensive play on the backend while still being able to contribute offensively.

The Smithers native provided that and so much more to the Canucks over his six-year contract. Let’s take a look back at his tenure in Vancouver.

Let’s get the sad one out of the way first.

Five years later, and watching that clip still brings pain to many Canucks fans’ hearts. With that being said, Hamhuis was a beast in the Canucks’ run to the Stanley Cup before ultimately being injured in the clip above. Although he only had 6 points in 19 playoff games that year, his defensive play allowed other defencemen like Christian Ehrhoff, Alex Edler, and Sami Salo to drive the play offensively.

Hamhuis, who was paired with Kevin Bieksa, would do the heavy lifting when it came to defensive assignments against Chicago, Nashville and San Jose and looked poised to shut down the Bruins in the finals. However, the infamous hip check on Bruins forward Milan Lucic resulted in Hamhuis suffering a sports hernia, as well as abdominal and groin injuries, which forced him to miss the remainder of the finals.

We will never know what may could’ve been if that hit never happened.

When it was originally bandied around that Hamhuis could be an option for Team Canada, there was some questioning in the hockey world about him having a spot on the star-studded roster. In hindsight, it seems like seriously misguided point of contention as the Vancouver Canuck defenceman thrived for Team Canada.

In a team full of stars, he provided something that the team lacked and did so very well. The 2014 Canadian Olympic Team will always be remembered for shutting teams down, and Hamhuis was a huge part of that.

Sometimes a player’s worth extends past what they bring to the ice, and Dan Hamhuis made a very large impact in BC off the ice. When looking into this part of his career, it is amazing how much he has done in his time with the Canucks. In 2012, Dan and his wife Sarah, donated $100,000 to the Ronald McDonald House here in Vancouver, which is something that is very close to their hearts:

“Growing up in northern communities in B.C., my wife and I have seen first-hand the help Ronald McDonald House BC has provided to friends of ours. We are excited to contribute to a new RMH that will serve many more families for years to come.”

In cooperation with the Canucks, he also launched the “Hammer’s Heroes” program, which provides tickets young local leaders making an impact in the community.

During the 2012 NHL lockout, Hamhuis, Bieksa, and many other Canucks would regularly drop in on minor hockey practices. Although it may seem small, the impact of these little visits leave lasting impressions on kids that can’t be replicated.

Hamhuis gave the Canucks everything they could have asked for when they signed him in the summer of 2010. In arguably the best unrestricted free agent deal the Canucks have ever signed, they were able to add a legitimate top pairing defenceman at a reasonable rate with.

Looking back at his time in Vancouver, it is amazing how consistent and reliable Hamhuis was.

He was one of most important players during the most successful period in franchise history.

With this move, Hamhuis will have a chance to get the Stanley Cup that eluded him five years ago. Hamhuis seems like such a nice human being and you can’t help but root for him.

All the best Hamhuis, you will be missed.