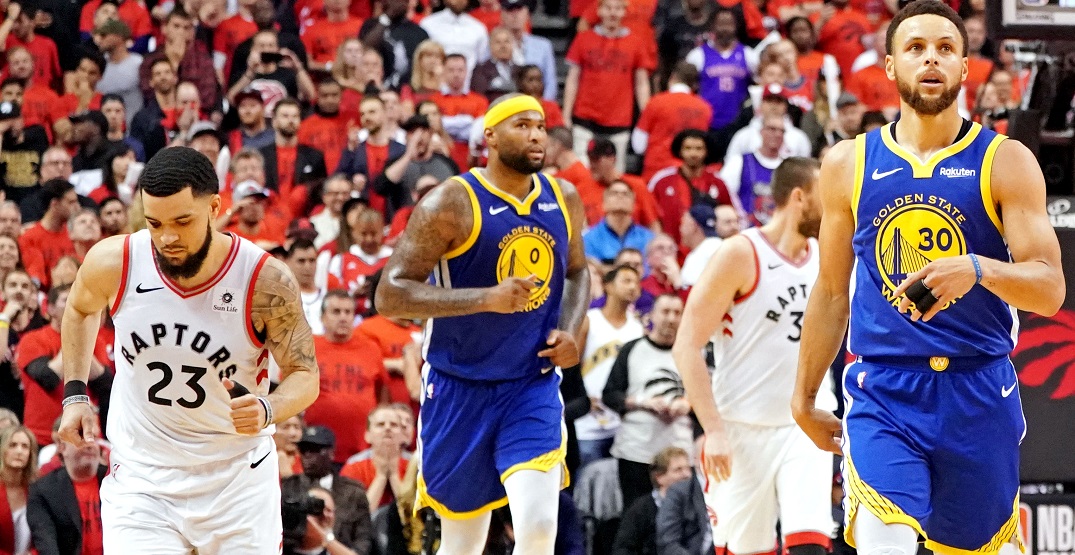 It was an iconic moment for Canada’s only NBA franchise and one that’s still talked about on a daily basis for Raptors fans.

But on the other side of the coin, it looked like one of the NBA’s great dynasties might come to an end.

During the series against the Raptors, the Warriors’ Klay Thompson (ACL) and Kevin Durant (Achilles) both suffered brutal injuries that forced them out of the playoffs.

Durant eventually left that summer to join the Brooklyn Nets and missed the whole next season, while Thompson suffered his own Achilles injury the following preseason and didn’t return to action until January 2022.

Three years later, the Warriors torched the Western Conference in their first playoff appearance since, and are tied 2-2 against the Boston Celtics in the NBA Finals.

“It was the end of an era at Oracle,” Curry reflected prior to tonight’s Game 5, referencing the team’s last game at their former arena before a move to the Chase Center the following fall. “So it was a lot going on already, it’s hard to pick out exactly what you’re feeling when it’s all kind of mixed together.”

Curry put up a monster stat line of 30.5 points, 6.0 assists and 5.2 rebounds averaged across the six games, but injuries coupled with a titanic Toronto roster proved too much to overcome.

Golden State had won both the 2017 and 2018 titles (as well as 2015) over Cleveland and was in its fifth straight Finals appearance, but fell short in its quest to win a fourth title in five seasons.

“Mixed emotions all around,” Curry added about the Game 6 loss. “I was trying to just find a way to stay alive.”

“I had been able to be consistently present in the lineup my whole career,” Thompson said. “So I had to kind of realign my whole train of thought with the months coming up…  Usually, after such a long season, you get a nice summer break, but I had to go straight into rehab and it was kind of like a long cycle after that for a couple of years.”

Curry said he has a “sense of gratitude” being back in the NBA Finals three years later.

“That chapter [against the Raptors] will always be part of our journey for sure… something that will be talked about for a very long time,” he said.

“I’m very grateful,” Thompson said. “Everything I did from that point led to this, so I would not change a thing.”

But having lost two finals before, the future Hall of Fame duo both know that the journey won’t mean nearly as much if they don’t cap it off with another championship ring.

“Hopefully we can get this job done,” Curry said. “And pay homage to that three-year journey actually leading to something truly special.”