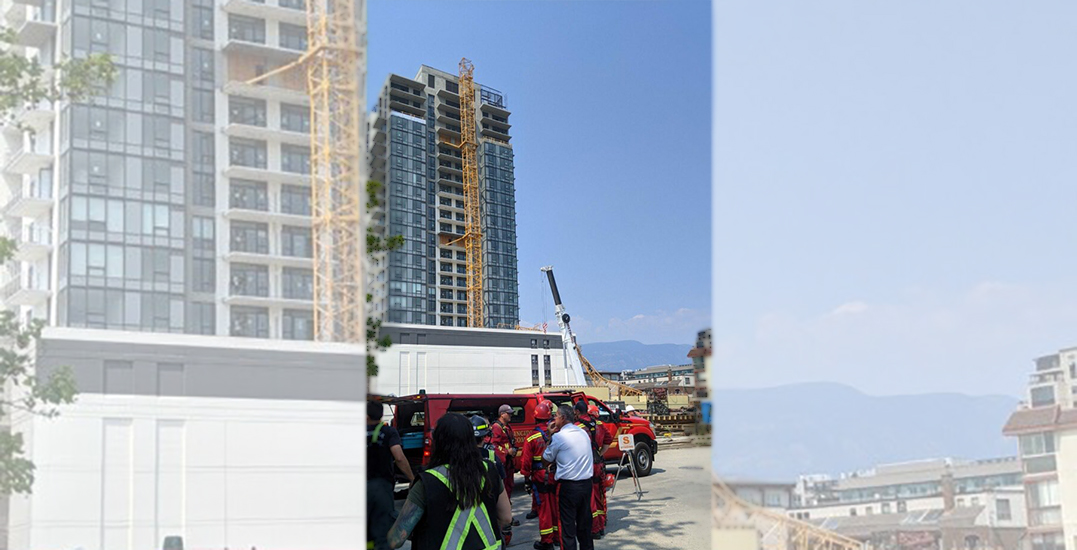 Emergency crews are responding after a crane collapsed onto an adjacent building in downtown Kelowna.

The deadly incident occurred on Monday morning just before 11 am. BC Emergency Health Services (BCEHS) tells Daily Hive Urbanized that the accident is located at the 700 block of Bernard Avenue near the intersection with St. Paul Street, where a residential tower is being built.

RCMP, first responders, West Kelowna Fire crews, and BC Coroners Service are all on the scene. WorkSafeBC’s prevention and investigation teams are also responding to the incident.

West Kelowna Firefighters are assisting @IAFF953 at the crane incident in Kelowna. Hoping for a safe operation and thinking of all of those affected by this unfortunate incident. @bcpffa @IAFFNewsDesk @CastanetNews pic.twitter.com/ffkOEhx3ao

BCEHS says that they have 12 ground ambulances at the scene, including two critical care teams.

Two patients have been transported to hospital, one of whom is in critical condition. Officials have yet to confirm the exact number of fatalities.

RCMP adds that as a result of the incident, power is disrupted across much of the downtown Kelowna core.

“I am deeply saddened to hear about the terrible incident involving a construction crane in Kelowna today. My thoughts are with the workers affected, and I send my sincere condolences to the families, friends and co-workers of the victims,” said Harry Bains, BC Minister of Labour, in a statement:

“All workers have the right to a safe and healthy workplace — even one injury or death is too many. This is a heartbreaking reminder that we must strive to ensure the safety of all workers to prevent incidents like this from happening.