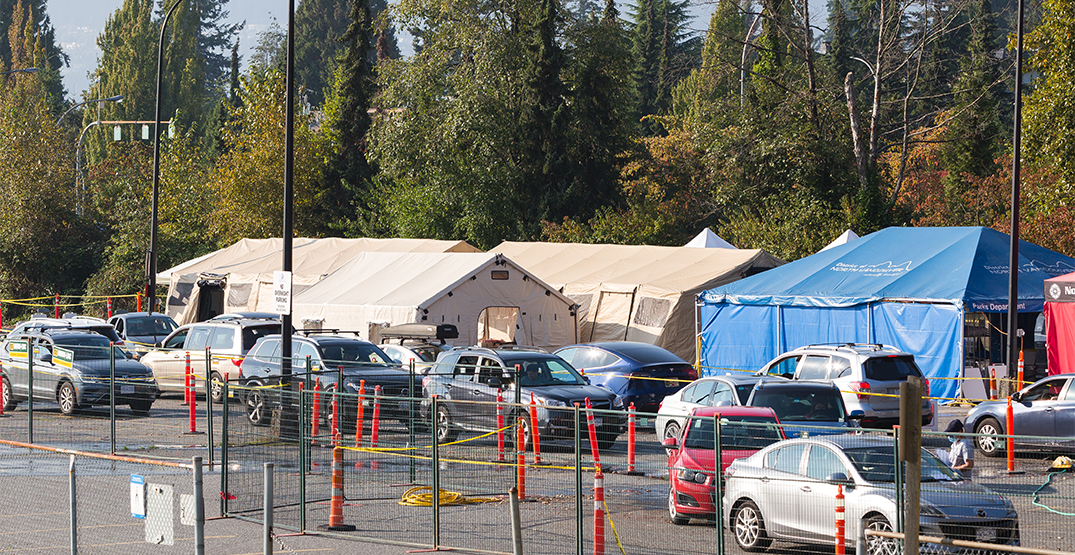 A BC woman received a ticket while in line for a drive-through COVID-19 test during the holiday season, and a Vancouver traffic lawyer says it’s an inappropriate application of distracted driving laws.

Kaytlin Quinn was using speakerphone to talk with her brother during a 2.5-hour wait for a PCR test on December 22 in Burnaby. She had the phone in her hand when she noticed a police officer pull up next to her. The officer asked her to get out of line so he could issue her a ticket for distracted driving.

“It just seemed ridiculous … like catching fish in a barrel,” Quinn told Daily Hive. “On one hand, I understand you’re doing your job. And on the other hand, it just seems like it’s taking advantage of a situation.”

Quinn’s fine was more than $300, and the ticket included points on her insurance that could increase her premiums. After the interaction, the officer allowed Quinn to re-enter the line.

Kyla Lee, a Vancouver lawyer who’s offered to represent Quinn pro bono, said she was surprised and disappointed to learn the officer enforced the law in this way.

“It shocks me that an officer would have voluntarily decided to interact with somebody who might have COVID-19 and get close enough to them to get their driver’s licence, identify them, and serve them a ticket. It’s just not common sense,” she said.

Lee added that the officer must have known that the drivers were trapped at a very stressful time — because of the holidays and because they might have COVID-19.

Quinn’s ticket is also not in the spirit of BC’s distracted driving laws, which are meant to reduce the number of deaths and injuries on the road, Lee said.

At a COVID-19 testing centre, cars are removed from the flow of traffic and separated by pylons. Drivers only need to watch when the car in front of them moves instead of being aware of multiple potential hazards, such as at a red light.

“There’s no appreciable risk in what she was doing,” Lee said. “Other than, you know, not technically being parked as the Motor Vehicle Act requires, she was meeting sort of all of those other exceptions that exist.”

Lee also added that officers use their discretion when issuing tickets, and one thing they’re supposed to do is consider whether a ticket is in the public interest.

A Burnaby RCMP spokesperson, Cpl. Mike Kalanj, confirmed that officers have been on-site at the Willingdon and Canada Way testing station to deal with traffic problems resulting from the hours-long lineups as Omicron cases surge.

“The primary role of the officers on scene is to ensure road safety and prevent collisions, but officers have noted ongoing issues with drivers in line using electronic devices, not wearing seatbelts, blocking intersections, making illegal U-turns and unsafe lane changes, and becoming involved in road rage incidents,” Kalanj said.

Some drivers even try to cut in the testing lineup, which officers are trying to address.

Kalanj did say that another ticket was issued on January 2 after a rideshare driver drove into oncoming traffic trying to get to the front of the line.

“The volume of people attending the BCIT testing site is continuing to have a significant negative impact on traffic around Willingdon, Canada Way and Carey Avenue. These are all main roads for commuters driving through Burnaby. While police are not in the area to issue tickets, we urge those who are waiting in line to put safety first when behind the wheel,” Kalanj said.

COVID-19 case counts have soared in recent weeks in BC, leading to hours-long waits at testing clinics. Officials are now reserving PCR tests for health workers and vulnerable individuals, with others being given rapid tests at testing centres.