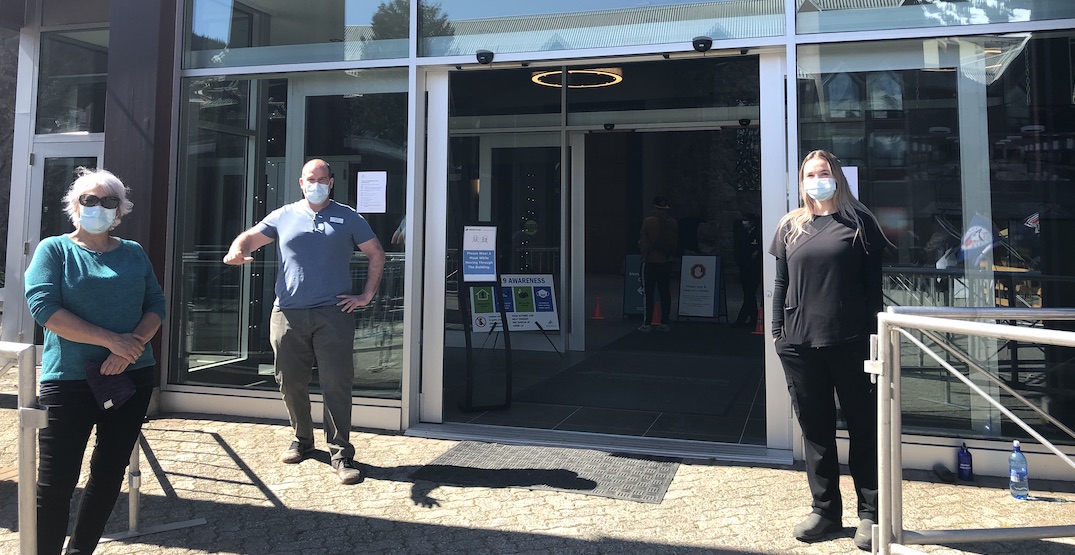 On Monday, adults 18 years of age or older who live or work in Whistler became eligible for the COVID-19 vaccine as part of a new community priority program. That included me.

To preface this article and respond to the backlash regarding the anger some people are directing towards Whistler getting priority vaccinations, my house of 10 people has been as responsible as possible.

We wear masks, remain distant, and stopped going to bars and restaurants a while ago. Still, we’ve had three COVID-19 scares in the past two weeks due to the fact that most of our house works in hospitality and can’t control what their coworkers or restaurant guests get up to.

Although we’ve noticed most people following the guidelines laid out by our local health authorities, 1,505 COVID-19 cases were reported in Whistler between January 1 and April 5.

“Currently, Howe Sound has the highest rate of COVID-19 of any Local Health Area
in the province,” VCH said. “The majority of these cases reside in the Whistler community.”

While we all thank Mayor Jack Crompton for getting us the vaccine, the majority of us Whistler folk are hoping that those who still choose to travel to Whistler from the Lower Mainland respect our distancing rules, wear their masks, and stop asking locals where the parties are — seriously.

Now onto the good stuff, what it was actually like getting the COVID-19 vaccine in Whistler.

When the announcement came that Whistler residents were able to receive the vaccine, I was driving down to Porteau Cove to pick up two friends whose car broke down, ironically, on the way to a dealership to pick up a new car. On my drive over, my house group chat started buzzing like crazy, with all nine people chatting about the vaccine and the fact that registration opened in two minutes.

Being someone who wanted to get the vaccine as soon as possible, I pulled over and opened the booking website. To my surprise, the booking website didn’t crash. My wait time went from 55 minutes to three minutes in a matter of 30 seconds, and I was quickly prompted to type in my name, phone number, and care card number. After that, I was given a week’s worth of appointment dates, which ran every 10 minutes, to pick from.

I selected Tuesday, started my car, and kept driving. Easy.

Going to get the vaccine

I decided to get to the Whistler Conference Centre 15 minutes early in case there was a lineup. To my surprise, besides a packed parking lot, the line was fairly empty. Or so I thought. 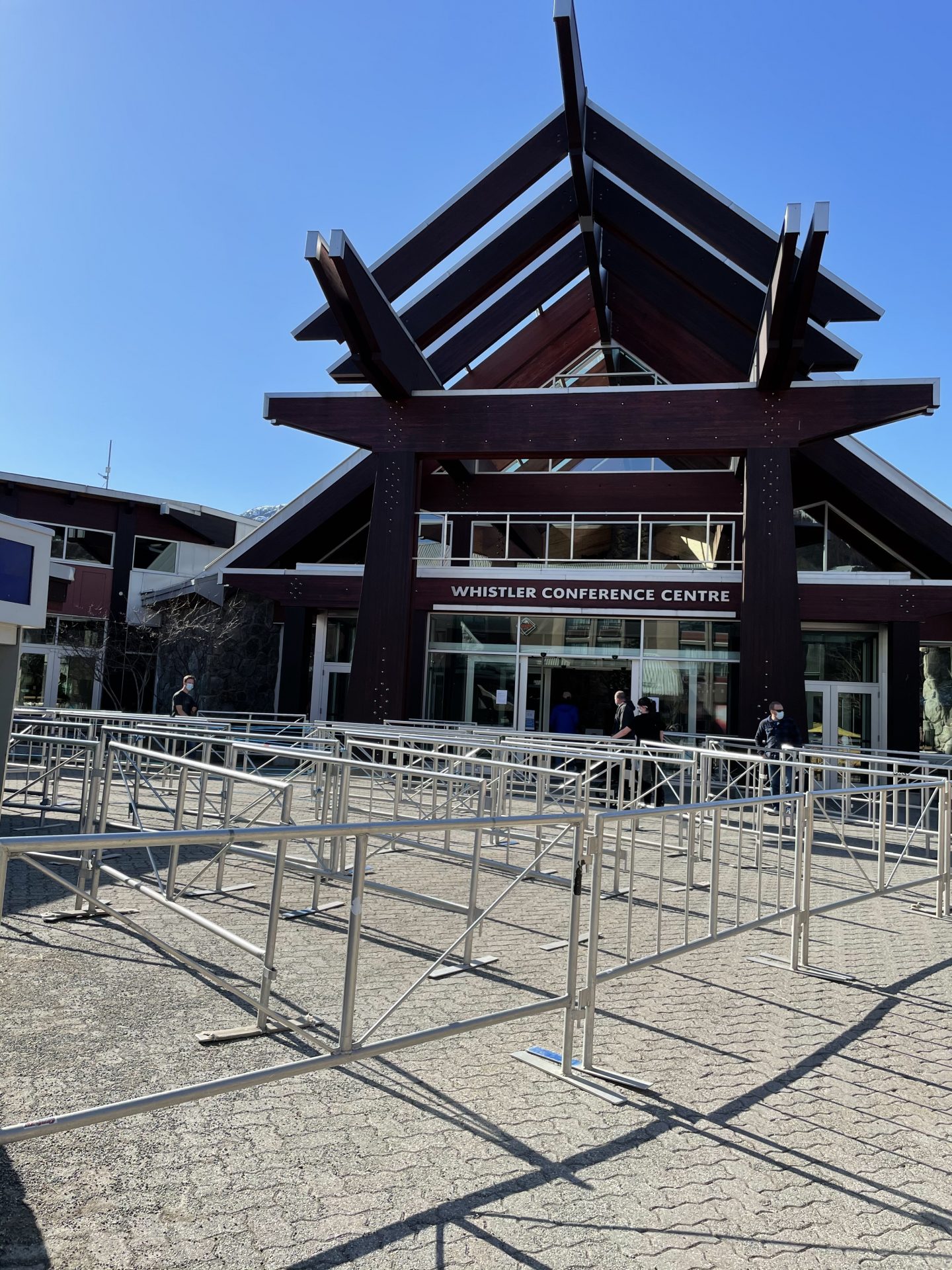 While fencing outside of the entrance was empty, staff members were sending people around the building to properly physically distance themselves.

The bylaw officers were checking IDs and handing out new medical masks, “to ensure that you’re wearing a new mask.” 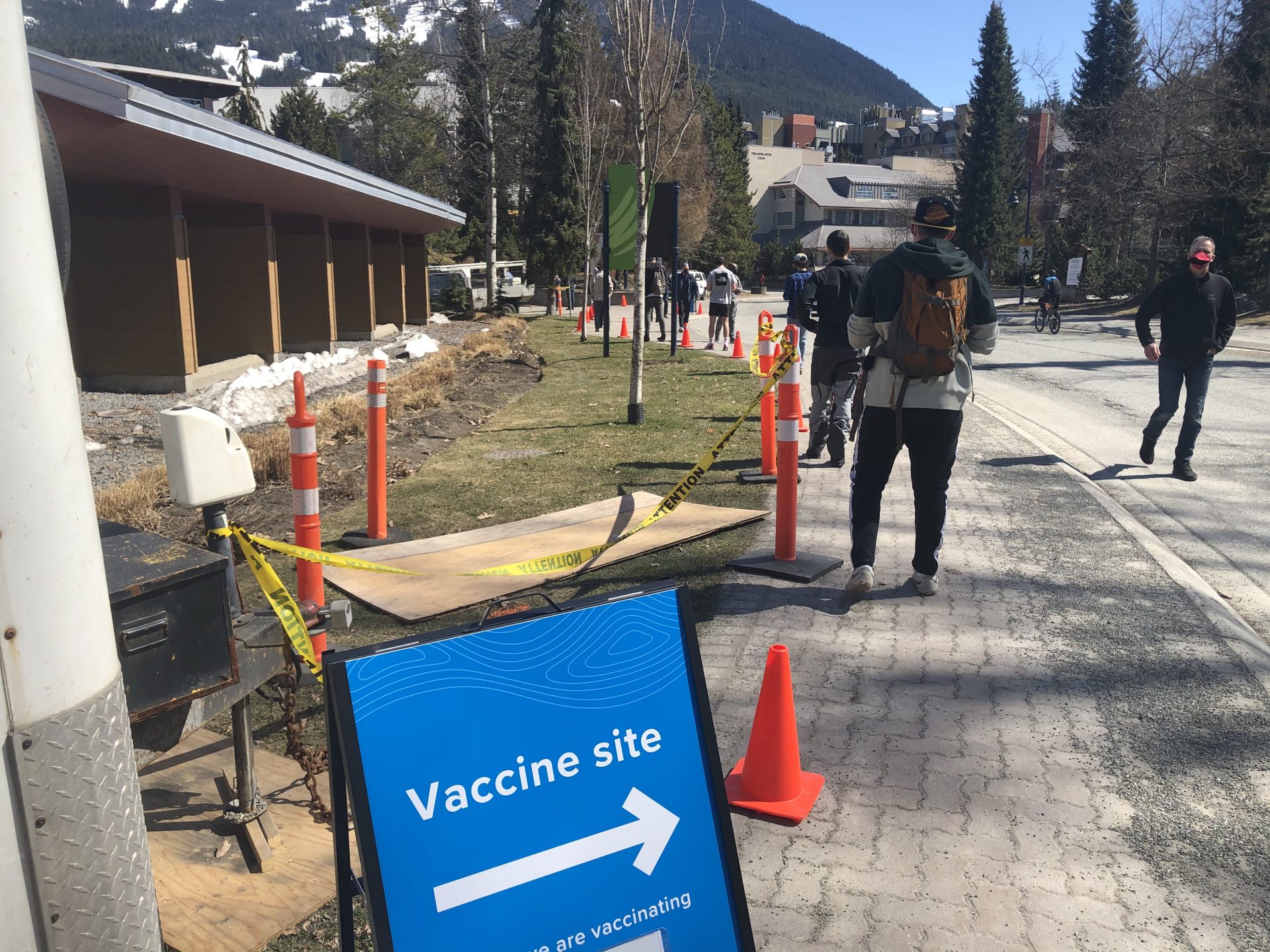 Waiting at the end of the line around the conference center. (Alyssa Therrien) 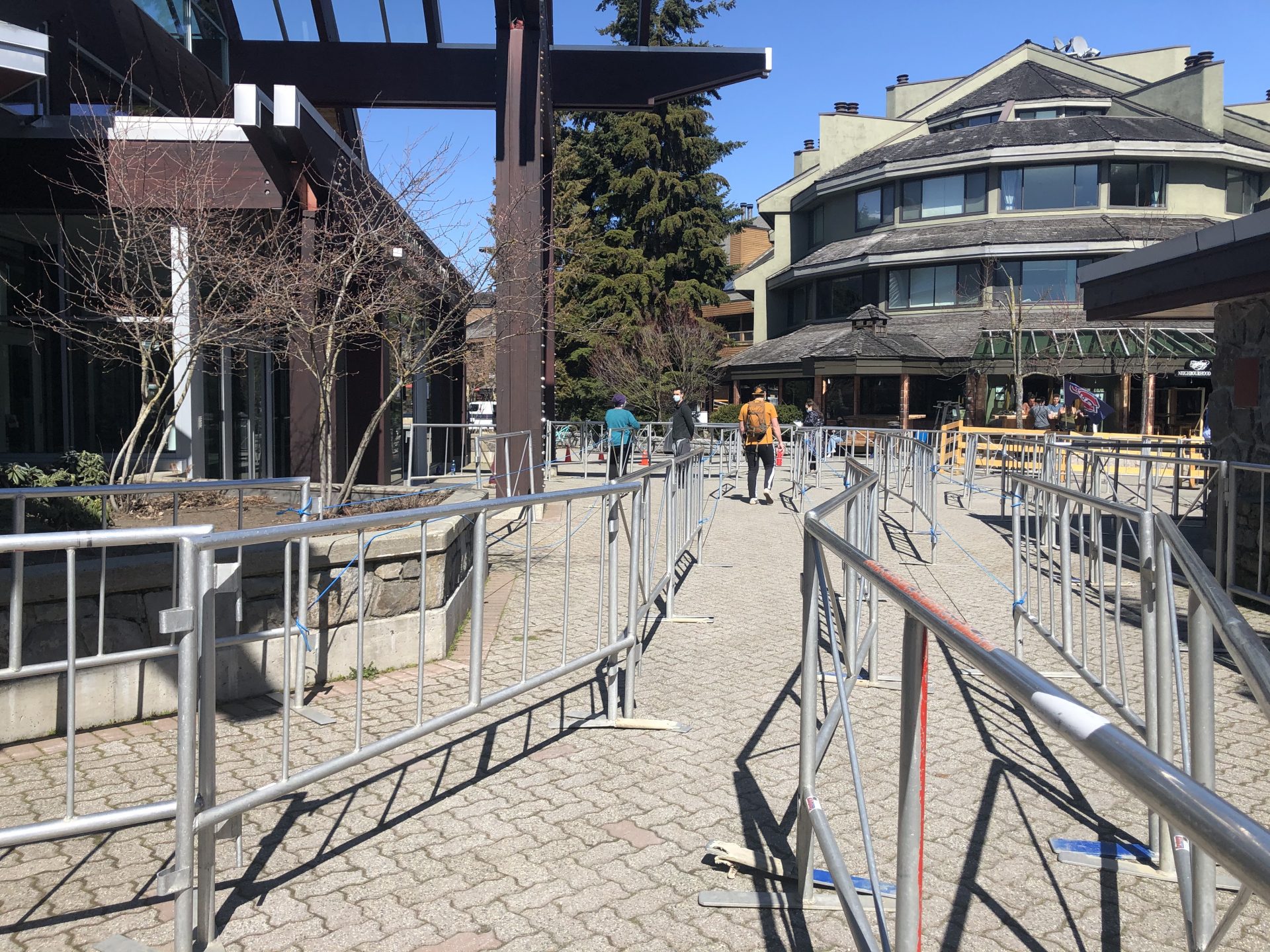 So, so close to registration. (Alyssa Therrien)

Although more and more people kept lining up, I only waited around seven minutes before being let into the fenced area.

Once passing through the Whistler Conference Centre doors to indoor registration, I handed over my ID and was given a “record of COVID-19 immunization” slip and immunization card. I was told that I’d be receiving the Moderna vaccine and then was moved into another line to receive my vaccine.

There were 24 tables set up inside the conference centre. Nurses were stationed at each one, with someone else scurrying around the tables, holding extra Moderna doses in case a nurse had run out. I was told that those administering the vaccines were not allowed to leave their stations, and syringes or doses on the tables were not allowed to be left unattended for any reason.

Behind the vaccination stations, plastic chairs were spread six feet apart for people to wait for possible negative reactions. There were also beds hidden behind a screen, and proctors walking around in case those waiting needed to be wheeled from their chair to a bed.

All around the room, chair lifts by Arts Whistler’s artists were scattered about, bringing a little bit of joy to wandering eyes.

After waiting around three minutes, it was time for my vaccine. I was waved over to a nurse’s station where she asked me about allergies, alerted me about vaccine side effects, and confirmed with me that I did, in fact, want to get the vaccination.

While going over my birthday, we noticed that the person who’d registered me had written 1977 instead of 1997. She had also made an error for my care card number, putting in my driver’s licence number instead of my actual healthcare number.

The nurse, ever so kindly, flagged down a paperwork staff member and made sure that we’d corrected the issue. 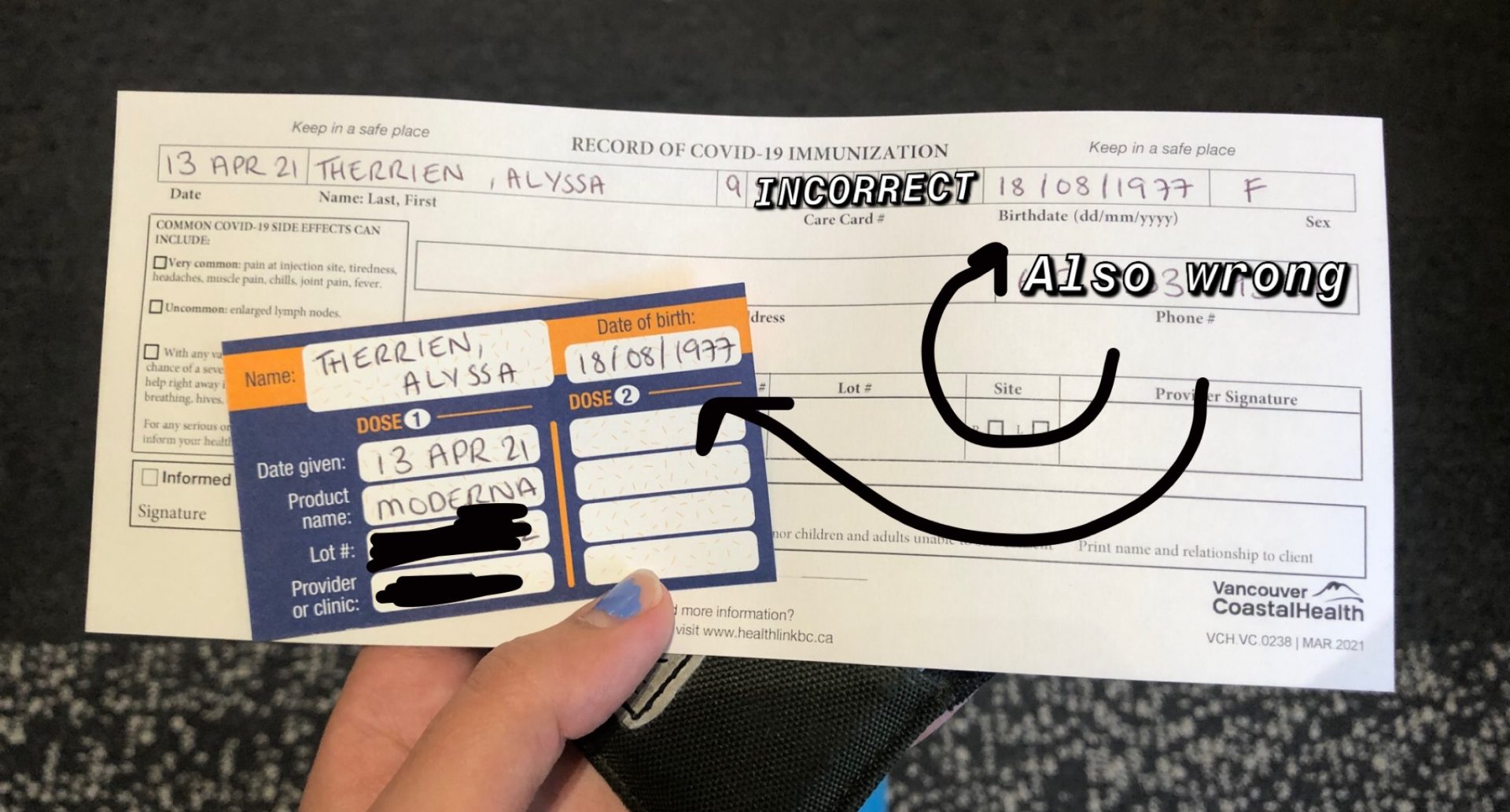 I was told by my nurse that if any “record of COVID-19 immunization” form has incorrect information, the government will not register that you’ve ever received your COVID-19 vaccine. It’s so important to double-check the paperwork!

After that, the nurse then asked me what arm I wanted to be injected in, had me tuck my elbow and relax my shoulders, and within five seconds had vaccinated me.

While I walked over to the waiting portion of the room, I noticed my nurse disinfecting her station. I chose a chair and plopped myself down, being sure to wait all 15 minutes before leaving.

During minute 10, I re-read my paperwork, noticing that there was another mistake. My birthday was written wrongly once again, this time the month and day incorrect (I would say that this was my mistake for being overexcited and forgetting to triple-check, but my partner who got his vaccine two hours later had to ask his registration staffer three separate times to correct the information on his slip).

I waved down a proctor, they ran downstairs to update their computer and change my form, and after another 10 minutes, everything was sorted.

@stolentweetsYou need the paperwork so that you can get your second COVID-19 vaccine!! ##bc ##check ##mistakes♬ original sound – Alyssa

Overall, I’m incredibly grateful to have been able to get the vaccine. Two hours later, I’m still feeling no side effects. I’ve been told to watch out for a sore arm, nausea, and several other symptoms which were listed on a handout, but don’t expect anything other than the norm.

Every single person at the Whistler Conference Centre was welcoming, smiling, and incredibly excited that our little large city is finally getting vaccinated.