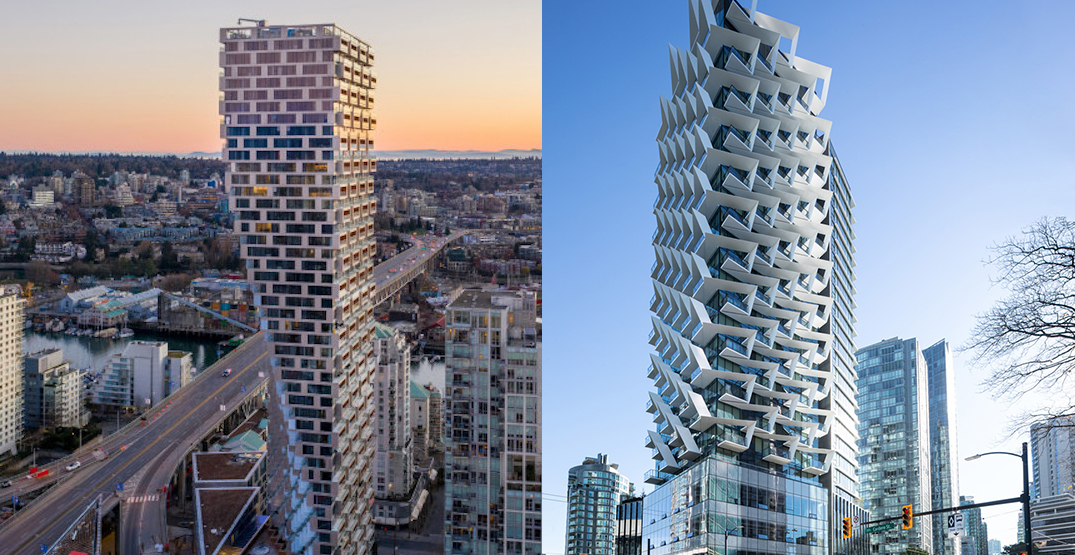 Cardero at 1575 West Georgia Street, completed in 2019, is a 265-ft-tall (81 metres), 26-storey tower with 119 condominiums, and retail and offices within the first five floors. CTBUH awarded this project under the 2021 category of “Best Tall Building Under 100 Metres.”

This tower was developed by Bosa Properties and designed by Henriquez Partners Architects as one of the visual gateways into the downtown core along the West Georgia Corridor from Stanley Park.

It is considered as one of the starchitect designs in the growing cluster of innovative and unique tower architecture in the general area of the northwest corner of the West End and the southwest corner of Coal Harbour. 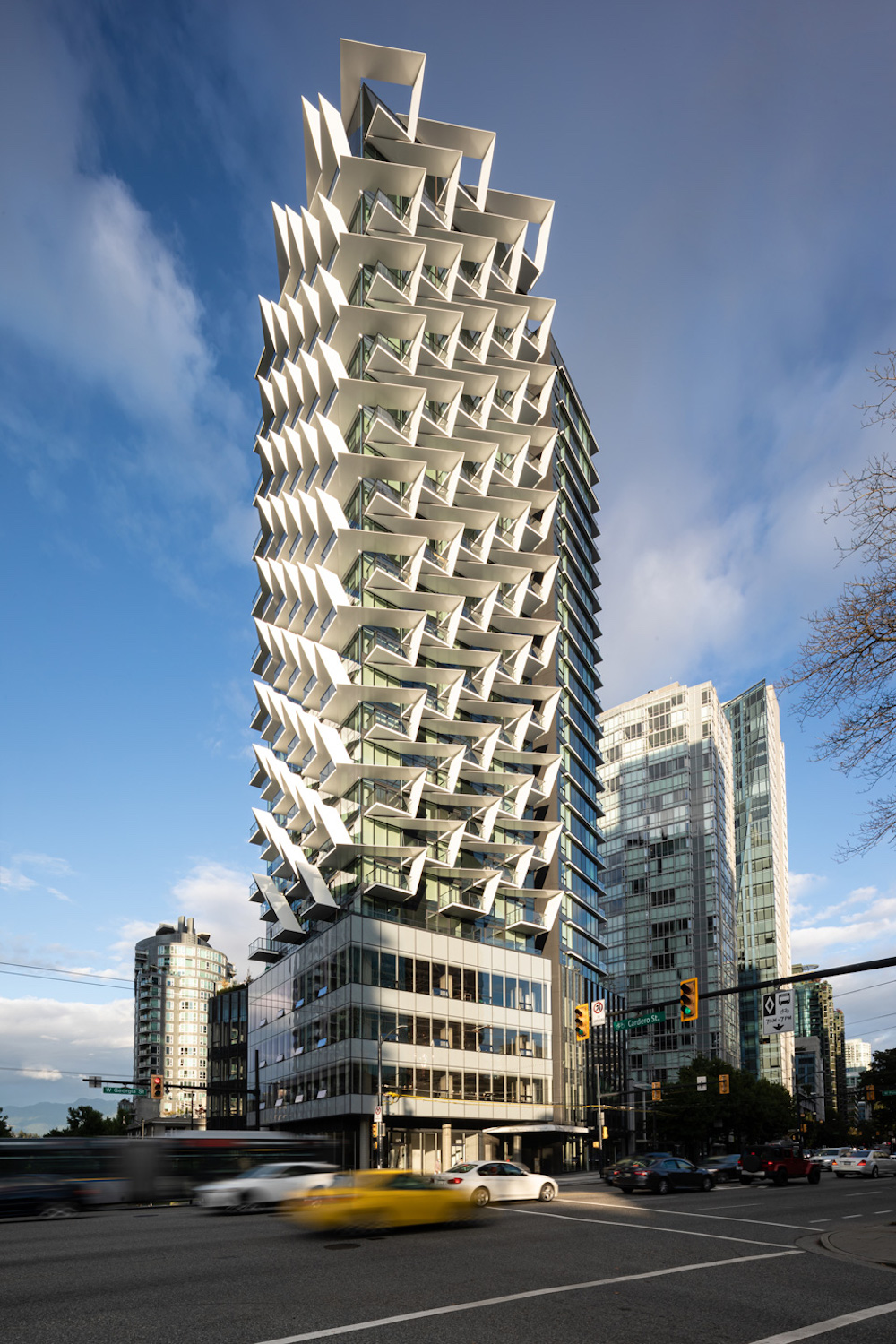 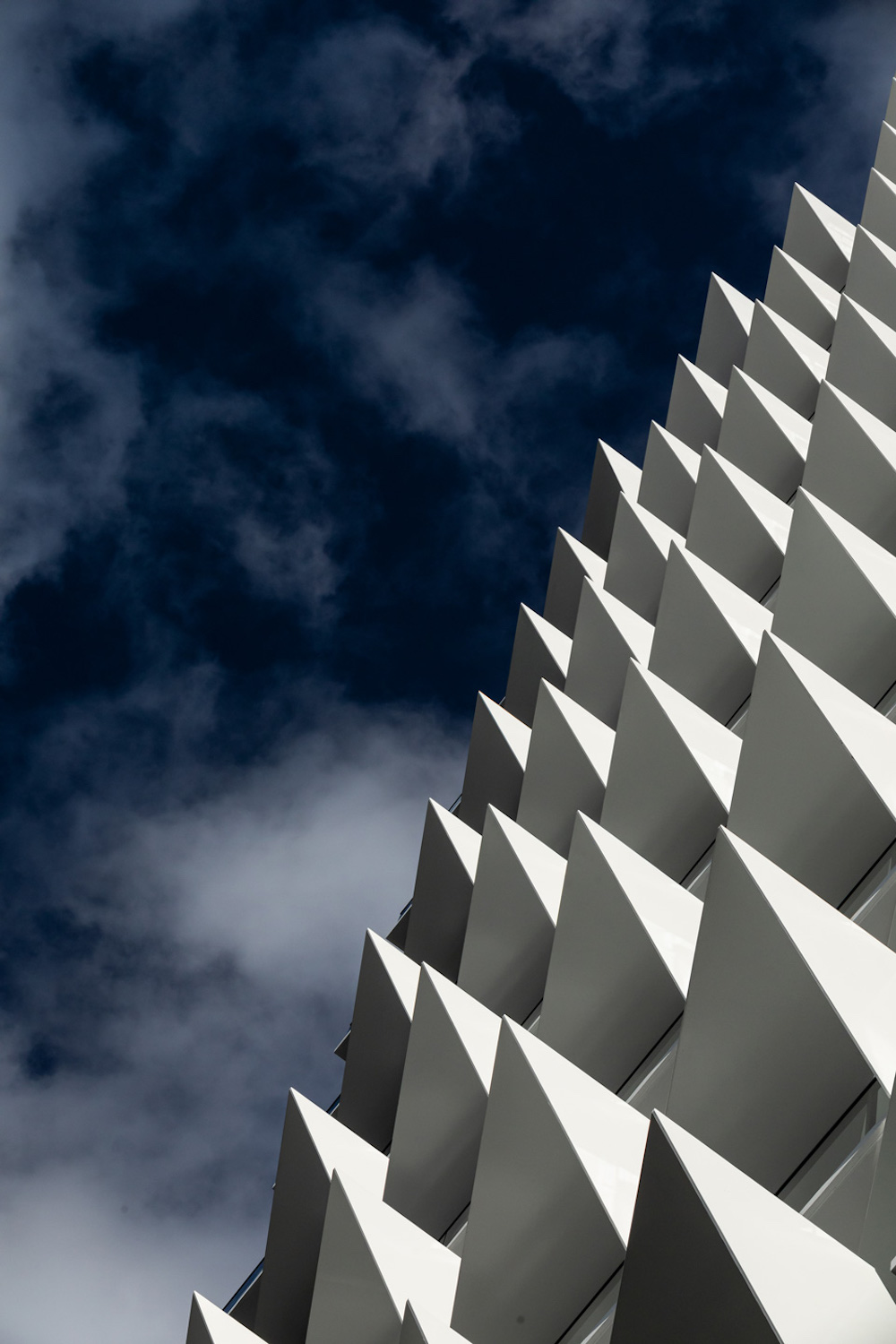 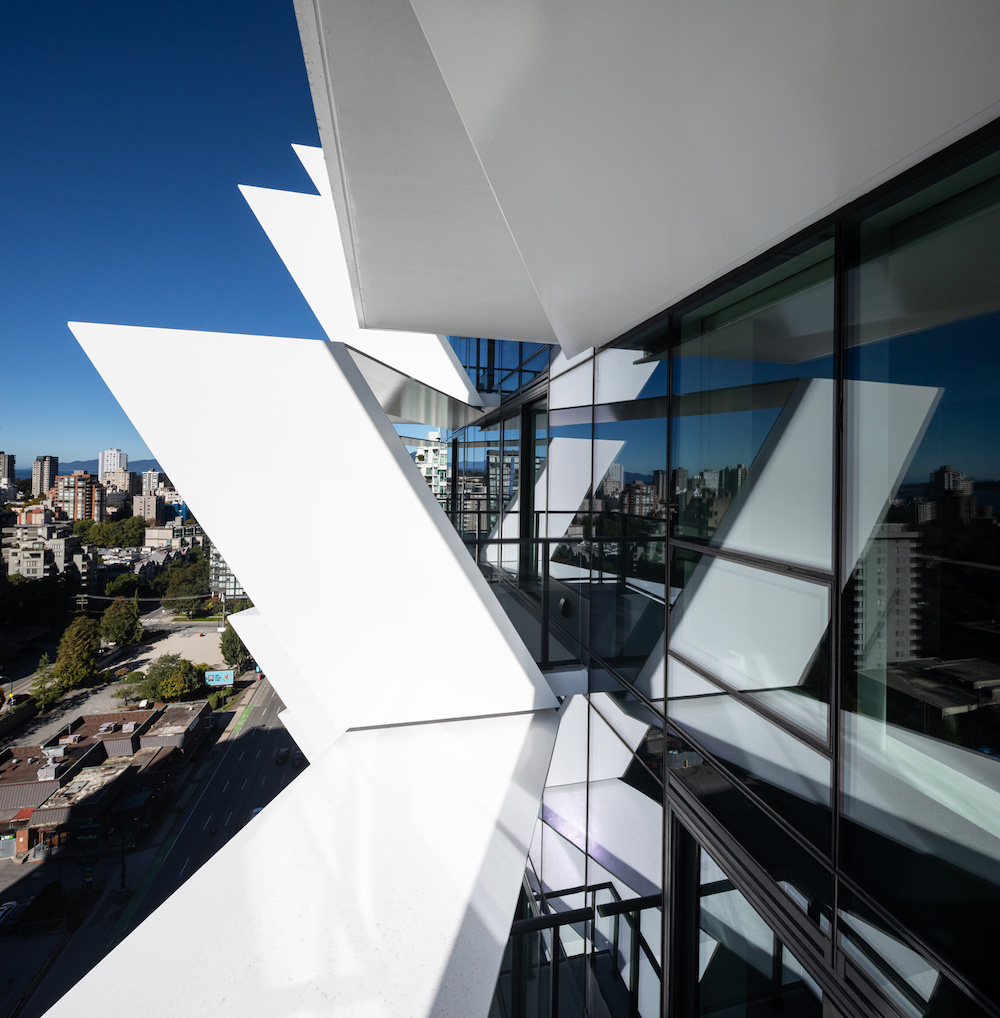 The LEED Gold green building’s main defining feature is its deeply angled, v-shapes of white steel that also serve the functional purpose of providing shading and privacy for the homes, and reducing solar heat gain. The origami-like shapes were inspired by seagulls and the hang gliders on Grouse Mountain.

“Cardero stands out as one of our family’s proudest achievements in more than 50 years of creating homes in Metro Vancouver,” said developer Colin Bosa in a statement.

“We want to make a meaningful long-term impact on the city, and we are proud of the partnership with Henriquez Partners Architects. Together, we worked to create a sustainable, world-class work of architecture that will contribute to the evolution of urban living in Vancouver and be part of shaping the skyline of one of the world’s best cities.”

The other winner is Vancouver House, which won two CTBUH excellence awards in the separate categories of “Best Tall Building 100-199 Metres” and “Best Tall Residential or Hotel Building.” 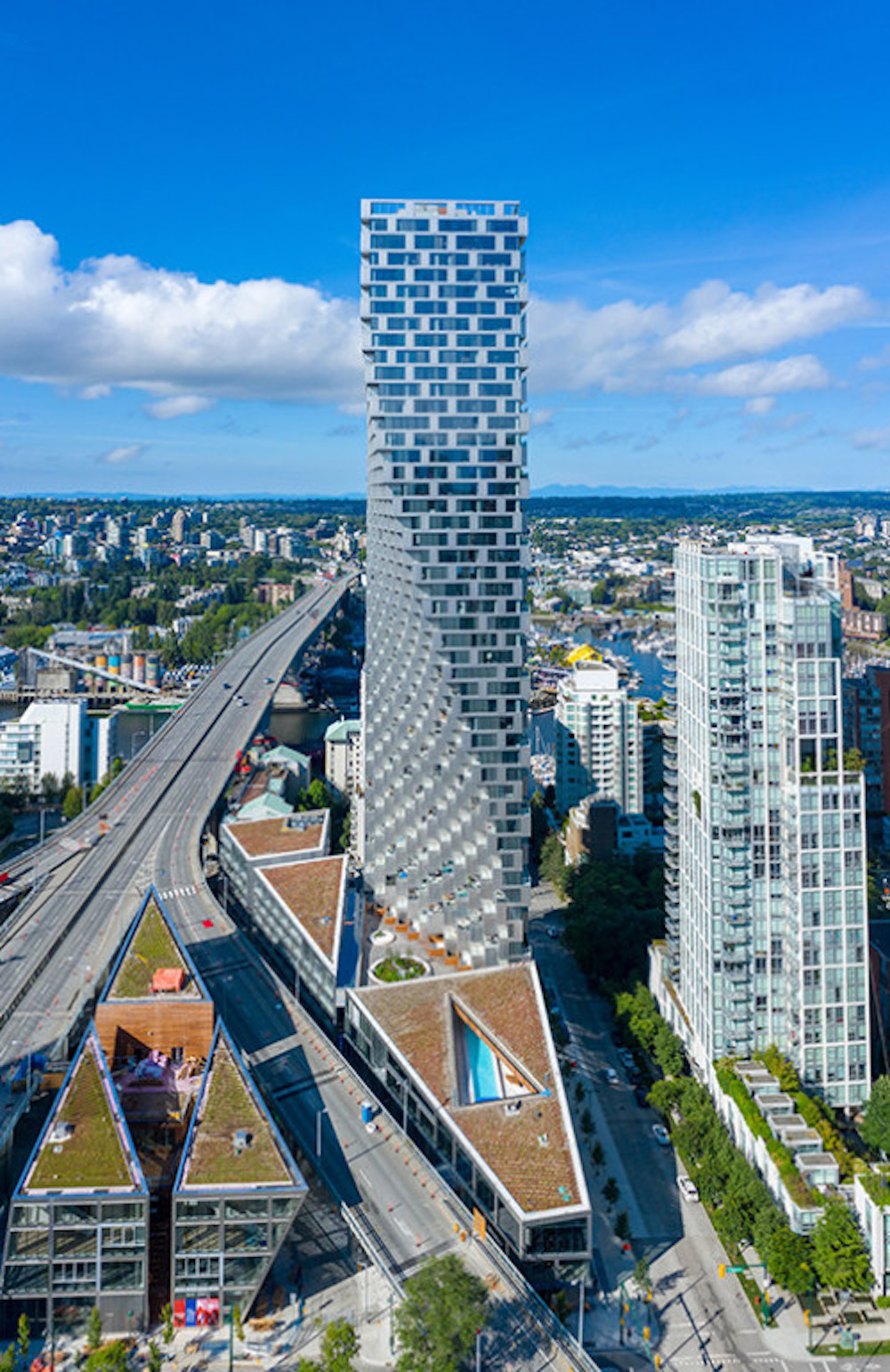 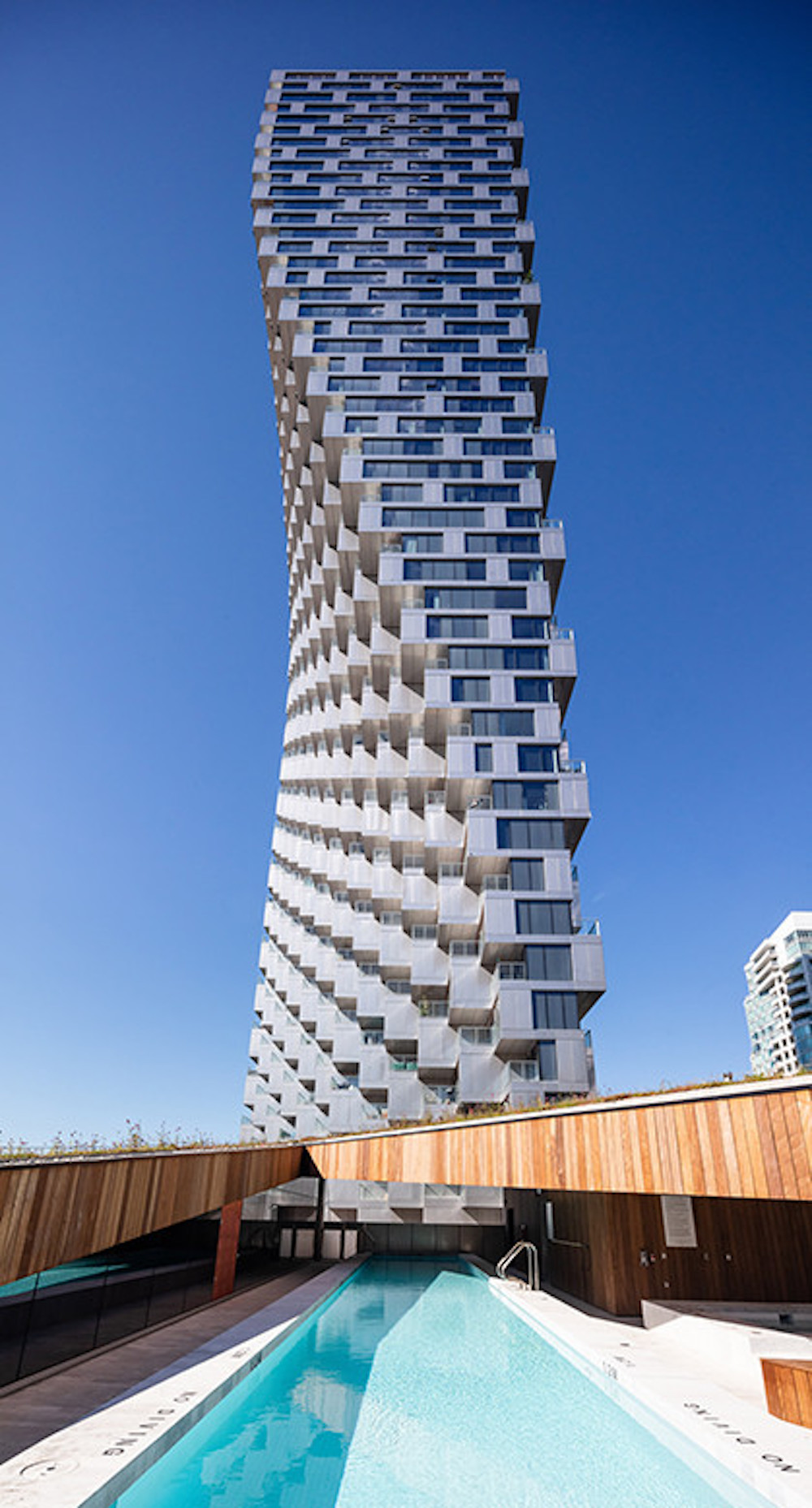 Located at 1480 Howe Street, this project developed by Westbank and designed by Bjarke Ingels Architects reached completion in early 2020.

The 493-ft-tall (150 metres), 49-storey tower fills one of the two gateway tower sites envisioned by the municipal government for the north end of Granville Street Bridge.

Vancouver House has a triangular base and gradually rises to a rectangular peak, appearing to defy the laws of engineering when viewed from afar. The tower contains 375 condominiums and 105 secured market rental homes, plus retail and restaurant spaces in its base including anchors London Drugs and Fresh St. Market grocery store. 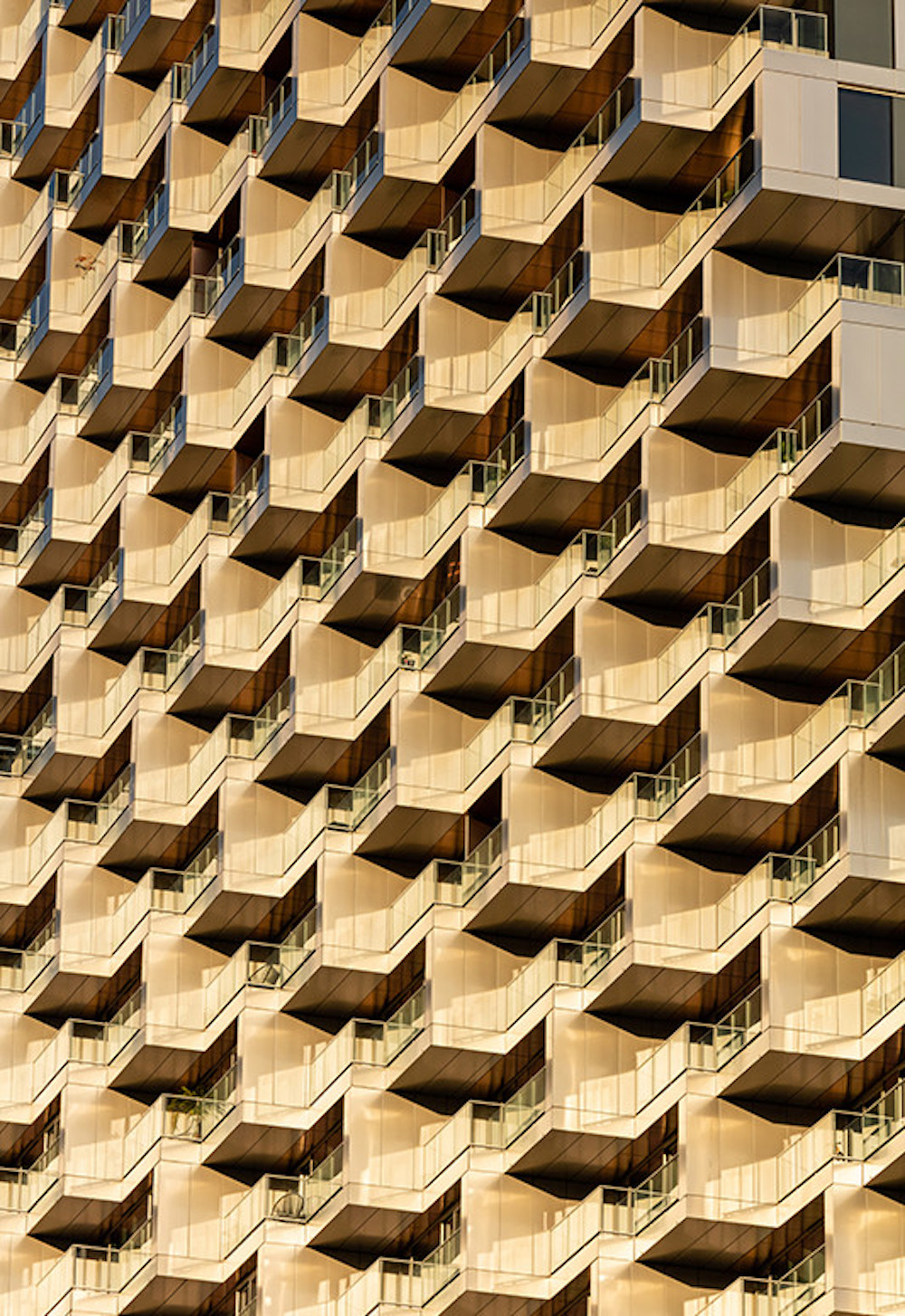 Vancouver House also gained global recognition for its design early last year, when CNN named it as one of the world’s most anticipated buildings in 2020.

Both Cardero and Vancouver House will also compete for the title of Overall Category winner in their respective “Award of Excellence” categories. Winners of each height category will also be judged for the ultimate award of the “2021 Best Tall Building Worldwide.”

The annual awards are usually staged at CBTUH’s conference in Chicago, but this year they will be held virtually in May.