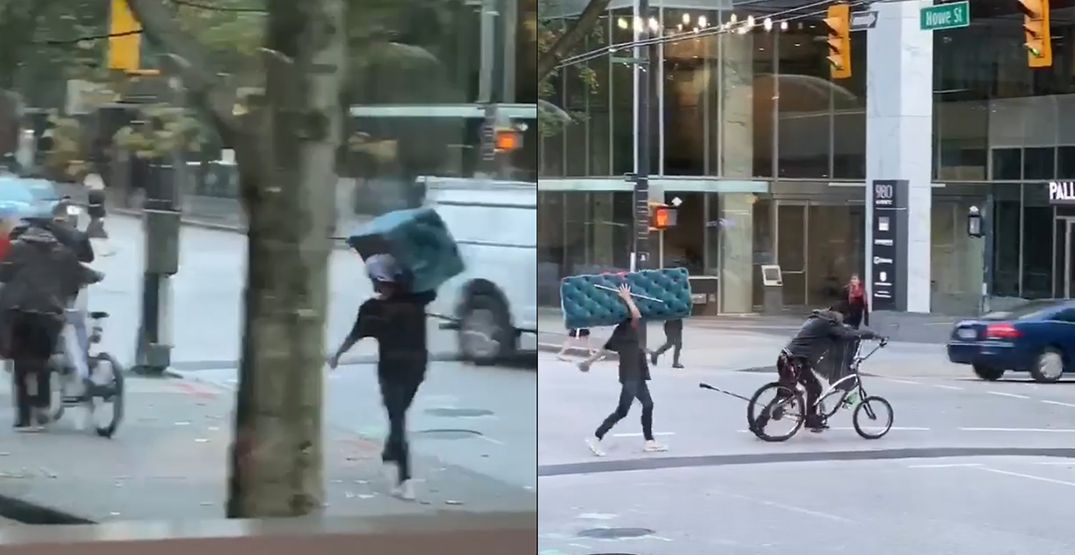 Someone stole a couch from a downtown Vancouver store Monday afternoon, and staff recorded the thief carrying the blue ottoman down the street.

CityLux Boutique posted about the ordeal on their Instagram story Tuesday, sharing security footage of a woman dragging the blue seat out door before slinging it over her shoulder and carrying it away.

“It was just so bizarre how brazen it was,” owner Sunan Spriggs told Daily Hive in an interview.

Spriggs trains her shop staff not to confront people who steal merchandise, because the individual could be come violent.

On Monday, a customer saw what direction the thief went, and staff flagged down police for help. The couch was stolen just before 5 pm, and officers found the suspects and the couch in a nearby alleyway shortly after.

Cpl. Tania Visintin with the Vancouver Police Department said officers released the suspects and are continuing to gather evidence about the theft. Visintin added the couch was returned to the boutique.

CityLux shared footage of the plush settee on top of a police car, thanking police for helping get their couch back.

Spriggs added she’d like to see more supports for people who may be homeless or using drugs, because this is not her first encounter with an aggressive individual she’s had at the store.

“The couch … is kind of funny. But it speaks to a larger issue,” she said.