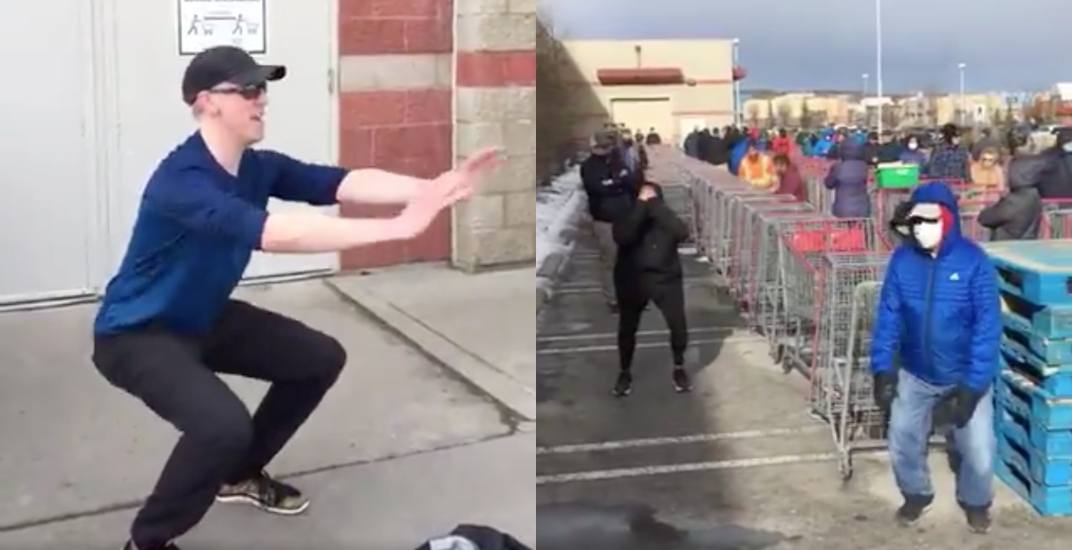 What started off as a mundane activity became a life-changing moment for Dr. David Keegan while waiting in line to get into Costco in Northwest Calgary.

And it all started in a simple effort to keep warm.

Stuck in a 45-minute lineup to buy groceries, the Newfoundland native began doing lunges every time the line inched forward to get some exercise.

The solo venture quickly turned into a group activity, and before he knew it, Keegan was leading a lineup workout for the next 20 minutes.

I was standing in the lineup to get into @costcocanada @costco and got a bit cold, so started doing lunges, and I ended up leading a #lineupworkout ! pic.twitter.com/w2IZIGJPkT

“As I went around the corner I thought ‘hey, we should do all this together,'” Keegan said in an interview with Daily Hive. “I said ‘alright everybody, we’re here at the Costco lineup, so it’s time for a Costco workout! How about this: I’ll lead you in some exercises and away we’ll go.'”

Keegan captured everyone’s attention right away, with some pulling out their phones and others following his lead.

“People literally jumped right in,” Keegan said. “We went from bored and cold, to happy and warm, and that’s a pretty cool thing in these times.”

Keegan not only led the group in lunges, squats, and jumping jacks, he gave teaching points like how to engage your core.

“I tried to not just lead people in a workout, but also make sure that they knew some of the key ways to get the best value out of these things.”

Keegan was buying groceries in advance of his daughter returning home from an exchange trip to France, where she had been stuck after she developed a cold the day before her flight was scheduled.

Ironically, Keegan, who is an academic family doctor with the University of Calgary, had the ability to cut the line. But despite qualifying as a healthcare professional, he decided that wouldn’t be appropriate.

Good thing too, because what he discovered will have a more lasting effect than saving 45 minutes on a chilly day.

“Why can’t we do more to embrace physical activity in our lives?” Keegan wondered aloud. “I think I’m going to be doing squats and lunges in lineups, and I don’t care if people think I’m crazy or whatever. I think I might just do this now for the rest of my life. Because, why not?”

Keegan met all sorts of people while in line, including a woman named Maureen behind him who he has since become friends with. She’s the one that deserves filming credit on the videos he posted. He also spoke to a woman named Jess, who helped lead the crowd in exercise after Keegan went around the corner.

“This is a challenging time for all of us. People are struggling in various ways,” said Keegan, who said the social aspect of the group exercise was as important as the physical activity.

If you’d like to get in on the fun, Keegan is challenging everyone to do their own lineup exercises, using the hashtag #lineupworkout.