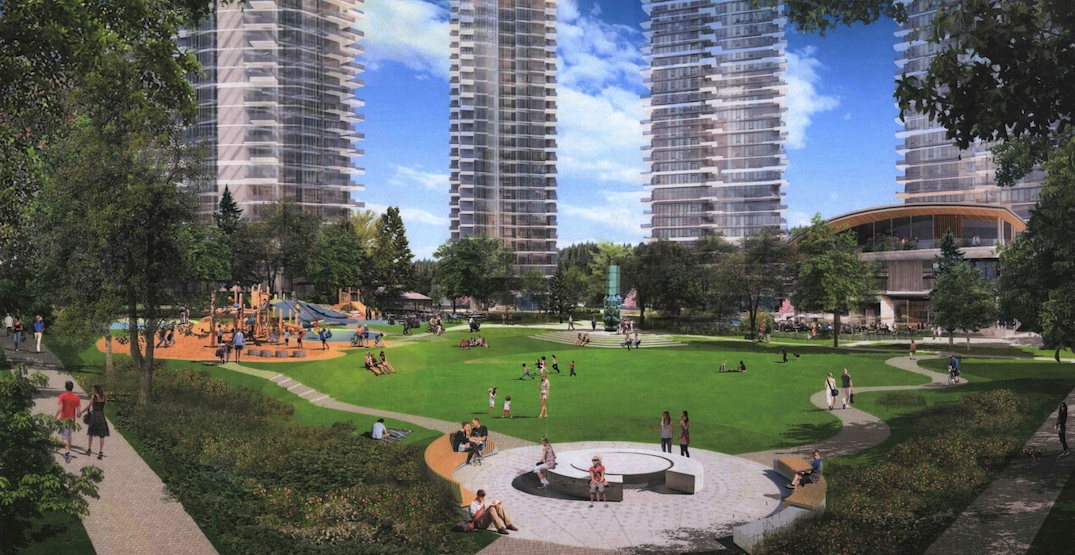 Creative mortgage solutions for all situations, from residential to development and construction — giving you the freedom to do want you want. Visit Freedom Capital to learn more.

Another massive neighbourhood-sized, high-density residential redevelopment is proposed near SkyTrain Inlet Station, located on the Coquitlam side of the transit-oriented area’s municipal border with Port Moody.

Local developer Polygon Homes has submitted an application to the City of Coquitlam to redevelop a 10-acre land assembly consisting of the former Coronation Park Elementary School site and eight smaller lots, with the addresses of 135 Balmoral Drive and 2518-2548 Palmer Avenue. The site’s southwest corner is just a seven-minute walk from the SkyTrain station.

Polygon’s proposal is not to be confused for Wesgroup’s 15-acre Coronation Park neighbourhood redevelopment proposal immediately to the west in Port Moody. 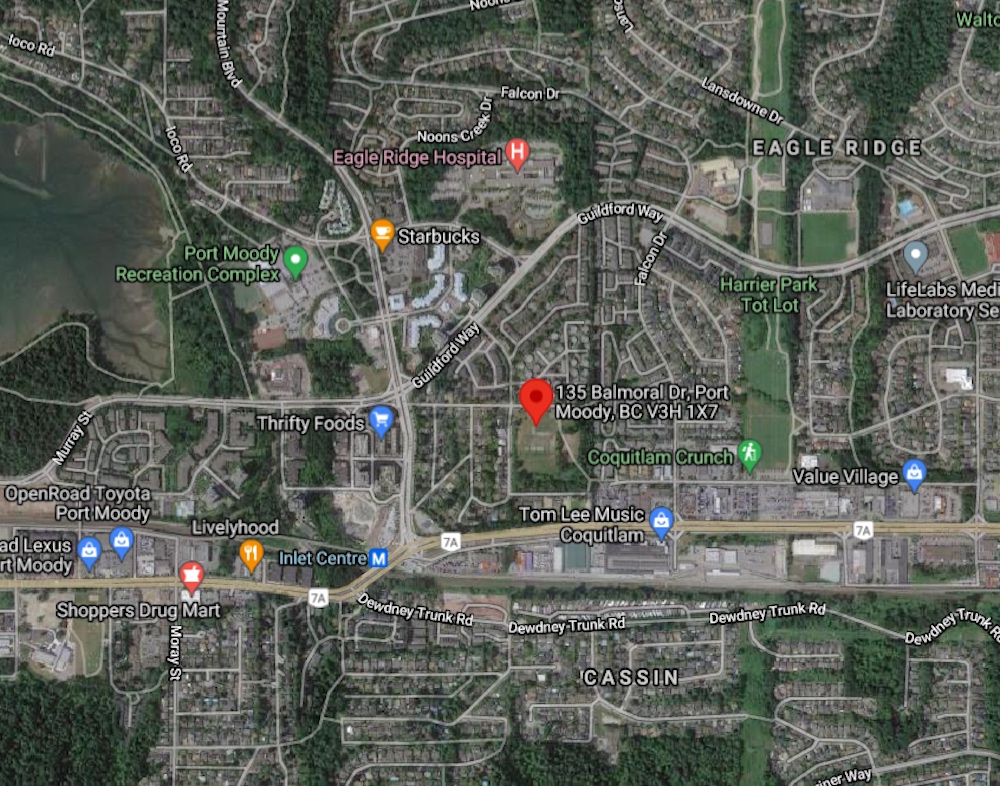 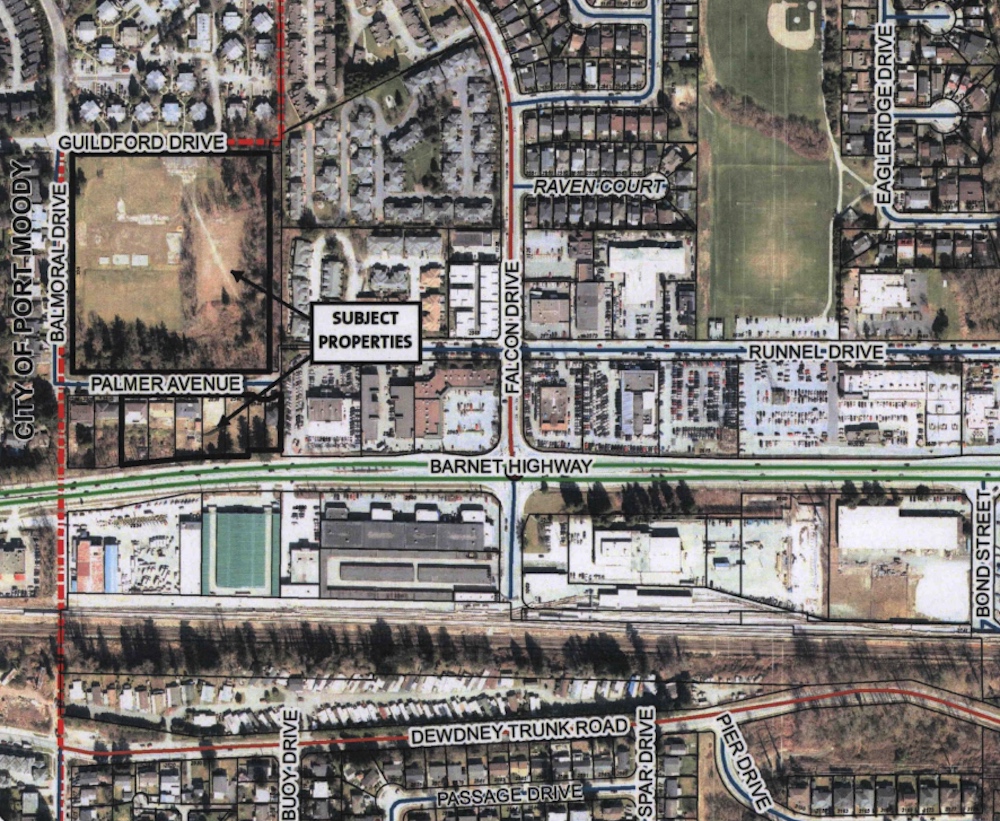 Based on the application, Polygon intends to redevelop the site — named Coronation Heights — into eight towers reaching up to 50 storeys, including two rental housing towers.

There would be a total of 2,558 homes, including 1,968 condominium homes, 492 market rental homes, and 98 below-market rental homes. Altogether, these units combined would provide homes for an estimated 5,100 people.

Residents would have access to a 24,000 sq ft standalone indoor amenity building that consolidates the complex’s indoor amenity spaces into one larger facility. A 6,000 sq ft childcare facility for 37 kids would also be integrated into the market rental housing tower. 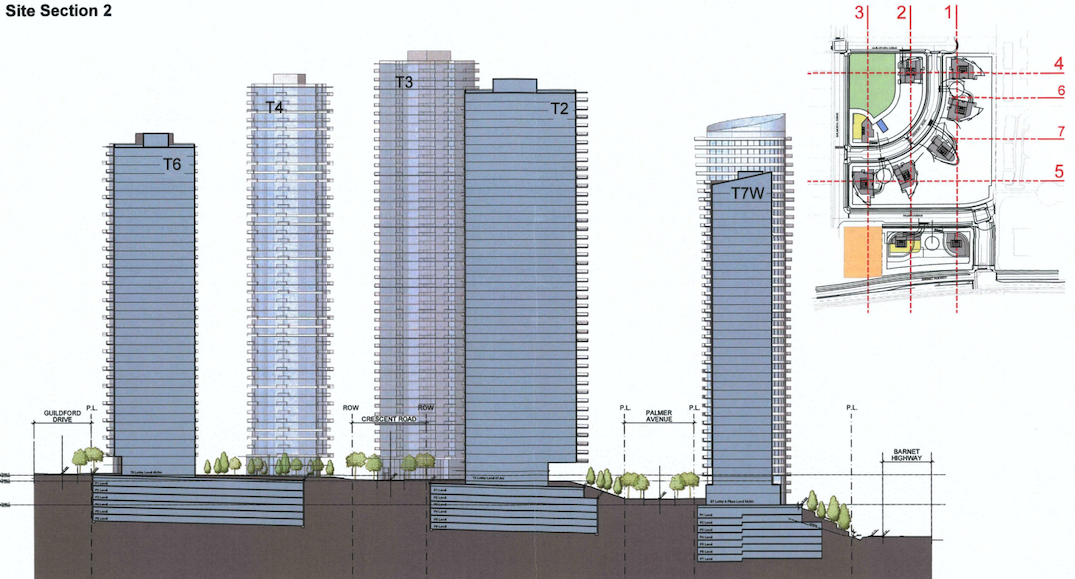 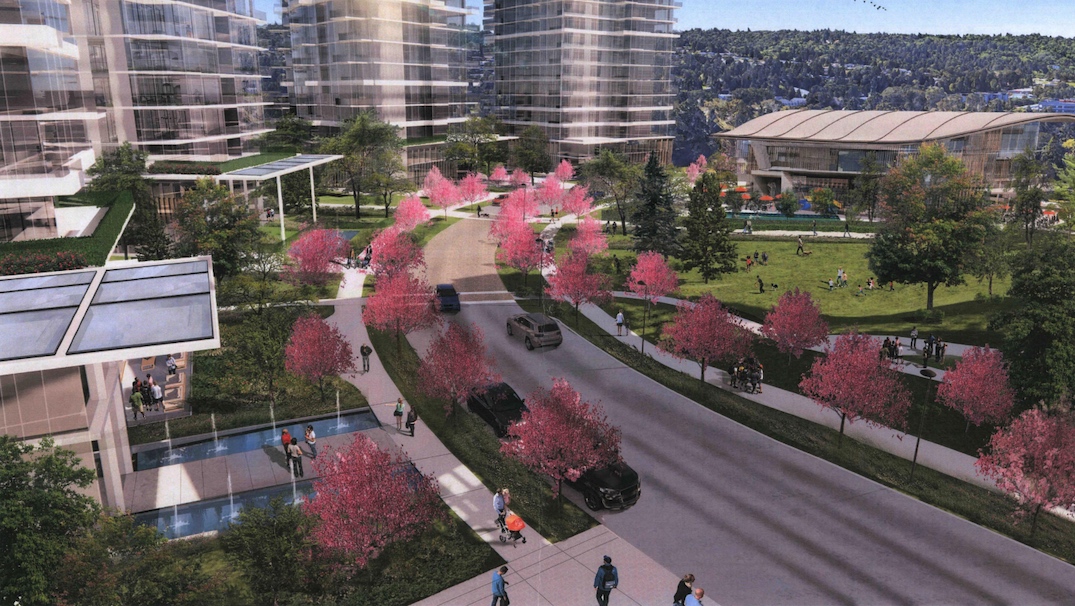 Outdoor spaces include a one-acre public park at the northwest corner of the site, plus about three acres of private and publicly accessible open spaces and pedestrian pathways. New public roadways would also be constructed to improve connectivity.

Despite the size of the residential population, the redevelopment will only have a minor neighbourhood-serving retail/restaurant space component of 3,600 sq ft.

Preliminary details suggest a total floor area of roughly 2.3 million sq ft, providing a floor area ratio density of a floor area that is 5.22 times larger than the size of the land assembly. To accomplish this, the developer plans to acquire 2545 Palmer Avenue, one of the smaller lots, from the municipal government. 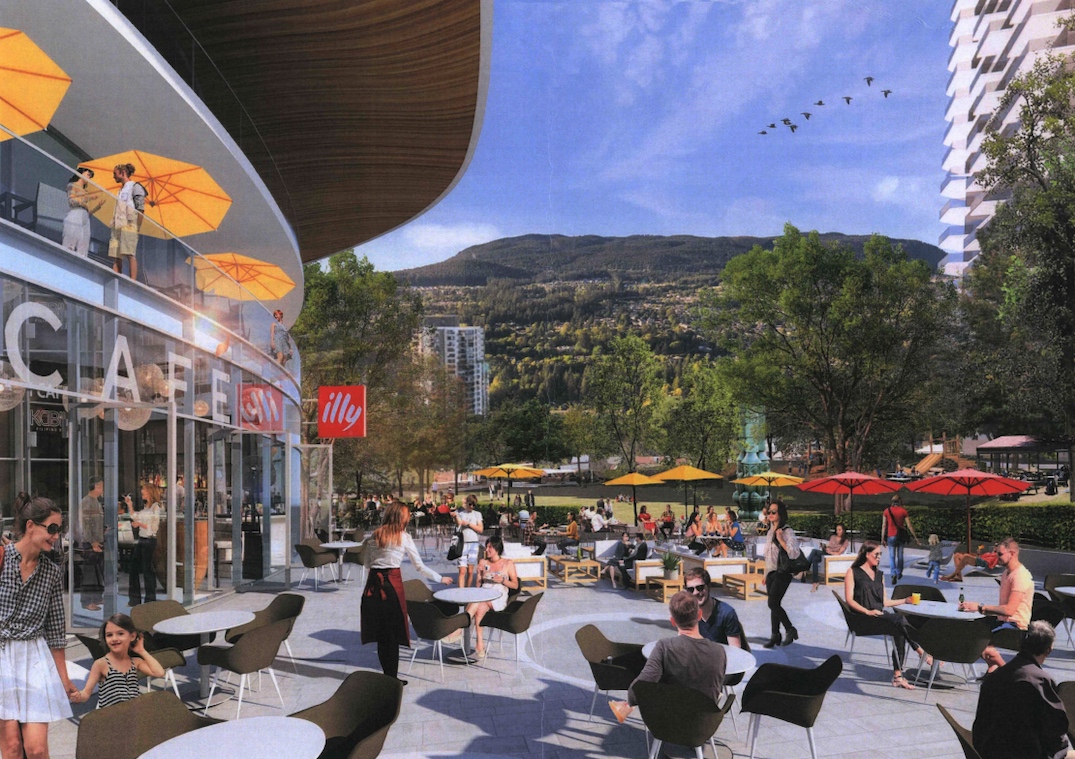 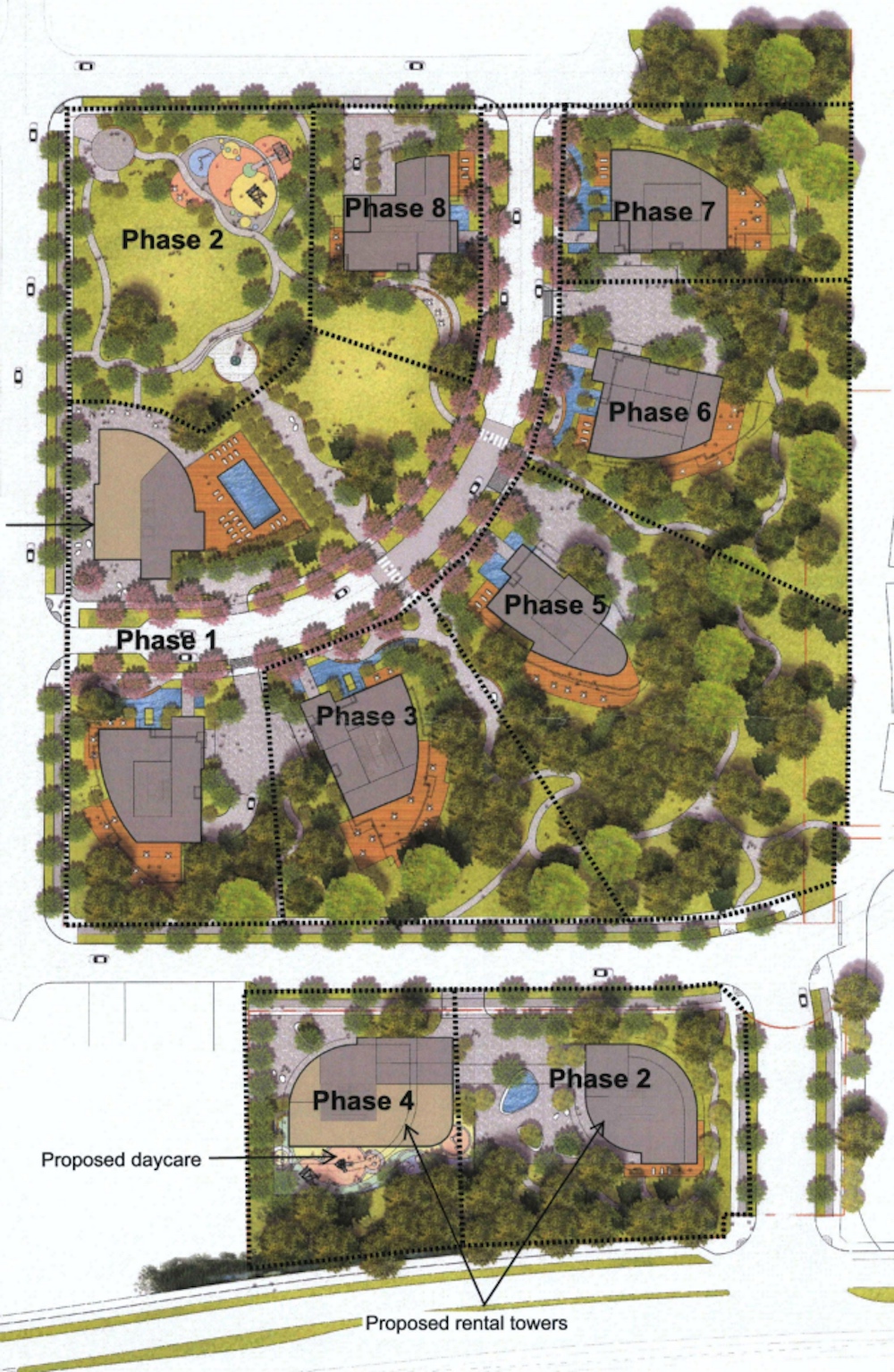 Coronation Park Elementary School first opened at 135 Balmoral Drive in 1963, and closed in 2007 due to its poor condition, with student enrolment growth redirected to other nearby schools. In 2016, Coquitlam’s school board approved the $25-million sale of the unused school site to Polygon, with the proceeds directed towards funding renovations on other schools.

Polygon’s form of development and density is permitted under Coquitlam’s recently approved City Centre Area Plan (CCAP), which prioritizes the intensification of transit-oriented development. CCAP also calls for the future construction of an additional SkyTrain station at Falcon Drive, next to the SkyTrain operations and maintenance in the area — about a five-minute walk from the southeast corner of the Polygon development site.

Polygon is planning to construct the entire redevelopment over eight phases through 2038. If the proposal is approved, the developer would provide the municipal government with a combined estimated total of $120 million in public benefits — density bonuses, development cost charges, and community amenity contributions.

The application is currently in its early review stage with city staff, but it could reach city council’s consideration for first reading by the middle of 2022.

Just to the west in Port Moody, Wesgroup’s Coronation Park proposal calls for five towers up to 40 storeys with a total of 2,945 homes. Wesgroup is hoping Port Moody City Council will reach a decision on this separate project by the end of 2022.

Both the Polygon and Wesgroup projects would generate a combined total of about 5,500 homes, providing a major ridership boost for Inlet Centre Station, which currently sees some of the lowest ridership on the entire SkyTrain network. 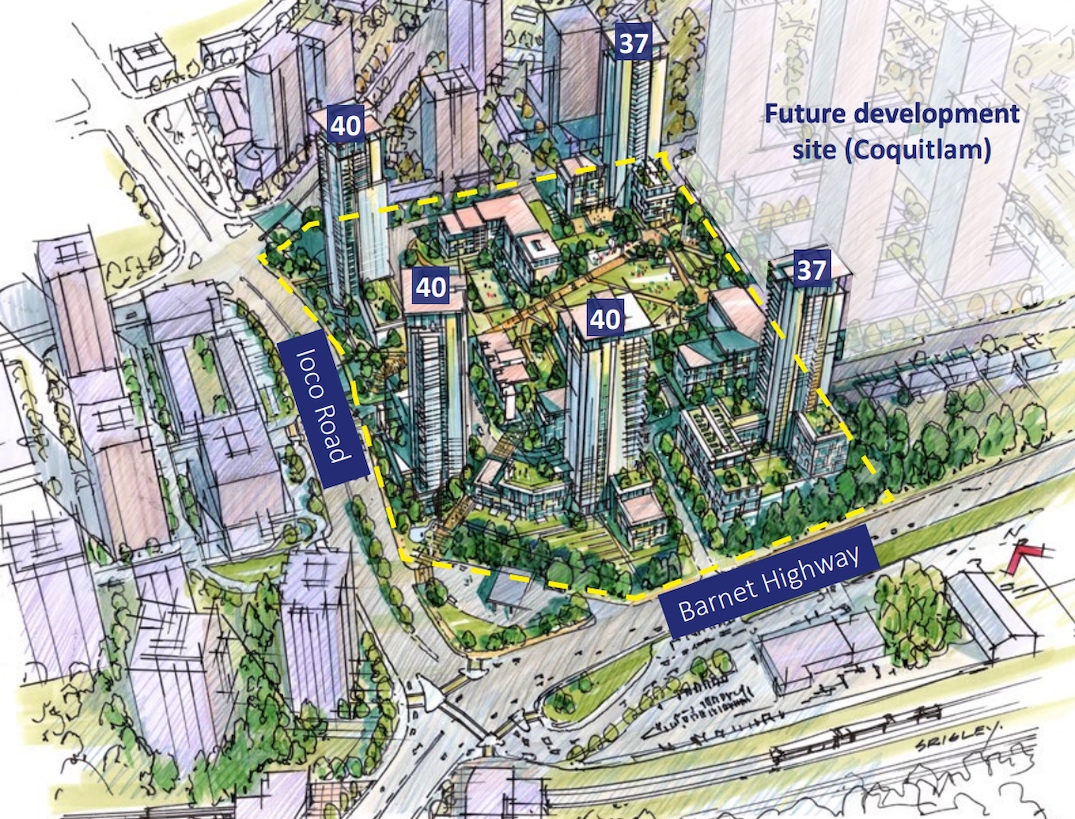