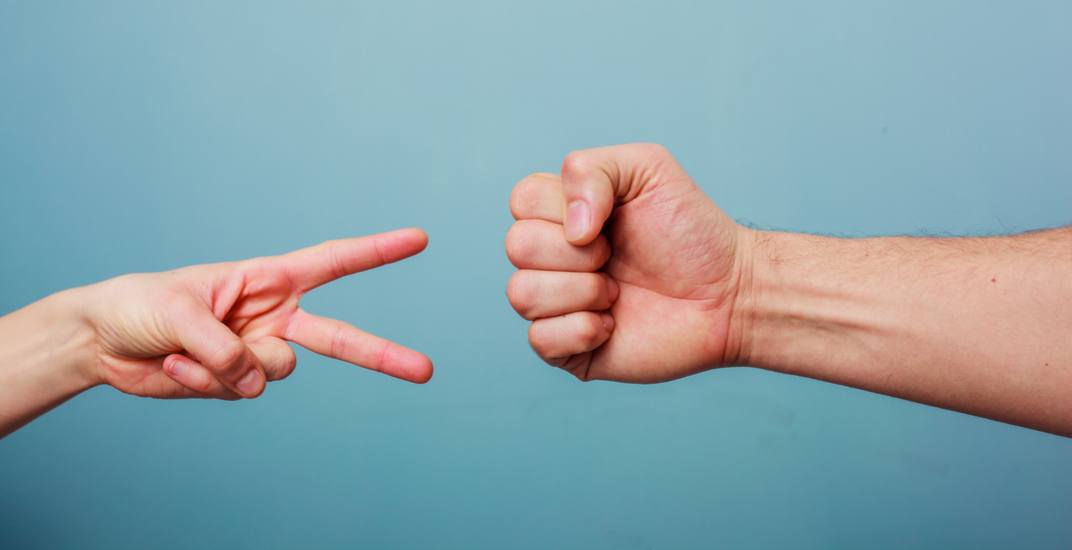 Mondays suck – but they suck less when you go to Corduroy Restaurant in Kitsilano.

It’s not just because they offer a selection of craft beer, ciders, wines, and cocktails. Or because they serve up an array of dinner dishes like tacos, poutine, deep fried mac and cheese sticks, and ice cream doughnut sandwiches (just to name a few).

It’s because on Mondays, this Cornwall Avenue bar puts on an event that marries the nostalgia of one of our favourite childhood games and the heated competitive nature we’ve picked up throughout our adult years into one magical game: Rock, Paper, Corduroy.

This is essentially a bar-wide Rock, Paper, Scissors tournament (just replace Scissors with Corduroy when you say it) and it kicks off with a $5 buy-in and registration staying every Monday night at 9 pm.

The competition itself starts a 10 pm, where two individuals at a time are randomly drawn out of a hat to come up to the stage and face off in a single elimination-style besot of 5-7 tournament.

The players’ often-hilarious fake bio’s are read aloud by charismatic referee and host Scott Patey as the approach the stage.

From there it’s a twisted tale of trash talk, fumbles, audience participation, and ultimately, great victories. First and second place winners will be awarded prizes such as gift cards, beer, and more.

For all the losers, don’t worry, there’s something for you too – drink deals. $3.50 pints and highballs all night long.

So grab a Corduroy Lager (PBR) and crack those knuckles – it’s time to get involved in some Rock, Paper, Corduroy!

When: Monday nights at 9 pm
Where: 1943 Cornwall Avenue, Vancouver
Cost: $5 per person

This post was brought to you by Glance Pay Mobile Payments, an app that’s revolutionizing how smartphone users dine, instantly pay, and track digital receipts while accessing deals and earning exclusive rewards. Find the free Glance Pay app on iTunes or Google Play.