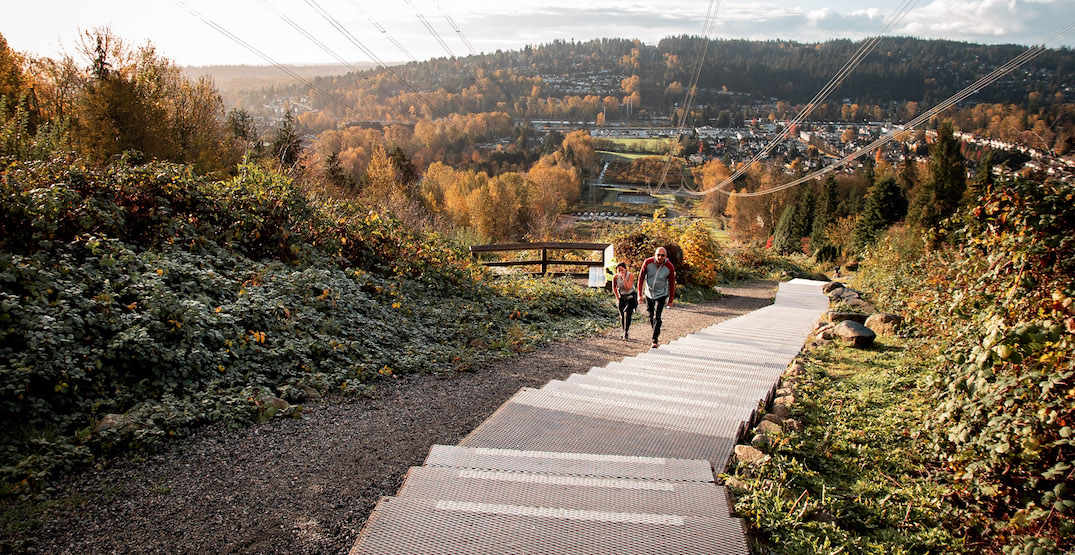 The City of Coquitlam is moving forward with the southward extension of the Coquitlam Crunch as part of the years-long, multi-phase project of upgrading the popular trail.

This work, considered the third phase of the project, would extend the trail along the BC Hydro right-of-way from south of Dewdney Trunk Road to just northeast of the intersection of Como Lake Avenue and Mariner Way.

Extending the Coquitlam Crunch southwards along this segment would grow the length of the existing trail by about 50%. The new southernmost trailhead would take advantage of its close proximity to Charles Best Secondary School, allowing the public to use the school’s vehicle parking lot and access washrooms at Charles Best Field.

A secondary parking lot will provide 30 vehicle stalls away from residential streets on city parkland at the northern end of the phase three extension along Dewdney Trunk Road.

Amenities and features along the south extension could include stairs in steeper sections, and additional washroom facilities. 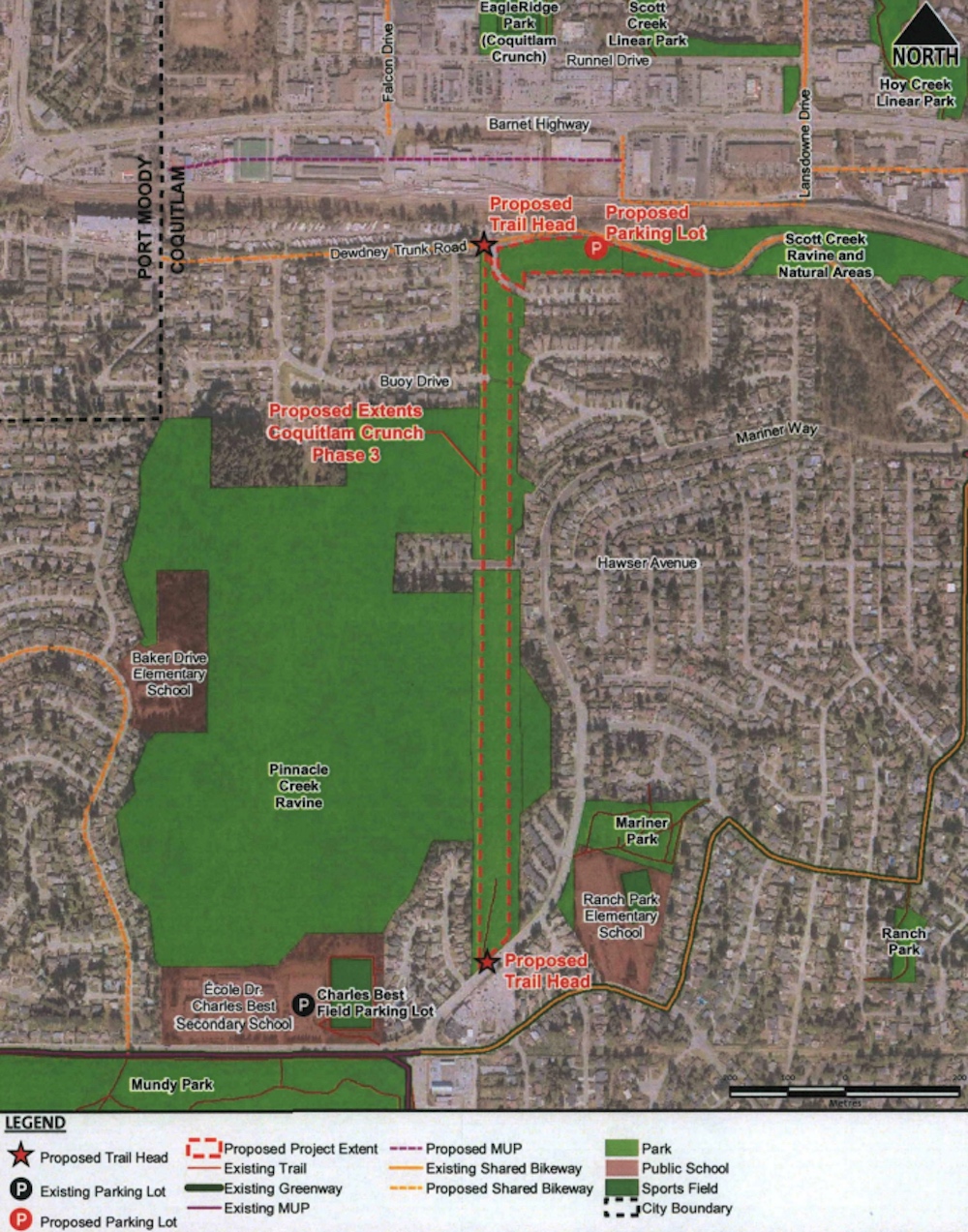 The southern (phase 3) segment of extending the Coquitlam Crunch trail. (City of Coquitlam) 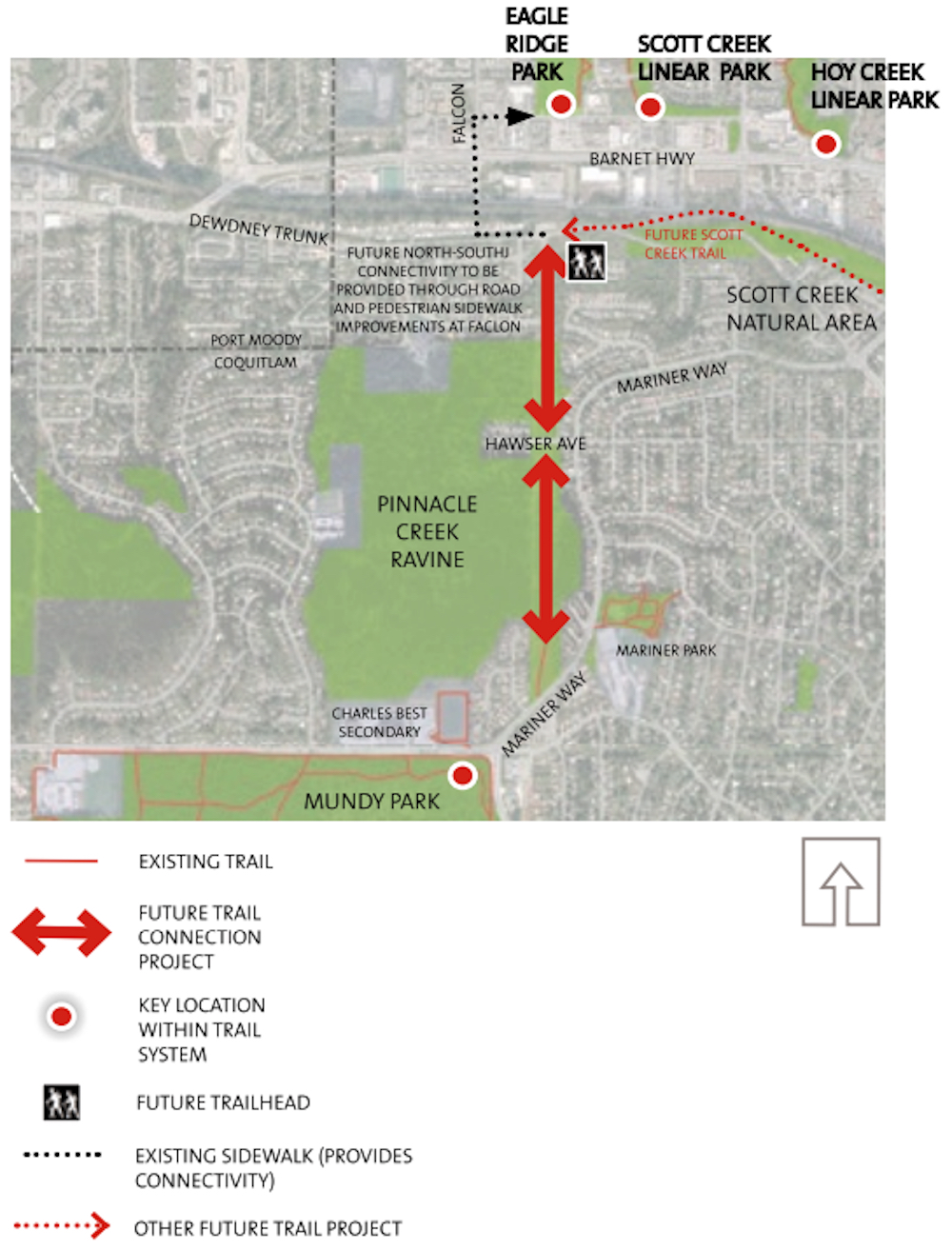 But this current project does not include establishing a new direct north-south pedestrian connection between the existing Coquitlam Crunch north of Barnet Highway and the planned southern extension south of Dewdney Trunk Road. The city expects this connection will eventually be made by building a pedestrian bridge over the railway and SkyTrain tracks from Dewdney Trunk Road to Falcon Drive, where improved pedestrian sidewalks would lead to the trailhead of the existing Coquitlam Crunch. It should also be noted that the city envisions an additional future SkyTrain station at Falcon Drive.

Public consultation will be held in early 2022 on the detailed design of the southern extension, and city council will provide final approval on the design and budget in April 2022. Construction is scheduled to begin in August 2022 for completion by December 2022. Currently, the third phase work is expected to cost $3.1 million.

The existing southernmost trailhead of the Coquitlam Crunch is located at Eagle Ridge Park’s parking lot next to Runnel Drive. The trail currently climbs up a distance of 2.2 km over a 242 metre elevation gain, following the BC Hydro right-of-way to the top of Westwood Plateau. It has two sets of stairs, with 894 steps. There are multiple access points along the length of the trail. 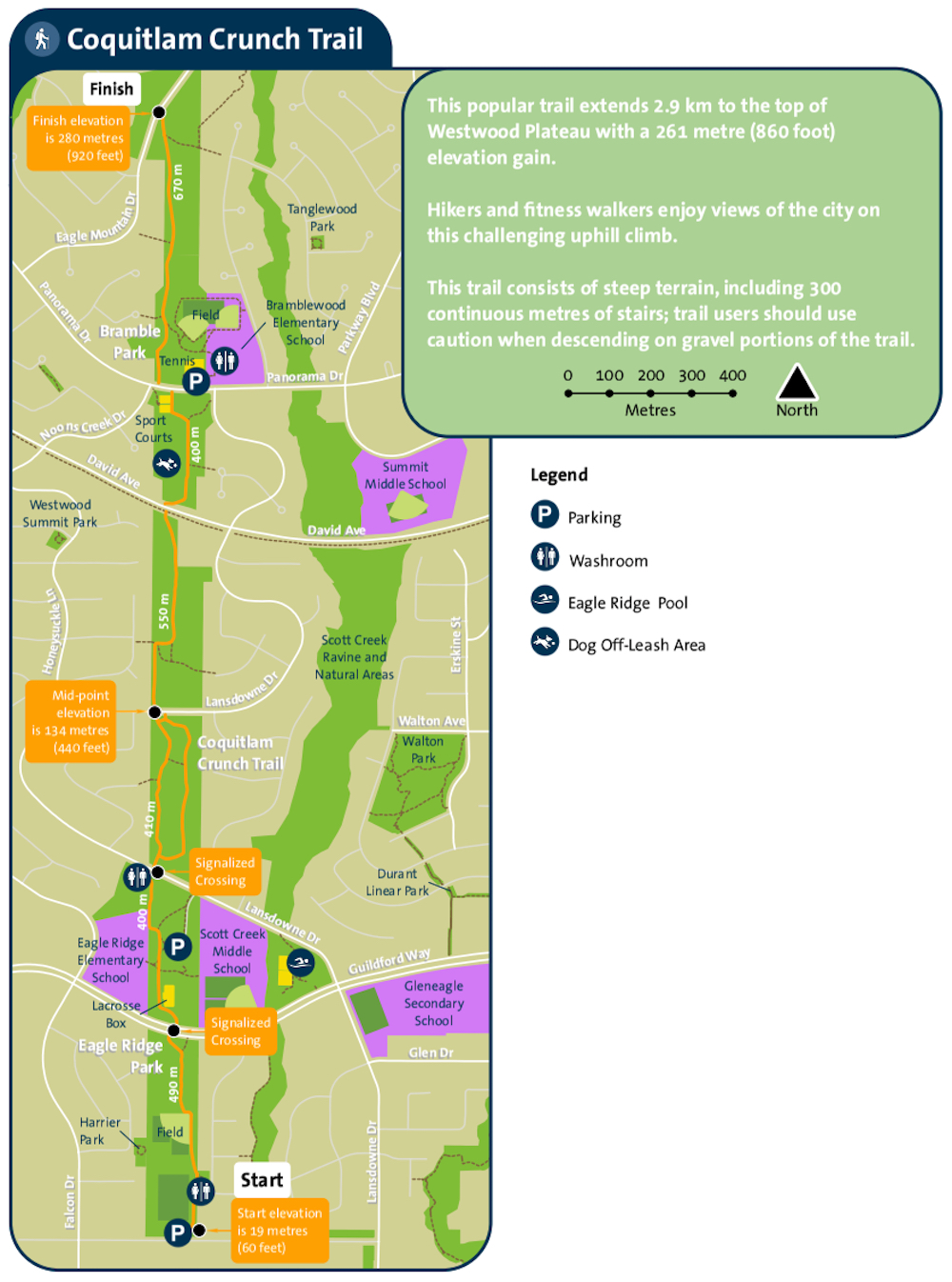 Trail map of the existing Coquitlam Crunch. (City of Coquitlam)

Second phase work involving improvements to the segment between Runnel Drive and Guildford Way include viewing decks and exercise equipment along the existing trail, but this phase has been deferred to prioritize the third phase’s southern trail extension instead.

The final fourth phase would be a northern extension of the Coquitlam Crunch from the existing northernmost trailhead at Eagle Mountain Drive, where the elevation is 280 metres. Following the BC Hydro right-of-way, the trail would veer northeast and find a new northernmost trailhead between the Meridian Substation and the baseball fields of Eagle Mountain Park. There will be a multi-use pathway, a washroom, a new parking lot at Eagle Mountain Drive, and the paving of an access road.

The fourth phase will be partially funded by FortisBC’s $3-million community benefit contribution towards Coquitlam Crunch improvements as part of its gas pipeline work in the area.

The third phase’s southern extension and the fourth phase’s northern extension combined would roughly double the length of the existing Coquitlam Crunch.

Other overall upgrades for the existing trail include safer pedestrian street crossings and additional signage.

The municipal government states the Coquitlam Crunch sees over 52,000 users per month during the peak season, and visitation numbers saw significant increases during the pandemic.

The approved capital budget in 2018 for all four phases of work for the Coquitlam Crunch is $7 million.

According to Vancouver Trails, the existing Coquitlam Crunch with its steep grades is classified as a trail with “immediate” difficulty. Its average round-trip hiking time is 90 minutes. It is essentially a shorter, less intense version of the Grouse Grind, with exercise uses as its main purpose.

Hikers on the Grouse Grind are, of course, not permitted to descend on the trail, which necessitates hikers to either use other routes like the BCMC Trail to leave the mountain or use Grouse Mountain’s Skyride. A download ticket on the Skyride is now $20.00 — up from $5.00 about a decade ago, and $15.00 just before the pandemic.

Map of the Coquitlam Crunch trail extensions and upgrades. (City of Coquitlam)