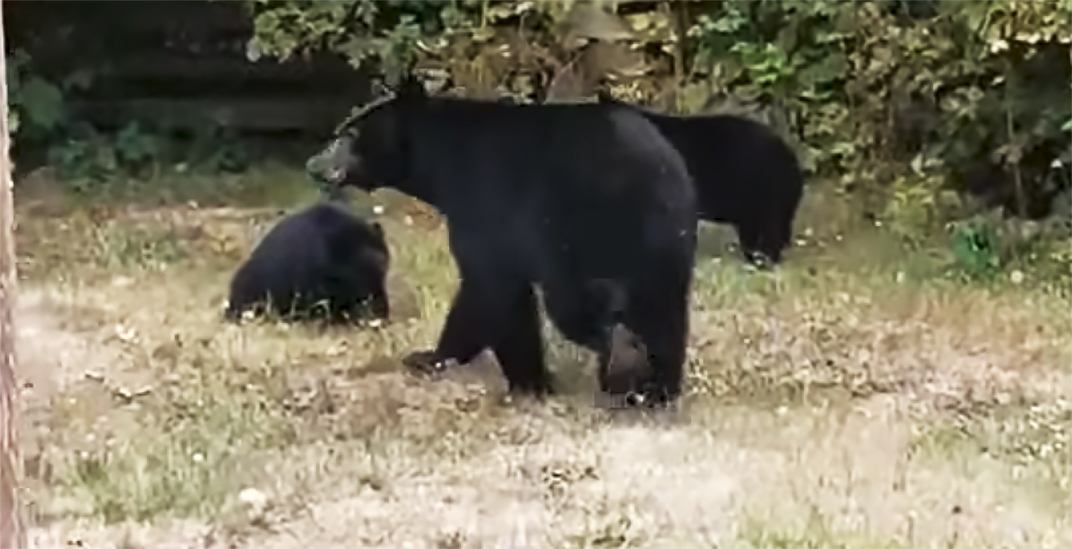 An animal advocacy group is calling for change after conservation officers killed a mother black bear and her two cubs earlier this week in Coquitlam — then having neighbourhood residents arrested for allegedly interfering with the call.

In a phone interview with Daily Hive Vancouver, the Fur-Bearers Executive Director Lesley Fox said it all started Tuesday afternoon when the COS was called to the area of Baker Drive and Sumpter Drive for three bears that “may or may not have been food-conditioned.”

“While in the pursuit of these animals, neighbours became concerned, particularly because they heard gunshots and that there were men that were armoured with guns on their front lawns, which was really alarming for them — children were present,” Fox said.

Fox said out of concern for the animals and the neighbourhood, residents made their opposition known to the conservation officers — the officers then contacted the Coquitlam RCMP for backup and to have three residents arrested for obstruction of a peace officer, adding that the COS also seized two residents’ phones after they filmed the situation unfolding.

There are a few points of concern in this story, Fox said, including what lead up to the killing of the family of bears.

“It’s reported that the mother and the cubs were running away from the scene, which to me suggests that the threat was not imminent,” adding it’s clear that if a large carnivore is showing signs of aggression or anger that immediate action is required, “but I think in this situation, when animals are running away, I think we can clearly say that they’re not a threat — and in fact they’re probably scared.”

“Residents in this community were obviously uncomfortable and opposed to the BC conservation officers killing this mother bear and her cubs, in this situation, I wonder why the BC Conservation Officer Service didn’t take steps to deescalate the situation and to deescalate some of the concerns that the residents were raising — especially when there’s firearms involved,” Fox said.

“They were out for a hunt”

Tony Faccin was one of the residents arrested on Tuesday, he told Daily Hive, “My kids were outside and all of a sudden I hear somebody yelling ‘bear! bear!'” then next thing he saw on his front porch, “is four people with shotguns running around like madmen and arguing with Susan across the street and she’s telling them ‘get off my property, you’re not welcome here, I don’t want you here, don’t shoot those bears, they’re babies,'” and that the conservation officer yelled at her to get into the house, threatening arrest.

“I was like ‘you know what I’m gonna video this just in case something crazy happens, like [if] they accidentally shoot someone,'” Faccin said.

Faccin said that even with his kids in the front yard and the conservation officers running with the guns, “the bear still wasn’t acting aggressive towards them, it was scared, it just wanted to get away from them and do its thing, it ran towards its home in the ravine — and they shot and killed all three of them.”

“There was no tranquillizer guns that I saw, all I saw was shotguns, they were out for a hunt,” Faccin said.

He said “it’s really dangerous I think to have people running around with shotguns in a residential neighbourhood with children everywhere, they don’t come up and warn anyone at first,” saying conservation officers, “were the threat, not the bears and they were firing into the ravine — like, I walk through that ravine.”

“They released me on the scene, I have two charges,” Faccin said, adding those charges are from under the COS’ Wildlife Act — and he still has a lot of questions surrounding how his cell phone was taken, as he’s still without it.

“All [the bears] were doing was walking through the yards,” Faccin said, adding that a gas line being installed in the area has an area of Como Lake road blocked off and is limiting the bears’ way of crossing to get into Mundy Park, where the lake is, “that’s where they live, between there and the ravine, so because they can’t get across the road, they have to use yards.”

Faccin said that he’s lived in the area for three years and was never bothered by bears, including this mother bear and her cubs, “I’m no expert on bears but they were tiny, you know… they’re adorable.”

Faccin said people need to know “that if you’re leaving food and attractants outside — you’re the cause of the bears being killed,” adding “lock up your bins properly,” and “there has to be more people going around and fining people for leaving their stuff out you know, for the bears to get.”

“They need to be more heavy-handed with the fines, they really do,” he said.

Fox said the Fur-Bearers are encouraging British Columbians to “use their voice” to create change, “people need to contact their MLA” if they have concerns about wildlife.

She said, “we can also talk to city council and we urge residents to contact their council to voice concern for garbage and waste management, asking for more enforcement, bylaws, more tickets to be written.”

Fox said this story is echoing concerns raised before by the Fur-Bearers, “we’ve asked for greater direction about who’s responsible for fines and laws regarding attractants, we’ve asked for non-lethal methods to be exhausted, and these requests are falling on deaf ears.”

“The BC Conservation Officer Service is taxpayer-funded, they are a policing agency under the Ministry of Environment for the BC Government and they should have strict rules to follow, there should be independent oversight and there should be more transparency, and I think that’s something as citizens and as animal lovers, we can demand from our local politicians,” Fox said. 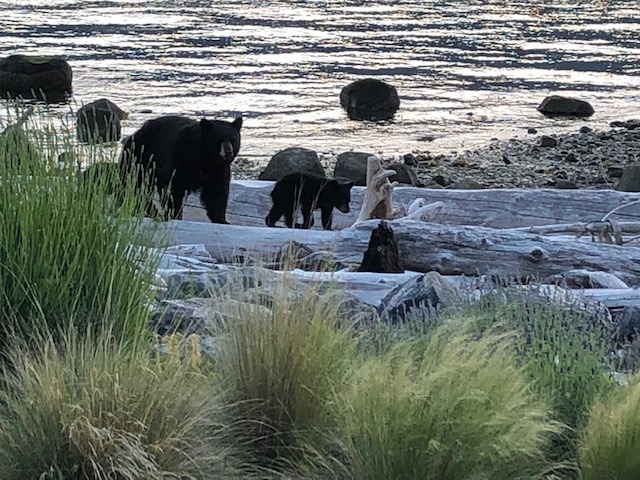 “Conservation officers never, ever got into this job to destroy wildlife”

BC COS Inspector Murray Smith said for the past six weeks, the ministry had received multiple reports about a sow black bear and her two cubs in the area. “Conservation Officer Service initially tried multiple times to capture the bears before they became human habituated, which is loss of fear of people or food-conditioned to non-natural food sources.”

The bears continued to get into garbage had multiple encounters with the public.

Smith said that’s when two men and a woman began to “interfere with the officers” verbally and by being physically present in the situation, ignoring “requests from conservation officers to back away from the situation and allow the officers to complete a difficult objective involving dynamic conditions,” As a result, they were arrested.

He said the phones were seized because officers believe there’s evidence related to the arrests — no word on when they will be returned, “we have the right to seize any evidence under the Wildlife Act, and under the Criminal Code of Canada.”

“It is noted that conservation officers have a very difficult job to do associated to protecting public safety relating to dangerous wildlife. Having the public interfere with this difficult job only exasperates this difficult situation,” Smith said, adding that officer safety is also threatened.

Smith said “I think it’s really important that everybody understand that conservation officers never ever got into this job to destroy wildlife. We only got into this job to protect it. But public safety is the first mandate of the Conservation Officer Service, and in this case, the bears were given every chance and, and it was continually a situation with unsecured garbage.

“The conservation officers didn’t put the garbage out. It was members of the public and, this is Coquitlam, which is a bear smart community.”

“The municipality of Coquitlam does an excellent job of ensuring that attractants are managed and people are held accountable if they’re not following the laws and the bylaws,” Smith said. “It’s the public that has to be held accountable, and it has to make some changes so that conservation officers won’t be put in this position.”

Regarding the concerns surrounding the construction on Como Lake road, Smith said he’s seen similar issues before, “as we get more and more into bear habitat and coexisting with wildlife and so on, I suspect that there isn’t a connection between the pipeline.”

Smith said in Coquitlam so far this year, there have been 1,000 bear reports — eight bears were destroyed and three relocated, suggesting those numbers are on par compared to last year’s.

Smith said that the municipality will be following up on the situation, adding it can issue a ticket for $500, and issues many of those tickets already.

Coquitlam RCMP Spokesperson Cpl. Michael McLaughlin told Daily Hive that RCMP can’t comment further on the situation as it’s the COS’s file, however, can confirm that officers were there and arrests were made.