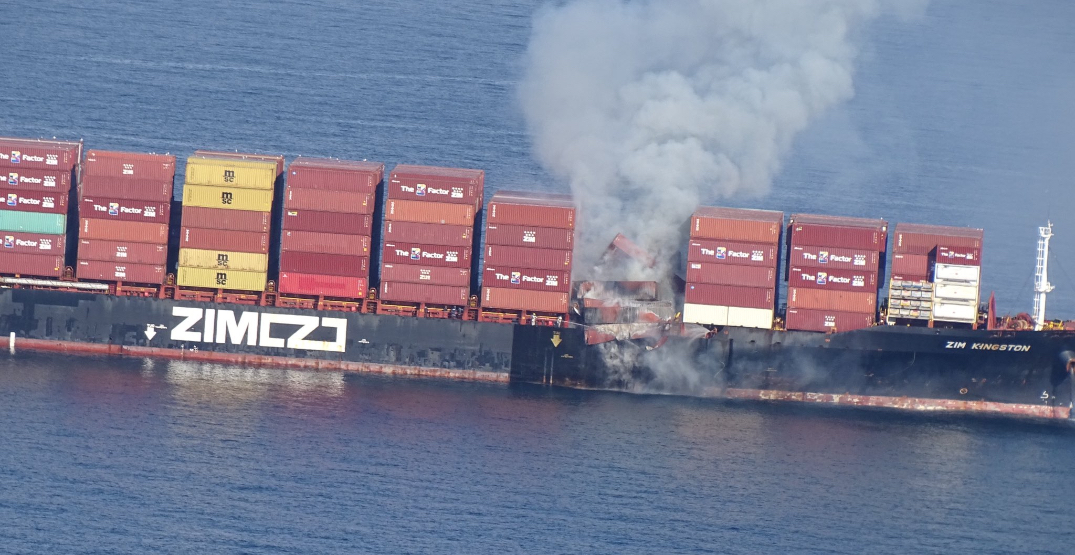 A container ship anchored near Victoria experienced a fire on board and containers burned all night while crews worked to fight the fire.

The vessel M/V Zim Kingston reported a fire in damaged containers onboard at 11 am on Saturday, October 23. In the evening the Incident Command Post handling the situation issued an update.

According to the update, the Coast Guard was tasked with assessing the physical condition of the ship and found that 10 containers were on fire and the fire was continuing to spread – although the ship itself was not on fire.

“To protect the health and safety of the ship’s crew, as well as responders, CCGS Cape Calvert and CCGS Cape Naden have now evacuated 16 members of the crew and transported them to Ogden Point. Five crew members remain on board the M/V Zim Kingston to fight the fire,” reads the update.

Onboard the ship, two of the containers on fire have 52,080 kgs of UN#3342, class 4.2 of Xanthates Potassium Amylxanthate, a reactive and toxic organosulfur compound used in the mining industry.

The fire is happening in the aftermath of the vessel, which was en route from South Korea to Vancouver, losing 40 containers at sea and launching both Canadian and American coast guards into action.

The Canadian Coast Guard tweeted out additional information on the unfolding situation on Sunday, October 24, sharing that overnight crews sprayed the hull of the vessel with cold water to cool it down because the chemicals onboard mean that “applying water directly to the fire is not an option.”

The #EmergencyZone around the ship has been increased to 2 NM. The Atlantic Raven has replaced the CCGS Captain Goddard M.S.M. and CCGS Cape Calvert is also monitoring. pic.twitter.com/9DAsgvMXWr

#CCGLive: Active fire fighting is underway at the M/V #ZimKingston and we are seeing a reduction in fire and smoke. Gale force winds are predicted for the area. Teams will be monitoring air quality both on the water and on shore.

As for the missing containers, they are currently about 12 nautical miles off the coast of Vancouver Island near Bamfield. Unified Command said in their statement that the recovery of the containers may be challenging given that BC is about to experience potentially historic storms.