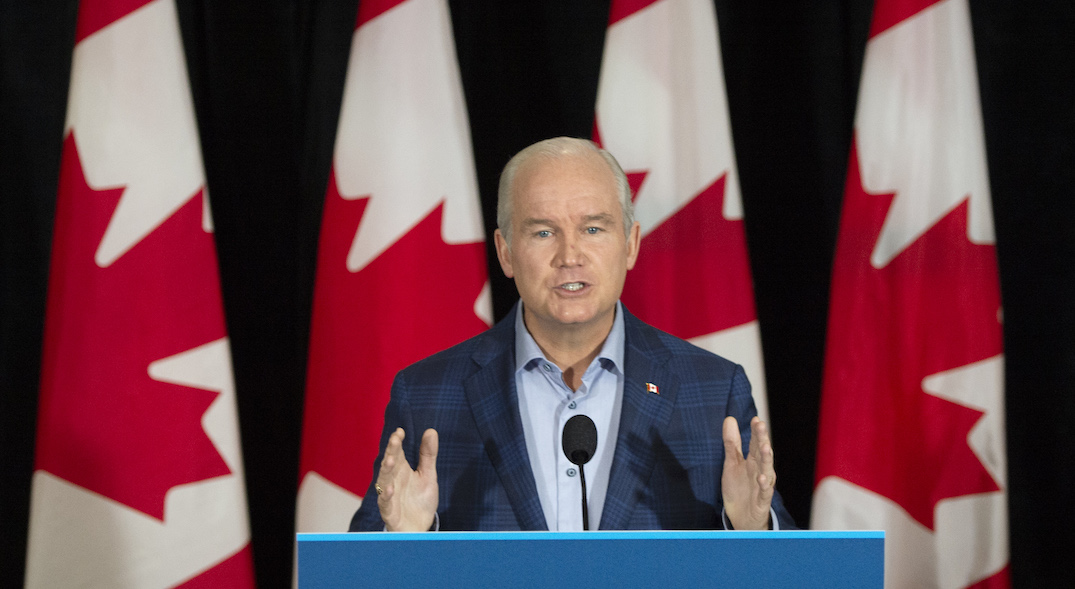 It comes as Canada prepares to attend the United Nations Climate Change conference this fall, where countries are expected to commit more ways to tackle the issue.

In anticipation of the meeting, the Liberal government recently increased its targets for reducing greenhouse gas emissions to between 40% and 45% below 2005 levels by 2030, up from 30%.

The 30% goal was set by former Conservative Prime Minister Stephen Harper and was the commitment the country was held to under the 2015 Paris Agreement.

O’Toole says the Conservatives’ climate change plan “will meet the Paris objectives” of 30%, despite the United Nations specifying the agreement works by countries coming up with “increasingly ambitious climate action” every five years.

“In the 10 days after I launched our plan in April, [Trudeau] changed his targets three times with no plan,” O’Toole said at a campaign stop in Corner Brook, NL.

The Conservative leader touted his plan, which proposes charging a carbon price on fuel and putting more electric vehicles on the road, as one that strikes a balance between combating climate change and protecting jobs and economic growth.

“If people want to get the country working again, there’s only one option in this election: the Conservative party,” said O’Toole.

But Michael Bernstein, executive director of Clean Prosperity, which advocated for the party to adopt carbon pricing, said O’Toole’s planned cut of 30% “would be a step backwards” compared to the commitments made by other G7 allies.

“If O’Toole sticks to the 30% target he will be forced to revise the climate target that the current federal government has already submitted to the UN as part of the Paris treaty,” he wrote in a statement to The Canadian Press.

“This would be a violation of the Paris treaty and, while there’d be no legal impact, it would send the wrong signal to the rest of the world, including potential investors, about our commitment to climate action.”

Caroline Brouillette, a policy manager at Climate Action Network Canada, said in a statement that weakening Canada’s target submitted to the UN “would not only be a diplomatic disaster, but a failure to recognize that Canada should do its fair share of the global effort to limit global warming to 1.5C.”

“Raising ambition is at the heart of the Paris Agreement. Levelling down would violate its spirit,” she said.

Trudeau announced a higher emissions-reduction target for Canada earlier this year while attending a virtual climate summit convened by US President Joe Biden, who pledged to slash his country’s greenhouse gas pollution levels by 50 to 52%.

The Liberal government recently inked the new goal into legislation committing Canada to hit net-zero emissions by 2050. Parliament passed the bill before its summer break despite the Conservatives voting against it.

The government, however, has yet to detail how it plans to meet its strengthened goals.

O’Toole entered the 13th day of the campaign by making a swing along the East Coast, stopping first in western Newfoundland, where the party hopes to win its first seat on the island in years.

The last time Newfoundland and Labrador was home to a Conservative MP was in Harper’s final term.

During an announcement in Corner Brook, where O’Toole promised to increase EI benefits for sick workers, he sidestepped questions about whether he would uphold a $5.2 million deal Ottawa struck with the province ahead of the election call over the long-troubled Muskrat Falls hydroelectric project.

The leader later clarified that he would.

“A Conservative government under my leadership will honour the deal in place with the provincial government of Newfoundland and Labrador for the Muskrat Falls hydroelectric project,” O’Toole said in a statement afterwards.

“We will also create jobs and boost the economy in Newfoundland and Labrador by supporting the offshore industry – a sharp contrast with the other parties who have been clear they want to shut that industry down.”