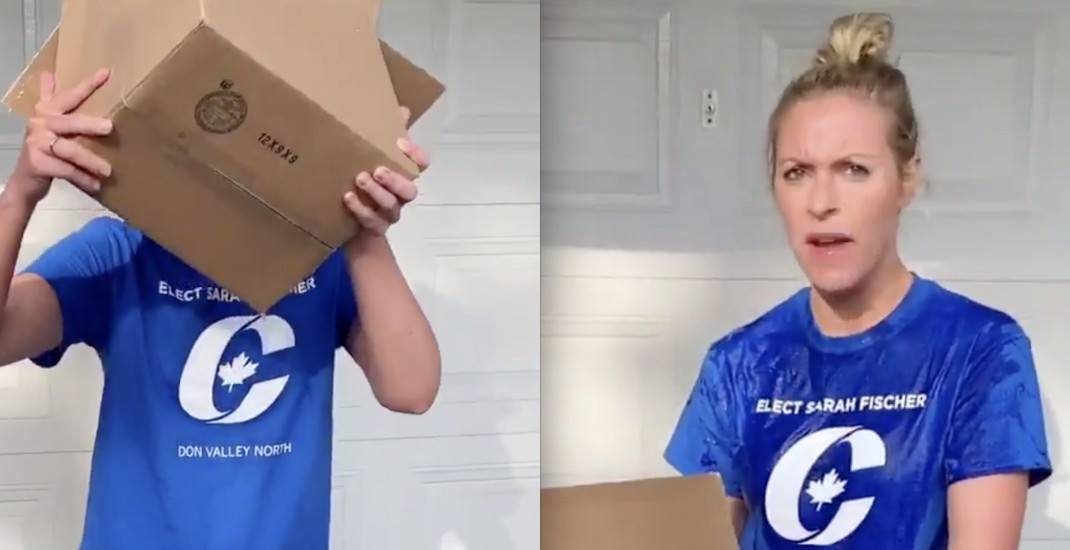 A federal Conservative Party candidate attempting to poke fun at Justin Trudeau’s comment about using “drink box water bottles” has had a difficult time getting her joke to land on social media.

On Monday, Trudeau got a bit tongue-tied when asked how his family cuts out on plastic waste while announcing his government’s plans to ban single-use plastics.

The Prime Minister told reporters that his family has “recently switched to drinking water bottles out of…water out of when we have uh bottles out of uh plastic, sorry, away from plastic towards uh paper — like drink box water bottles sort of things.”

On Wednesday, Sarah Fischer, the Conservative candidate in the Toronto electoral district of Don Valley North, decided to post a video making fun of drinking out of “box water bottles.”

The video shows Fischer attempting to drink water out of a cardboard box. “No, doesn’t work,” she says looking into the camera as she gets soaked with water.

But many were quick to point to Fischer out that in this day and age water is sold in drink boxes.

This is real and used to be boxed and sold in Calgary. pic.twitter.com/bozbBBtC8U

This is so embarrassing, girl.

So….. https://t.co/76QfiEo43f I don’t support one party in particular. But do a quick google search first….

Seriously, so these juice boxes are a figment of my imagination, the stupidity is astounding???

My local grocery store sells water in tetra-pack boxes (the same type of boxes juice is often sold in). It’s a real thing.

Try this water – @FlowHydration – it is water in a “box”. Good Canadian company!

Here is your boxed water. This is sort of an actual product sold by like um an actual um Canadian company with like said environmental concerns in mind. https://t.co/AOo1LxAd2A pic.twitter.com/y0ClOeklkc

Have you been to a store in the last 5 years? pic.twitter.com/gfPQh0AnQq

At least we all now know that boxed water is a real thing.