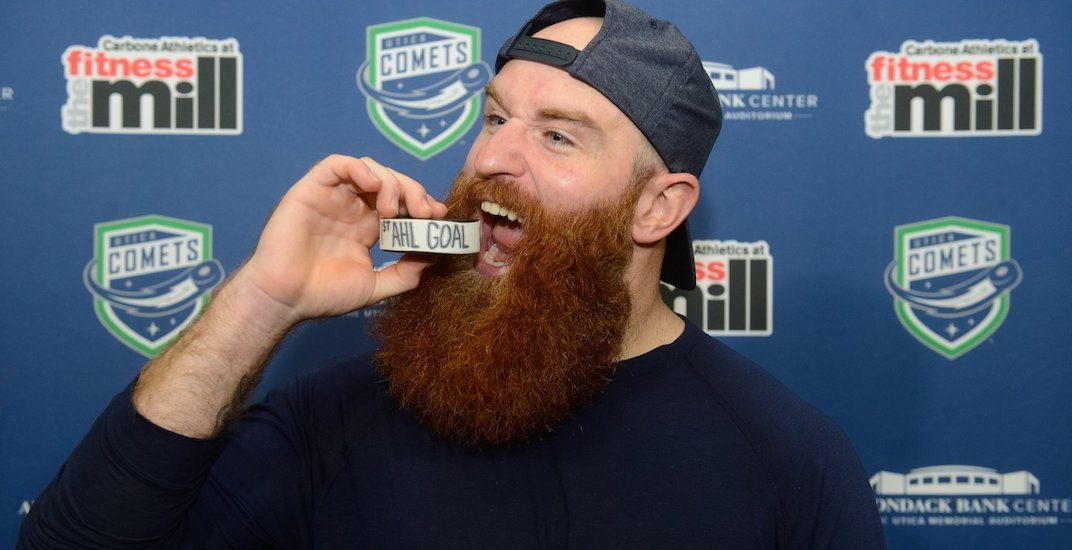 Fans were infatuated with Colton Saucerman before they knew anything about him.

With a name like that, how could they not?

Then they saw his wicked beard and it was love at first sight.

After signing a pro tryout contract with the Vancouver Canucks’ farm team this week after the Utica Comets suffered injuries to four defencemen, the 26-year-old journeyman blueliner became an internet sensation. For good reason too, he dressed up as Gritty for Halloween!

Then he stepped onto the ice.

Standing at just 5-foot-9 in his fourth year of pro hockey spent primarily in the ECHL, not much was expected of him. Saucerman failed to score a goal in each of his first 17 AHL games, but wouldn’t you know it, he scored in his Comets debut and was named the game’s third star in a 5-2 win on home ice.

As the puck went into the net and Utica’s play-by-play announcer proclaimed “get sauced Utica,” a legend was born.

I mean, look at these post-game photos:

The Comets are taking full advantage of this quick rise to fame by selling limited edition “Get Sauced Utica” t-shirts.

Limited edition ‘Get Sauced Utica’ t-shirts will be available in the Team Store during tomorrow’s game. All proceeds will go to the @SODFoundation who will make a donation to pediatric cancer at the request of @Sauce_2392. pic.twitter.com/E4wwYFif0j

The t-shirts will be available in the Comets Team Store during their next game on Friday, with all proceeds going to the Save of the Day Foundation who will make a donation to pediatric cancer at the request of Saucerman.

“The attention is nice, but I’m here to play hockey,” Saucerman said after the game. “I definitely enjoy it. Reading some of the comments last night was just hilarious.”

“The guy seems to have a following here,” said head coach Trent Cull. “He’s a well liked guy wherever he goes. I’ve talked to some other coaches.

“It’s nice to have a little buzz around us.”