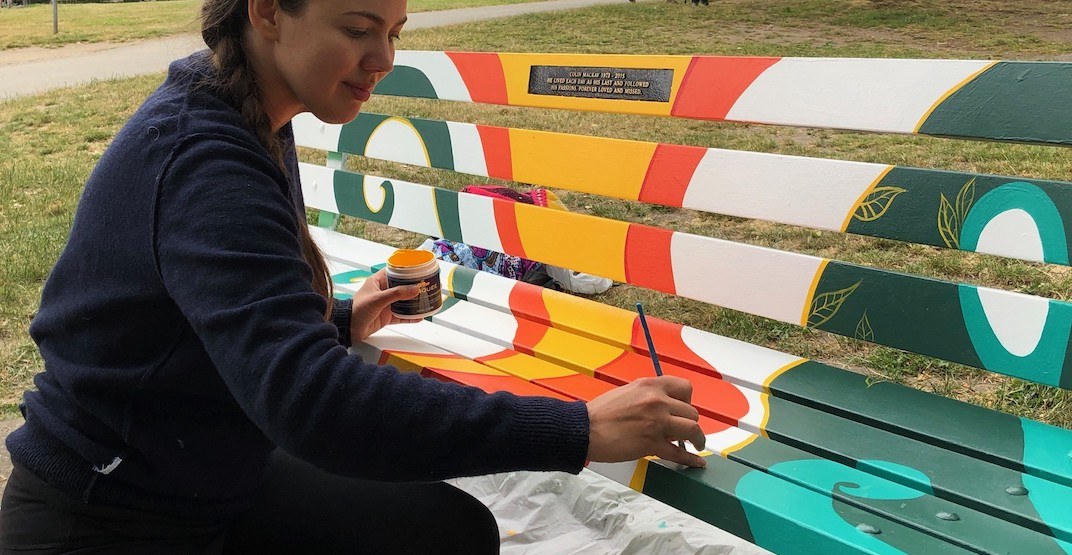 It’s been nearly four years since Julia Goudkova lost the person she calls her soul mate, Colin Mackay, in a motorcycle accident on July 2, 2015 — the day her “world shattered.”

To honour her late partner of nine years, the local artist decided to paint the memorial bench that she and Mackay’s family chose to celebrate his memory with at Kitsilano Point (near the north end of Kitsilano Beach) — but was surprised to be notified by the Vancouver Park Board (VPB) that it’ll be removing the painted memorial bench and replacing it with a new one.

Goudkova has since launched an online petition, calling for the Park Board to reconsider its decision, and change its policies.

In a phone interview with Daily Hive, Goudkova said the reason for the removal is because the park board explained it does not allow painting of memorial benches — considering it vandalism.

Goudkova said that she and Mackay’s family paid a total of around $5,000 for the memorial bench located at Ogden and Maple in Kitsilano: “My understanding was that we leased the bench whereas you actually only lease the space for the plaque,” and that the board has the rights to the bench.

“I was a little surprised because they don’t really maintain the benches, they’re all, you know, dirty and washed out and they basically kind of just let them rot for ten years until the new one comes in, so I honestly just thought I was doing a good deed, and not just for myself and Colin’s family, the whole community at large to be able to create something that can be enjoyed by many,” said Goudkova.

“In a way it almost felt like bringing Colin back to life, like you know, the bench it was so… the energy of it was so stagnant and dead,” she said, calling it a “labour of love” because “I was on my hands and knees for days scrubbing, washing, priming, painting and I think the physicality of it really allowed me to be able to channel those feelings that I have towards Colin.”

“I didn’t mind the back pain, I didn’t mind the sore knees… it all became a part of the process for something greater than me, and it’s something that I know that Colin would have absolutely of loved so it truly feels like a gift to him and our community,” said Goudkova. 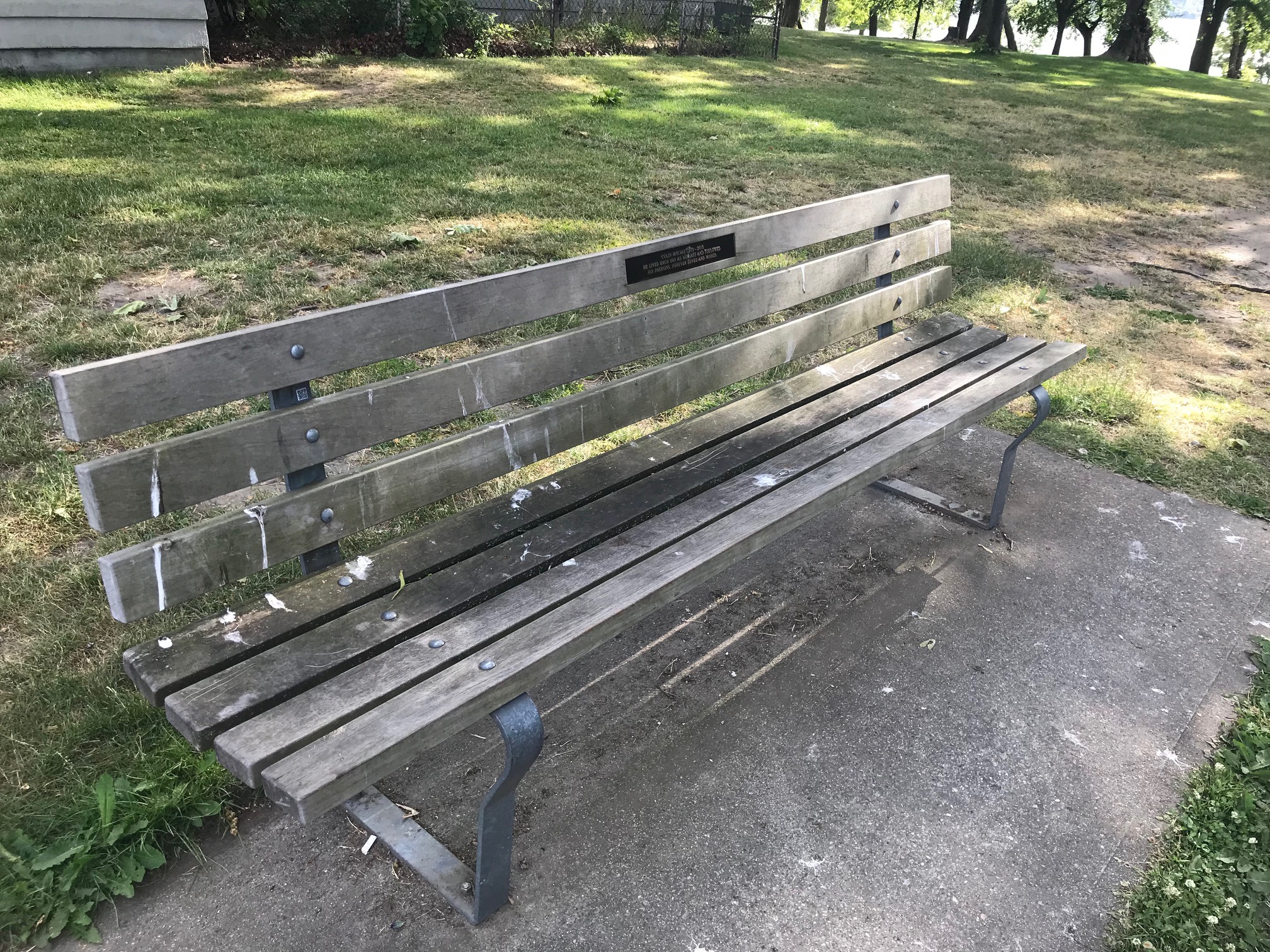 Now with Goudkova planning a ceremony for Mackay on Tuesday, she said she did not want people to see the state of the memorial bench that it was in: “It was just looking so dead and drab that I didn’t want that to be the focal point of the gathering, I want to remember the light and the colour and the vibrancy that Colin was and not the dead, grey, decaying bench,” adding that the colours she used in the painting “have a lot of significance to us and our story together.”

Goudkova said she wants people to learn more about the people on the memorial benches and their stories, like Mackay’s, describing him as a “son, brother, uncle, friend, teacher, anti-bullying activist, writer, poet, actor, bartender, and world-adventurer.”

“It’s been so touching and humbling to connect with hundreds upon hundreds of strangers who would stop by and express their appreciation for the art and inquire about the story of the man on the plaque and in turn, it opened up the doors for people to share their own stories of loss, of love, of creativity, and inspiration and in ways I almost felt adopted by the community,” Goudkova said of the time she spent painting the memorial bench.

She said people would leave her notes in the evening when she was gone, encouraging her to continue to paint and others stating they wished other benches would be painted to honour past lives.

“I just really hope that this bench is an invitation for people to see the potential of light and beauty that can come from a place of big darkness and grievance and despair,” Goudkova said. 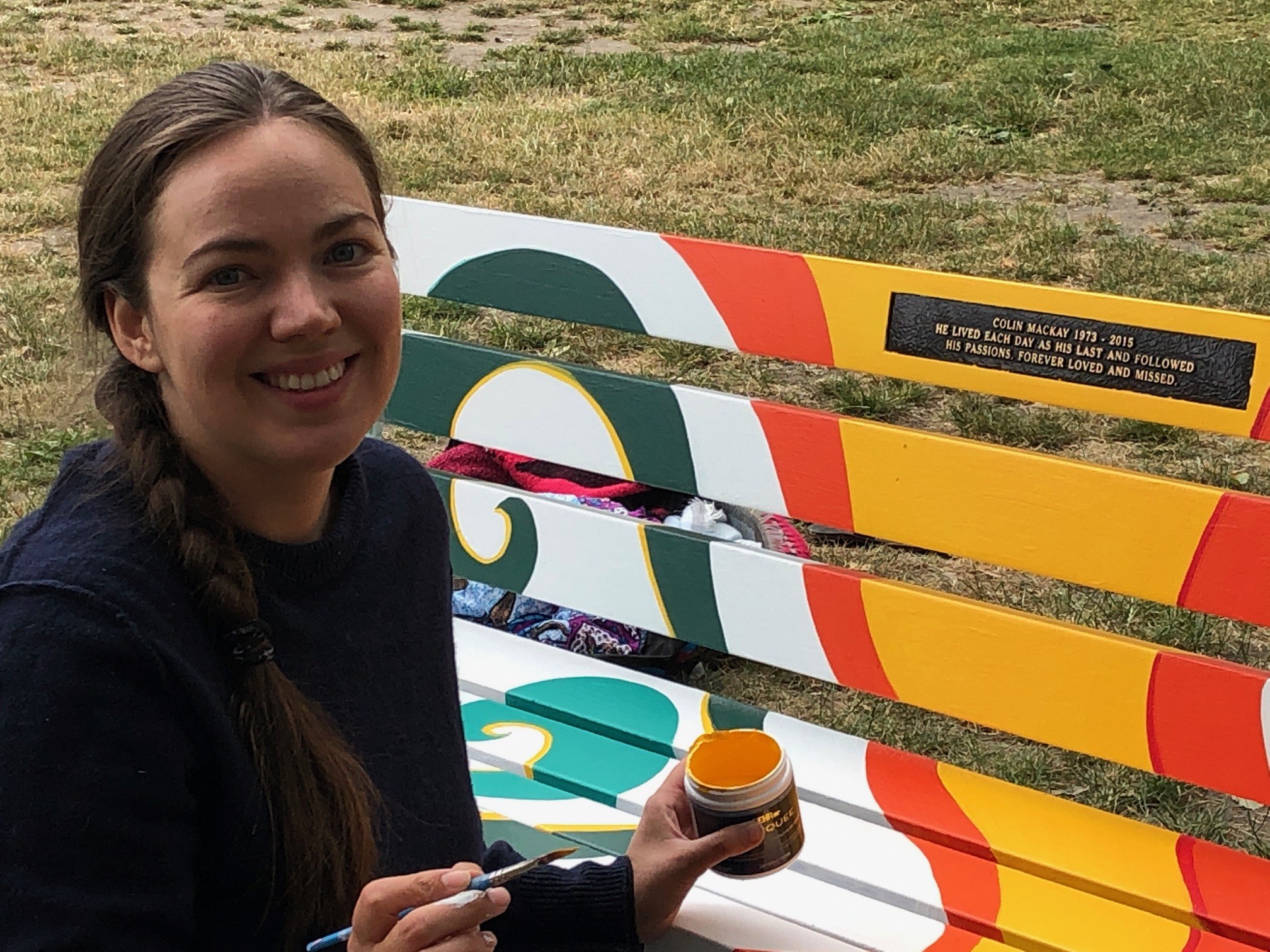 VPB spokesperson Daria Wojnarski said in an email that the board is allowing the painted memorial bench to stay in place until July 2, “so the family of Colin Mackay, in whose memory the bench is dedicated, can celebrate his life at the bench. We will remove the bench after July 2 because the painting of memorial park benches is not allowed and in keeping with overall park design. The bench will be replaced with a new one as soon as possible.”

“The city works for the people and if people collectively are in favour of something… it just makes absolutely no sense why the city would waste resources on the removal and not listen to the desires of its citizens,” said Goudkova.

Goudkova has hopes that the online petition will gain momentum between now and the ceremony, and will get enough signatures from people speaking up in favour of painting memorial benches, to keep Mackay’s bench there now — and inspire a new program where artists can work with families of lost ones through the city in honouring more lives.

“How awesome would it be to have the bench represent the essence of the person who had passed, because to me, when I look at this bench, and when Colin’s mom looks at this bench, we see Colin,” Goudkova said, adding his father Cam told her in a message that it “reflects my son’s desire for life and brings this monument alive.”

Goudkova said the ceremony is being held at 7 pm on July 2 at Mackay’s memorial bench, and because of the support she’s received, she’s extending the invitation to anyone who would like to attend.