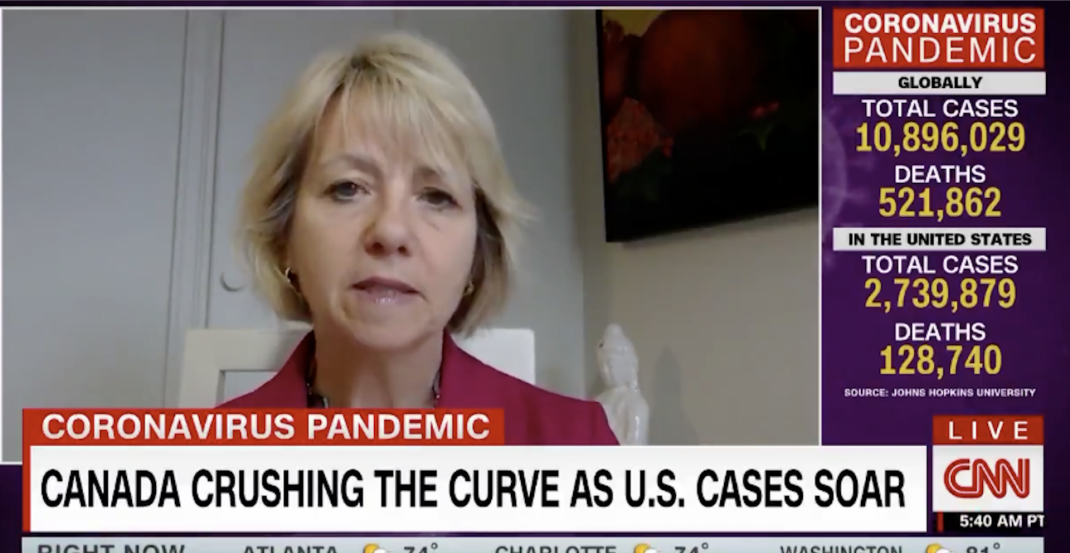 BC’s Provincial Health Officer Dr. Bonnie Henry is receiving more international exposure, this time in the form of a television report from CNN.

The segment, entitled, Canada Crushing the Curve as US Cases Soar, compares the response and current rate of COVID-19 spread in both countries, as well as what government and health officials have done in response.

The segment was tweeted by BC Premier John Horgan who said the province’s “progress during the pandemic comes from all British Columbians doing their part to keep each other safe and healthy.

Check out the video segment below:

Our progress during the pandemic comes from all British Columbians doing their part to keep each other safe and healthy.

Here’s Dr. Bonnie Henry featured in a @CNN story on the Canadian response to COVID-19.👇pic.twitter.com/ZPJxoyWpih

This isn’t the first praise for Henry from south of the border, either.

Back in early June, The New York Times published a profile piece on her this week, entitled The Top Doctor Who Aced the Coronavirus Test.

The article stated that Henry “kept the disease in check in British Columbia without harsh enforcement methods,” and that “now, she is leading the way out of lockdown.”

In a joint statement on Friday, Henry and Health Minister Adrian Dix announced 13 new coronavirus cases in the past day, but said no one else has died from the virus.

The latest cases bring the number of active cases in the province to 162.

Overall, BC has recorded 2,947 cases since the pandemic began. Health Minister Adrian Dix noted six cases have been removed from BC’s total because they turned out to be residents of another province. Those people will be added to their home province’s total case count.

There are currently 19 people in hospital with coronavirus infections, and two of them are in intensive care.

BC’s coronavirus death toll remains at 177 and 2,608 people who tested positive have recovered.