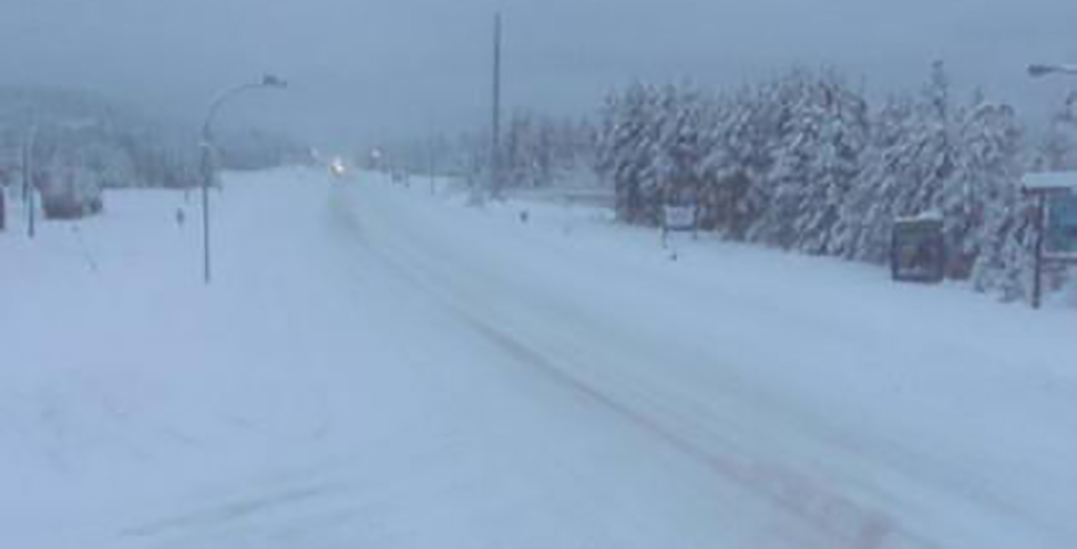 A strong Pacific frontal system that arrived in British Columbia on Thursday continues to batter the province’s southern interior with a winter storm.

According to Environment Canada, hazardous winter conditions are expected on parts of interior highways with snowfall amounts of up to 60 cm expected by Saturday afternoon.

Most recently, Drive BC has issued a number of closures and travel advisories due to the difficult travel conditions and a number of vehicle incidents. At this point in time, separate closures are preventing travel through all three of BC’s highways to and from the interior.

Highway 5 (the Coquihalla) northbound has been closed due to a vehicle incident between Hope and Merritt. Drive BC says that an estimated time for this section of the highway to reopen is unavailable, although an update is expected later this morning.

A travel advisory is in effect for the Coquihalla between Hope and Merritt due to “extreme blowing snow.” Drive BC’s advisory reads that “70 to 80 cm of additional snow” is expected and that “travel is not recommended unless absolutely necessary.”

Travel on Highway 3 has been affected due to a number of vehicle incidents. An accident has caused for single lane alternating traffic between Nelson and Belfour.

#BCHwy3A – Vehicle incident has the highway down to single lane alternating traffic at Kokanee Glacier road between #NelsonBC and #BelfourBC.
Crews are on scene. Expect some delays. Next update : 9:00 AM
More info: https://t.co/bFgHO2vQAQ

Highway 3 has also been closed in both directions due to an accident between Allison Pass Summit and Manning Park Resort. Drive BC has not yet provided an estimated time of reopening, although an update is expected before noon.

Most recently, a rockslide closed has closed a portion of Highway 1 — the third major route to and from BC’s Interior. DriveBC tweeted just after 9 am that there was a rockslide north of China Bar Tunnel affecting about seven kilometres of the road.

Crews are still assessing the situation and there is no estimated time of reopening.

Anyone travelling through the southern interior or using the affected routes is asked to take heavy caution while driving, and even postpone non-essential travel.

Snowfall is expected to carry over through Saturday, although conditions are expected to improve on Sunday.