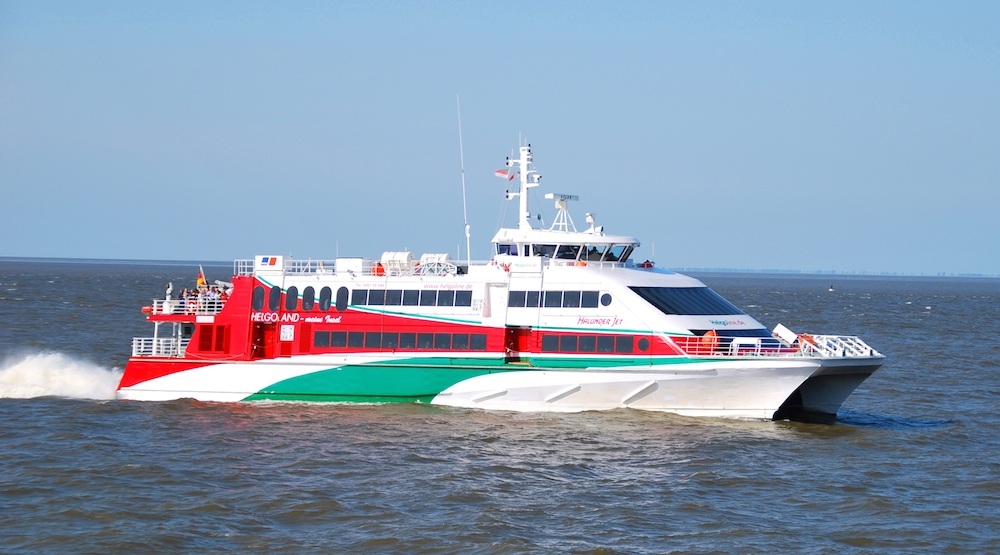 The Halunder Jet high-speed ferry will take passengers from Vancouver to Victoria from spring 2018. (Victoria Clipper)

A major competing service to the existing ferry routes that connect the Lower Mainland with British Columbia’s capital region will be launched in the spring of 2018.

The company that operates the existing Victoria Clipper to Seattle confirmed today it will launch a new high-speed passenger ferry service between downtown Vancouver and Victoria Inner Harbour in spring 2018.

Unlike another new planned service designed for tourists that was announced two weeks ago, the Clipper’s new route is targeted for a larger market that includes commuters, with more economical pricing.

The vessel was custom built in 2003 for FRS’ operations between Hamburg and Heligoland in Germany and has operated in rough sea conditions similar to the Strait of Georgia.

With seats for 570 passengers, the vessel’s capacity is significantly largely than other existing or future catamarans operating in the Pacific Northwest.

Clipper spokesperson Scott Meis told Daily Hive the newly acquired vessel will have a travelling speed of up to 36 knots (67 km/hr), although the final operating speed will be determined by Transport Canada.

Each one-way trip will be approximately three hours, making the trip about 30 minutes faster than the alternate and more expensive V2V Vacations service.

This is also slightly shorter than the travel times of BC Ferries’ Tsawwassen-Swartz Bay route when including road travel times between the terminals and city centres.

Prior to service, the Halunder Jet will be renovated to the specifications utilized by Clipper and reflagged for its new operation.

“Clipper has been committed to ensuring that we have the right vessel for this route,” said Clipper CEO Tobias Haack. “For more than 30 years we have safely and reliably operated ferry services around the Salish Sea, and we know that customer comfort is again paramount for our new Vancouver to Victoria route.”

“Halunder Jet is the perfect addition to the Clipper fleet and aligns with our high standards for customer service. We could not be more excited to launch this new operation with our longstanding tourism partners in Victoria, Vancouver and across the Pacific Northwest.”

V2V Vacations will dock at the CPR Steamship Terminal Building just outside the BC Legislature in Victoria and in Vancouver, at the Harbour Flight Centre at the Vancouver Convention Centre.

Meanwhile, the Clipper service will use its existing Belleville facility in Victoria – just one block west of the Steamship Terminal in the Inner Harbour. Clipper’s dock location in downtown Vancouver has not been made public.

A third high-speed passenger service from the mainland to the island, from downtown Vancouver to Nanaimo, could commence in the next two years.

Victoria-based Island Ferry Services was recently selected as the preferred operator of the new route, which would make one-way trips in just 68 minutes.

These three services are the latest efforts to launch a high-speed ferry service between Vancouver and Victoria, after a number of failed services over the past three decades.

However, there will be much more demand for such services this time, given that there has been significant regional population growth, densification in downtown Vancouver, growth in the workforce and tourism, and improved transit services like the SkyTrain Canada Line, within walking distance of potential downtown ferry terminals.

Interior of the catamaran ferry for the new service. (Victoria Clipper)