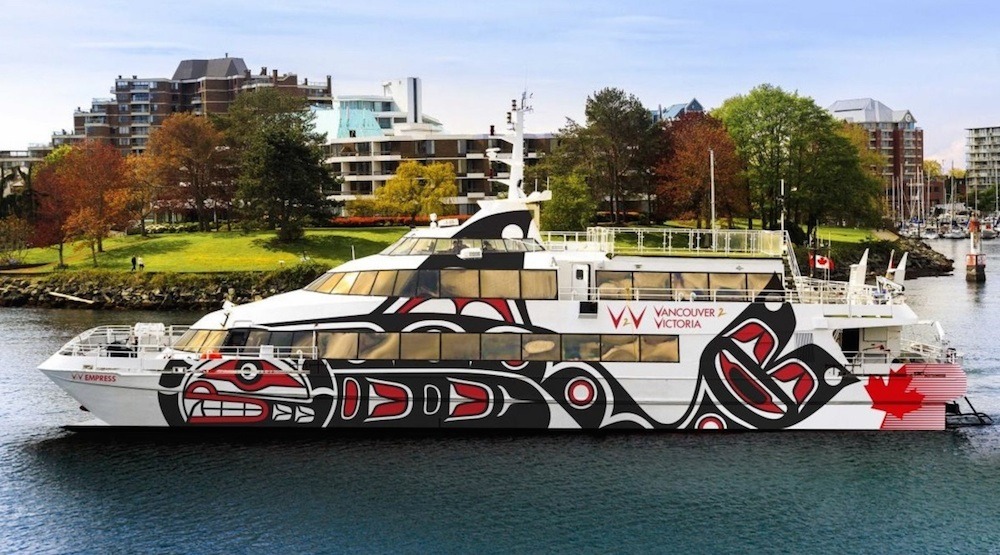 Artistic rendering of the high-speed catamaran ferry to be used for V2V Vacations' new service between downtown Vancouver and Victoria Inner Harbour. (Photo by: V2V Vacations)

The first of two new high-speed passenger ferry services from downtown Vancouver to Victoria Inner Harbour is scheduled to make its first sailing on May 1.

V2V Vacations, a division of Australian marine travel and services company Riverside Marine, says its daily, round-trip service between the two cities across the Strait of Georgia is a luxurious experience designed for the tourist market.

Passengers will board a 254-seat passenger high-speed jet catamaran from Vancouver Harbour Flight Centre at the Vancouver Convention Centre’s West Building and disembark at the Steamship Terminal Building just outside the BC Legislature.

A one-way trip is 3.5-hours-long, which is about the same as BC Ferries’ Tsawwassen-Swartz Bay route when road travel times through Metro Vancouver and Greater Victoria are factored in, especially during rush hour.

The ferry cruise leaves Vancouver at 8 am and departs Victoria at 2 pm. It will pass through the Southern Gulf Islands and Haro Straight, and provide views of Saanich Peninsula just north of Victoria.

Onboard amenities include premium leather seats with high backs and headrests, flip-out or built-in tables, power outlets for charging electronic devices, Wi-Fi, and food and drink options with a selection of local craft beers and wines.

When the service was first announced last year, operators said a one-way ticket would cost $80, but information posted on the company’s new website lists seats for between $120 to $240.

The $120 “Comfort” and “Premium Comfort” experiences provide complimentary mid-ship seat selection and seat layout ideal for larger groups while the $240 “First Class” and $199 “Royal Class” experiences include premium seating, a three-course meal, and complimentary coffee, tea, and water. Seats for children start at $60 in the “Comfort” and “Premium Comfort” options.

Comparatively, a one-way adult ticket on BC Ferries’ Tsawwassen-Swartz Bay route is $17.20 and a one-way “off-peak” fare on HeliJet’s scheduled helicopter flights from Waterfront Station in downtown Vancouver to Victoria Inner Harbour starts at $170. The HeliJet flight is approximately 35 minutes one-way.

Another privately operated service geared for commuters, with more economical pricing, could launch later this year. The Seattle-based operator of the Victoria Clipper previously made public last year its plans to introduce a high-speed catamaran service from an undetermined location in downtown Vancouver to its current Belleville facility in Victoria.

A similar high-speed catamaran service for commuters is also planned from downtown Vancouver to Nanaimo, with a one-way trip performed in just 68 minutes. Victoria-based Island Ferry Services was selected as the preferred operator for this service last month.

These three services are the latest attempts to launch a high-speed passenger ferry service after a number of successive failed services over the past three decades.

However, there will be much more demand for such services this time given that there has been significant regional population growth, densification in downtown Vancouver, growth in the workforce, growth in tourism, and improved transit services like the SkyTrain Canada Line, which is within a walking distance to the downtown ferry terminal.

The last time downtown Vancouver was serviced by a high-speed ferry service was eleven years ago with the route to Nanaimo operated by Harbour Lynx, which went bankrupt when the 300-person capacity catamaran vessel suffered a fatal engine failure.