The upper limit of the property tax increase being considered within the City of Vancouver for 2021 has been approved by city council.

The decision was made early Tuesday evening, when city council voted on each 2021 budget item separately.

For the item of a 5% property tax hike in 2021, city council approved the measure in a 6-5 vote, with NPA councillors Melissa De Genova, Lisa Dominato, Colleen Hardwick, and Sarah Kirby-Yung and independent councillor Rebecca Bligh opposed.

This also accounts for a city council-directed tax shift of 0.5% property tax share from non-residential to residential, accounting for the dire economic impact businesses have faced as a result of COVID-19.

The municipal property tax increase does not include provincial school taxes, and other property taxes other authorities such as  TransLink and Metro Vancouver Regional District.

The decision follows hearing from nearly 250 public speakers over the course of several days.

The basis of the 5% property tax increase is formulated on the city’s decision to draw on $57 million from its revenue stabilization reserve in 2021 to offset the expected $60 million in revenue losses. This adds to the $34 million that was taken out of the reserve earlier in 2020 to directly deal with the emergency measures and fiscal impact of the COVID-19 pandemic.

Prior to the pandemic, this specific city reserve stood at about $146 million, and it is intended for only inclement weather such as snowstorm and windstorm response, catastrophic events such as pandemics, forest fires, and major earthquakes, environmental hazards such as oil spills, extraordinary public safety situations such as riots and terrorism, and economic downturns and unforeseen changes in revenue.

However, given the importance of this emergency reserve, it will need to be replenished in the future, most likely with further tax hikes.

Those in city council opposed to the property tax hike also criticized the budgetary approach, asserting that it does not shave down enough to only focus on core priorities and services, nor does it support struggling businesses and COVID-19 recovery to the level that is required, suggesting major non-essential expenditures have been included.

“I have concerns about the path we are on, and what I see is an unsustainable path. I do not see any effort or shift to change that path and where we’re going. I speak back to a number of financial forecasting frameworks that have been delivered by the city over the last number of years, and they’ve identified the increasing gap between revenues and expenditures,” said Dominato.

“We need to think about this in terms of affordability, which is the top identified issue across age demographics including housing. But it’s not just about housing, it’s also around the services that people expect to have and to access as part of the day-to-day living quality of life, and there are certain things we can’t delegate elsewhere that we are simply responsible for.”

Dominato also took issue with a 1% budget cut for every city department, regardless of whether certain departments bear more direct, frontline responsibilities during the pandemic and the resulting social and economic issues, such as the engineering department’s increased pressures for street cleaning.

Bligh brought attention to the combined impact of various costs from user fees on utilities and services, and the measures of other tax authorities, and echoed concerns over an inadequate level of assistance provided to businesses, which are expected to conduct mass layoffs in January after the holiday season.

“This is not our money, we are absolutely stewards of the public purse, and with that comes immense responsibility. It’s not for us to take that amount of money and go shopping around. We need to be extremely responsible for what we do and how we spend it,” said Bligh. 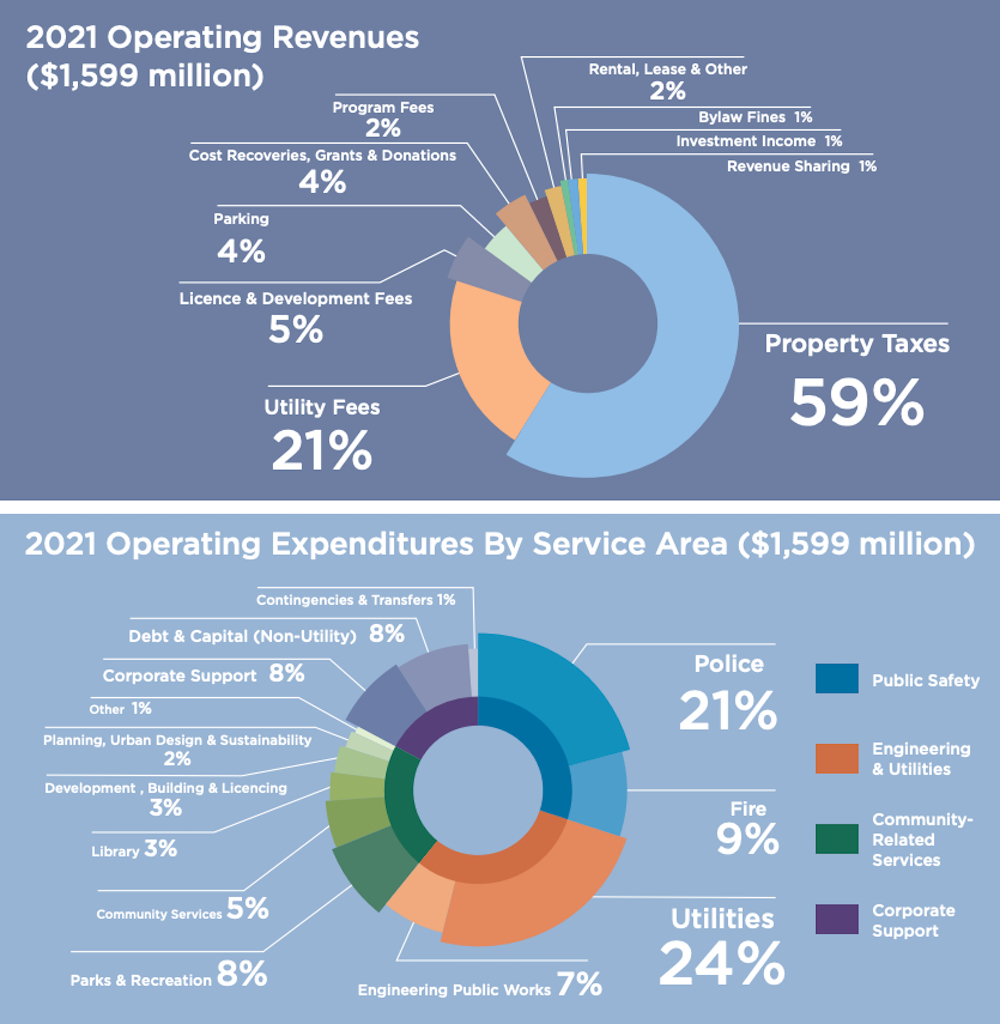 Much of the budgetary debate focused on the Vancouver Police Department’s (VPD) budget in the backdrop of the idea of “defund the police.” In another vote during the same deliberations, city council decided to keep the 2021 police budget at $340.6 million, which is $6 million less than what was requested by the police board.

This is also $3 million less than city staff’s budgeted amount for the VPD, which warned it would mean 61 fewer police recruits in 2021, and put further stress on police responses for the rise in criminal behaviour and misdemeanours, and mental health and opioid overdose calls that require a police presence.

COPE councillor Jean Swanson unsuccessfully called for a further $5 million decrease of the police budget to $335.6 million, which would have resulted in a reduction of 110 police officers.

City council also decided to redirect $8 million in budgetary cost reductions previously made to the capital plan for new infrastructure and facilities towards its new priorities under the operating budget.

Their added priorities to the budget include $150,000 for “Indigenous languages revitalization,” $100,000 for “South Asian apology,” $72,000 for citizen advisory committees, $380,000 to the city clerk to “support local democracy,” $150,000 to the Vancouver Public Library to remove barriers to access for residents with outstanding fines, and $200,000 for Indigenous planning and relations.

“If I were the king, I’d put a lot more in for housing. I’m not too worried about the 5% property tax increase, although I don’t really like it, but there are many categories of people who can defer property taxes if they need to. But the thing is, the city needs a better source of revenue rather than flat property taxes where every property owner pays the same rate regardless of if they own a $70-million mansion or a $400,000 condominium. The city needs a progressive tax.”

“It has been a tough year, revenues have been down, closures of facilities, staff temporarily laid off or furloughed, we didn’t fill vacancies… our budget reflects our real core values, our core services, housing, equity, reconciliation, climate, and support for the economy because our businesses have been so hit as well,” said Green Party councillor Adriane Carr. “In this budget, I believe we are achieving movement forward in a stronger way than I have ever seen. It is a time when people should be thinking about the kind of city we want Vancouver to be as we move out of COVID.”

On Monday evening, Surrey City Council also approved the 2021 budget for its municipal government, including a 2.9% property tax increase — maintaining the same rate of increase experienced over the past two years — and a $300 Capital Parcel Tax, which is applied on every home and is a tripling of the previous rate of $100.