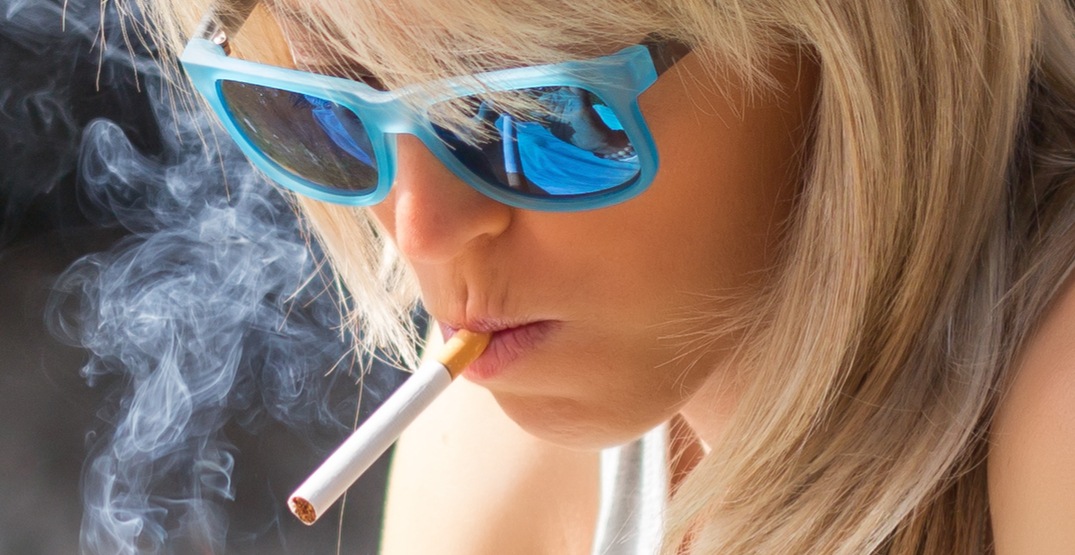 In move she said comes from her “own personal experiences around the city,” as well as input from citizens, a City of North Vancouver councillor introduced a motion this week asking staff to research the possibility of banning smoking in any public space in the city.

And while the city already has a smoking bylaw – which prohibits smoking within 7.5 metres of public places such as playgrounds, beaches, concessions, skate parks, and picnic areas – Councillor Jessica Mcllroy would like to see things go a step further.

“There is no completed ban for any park spaces,” she told Daily Hive. “It includes plazas, but only two, both are by one of our community centres.”

In essence, “the current bylaw doesn’t include our most heavily used public parks and plazas, such as the Civic Plaza by City Hall and the Library, and the very popular Shipyards and waterfront area.”

Mcllroy said staff were asked to look at the possibility of banning smoking in all public parks, plazas and our designated multi-use pathways, “but with an equity lens that takes into consideration the impacts on those who don’t have options for a private space to smoke.”

At this point, “we’ll have to see what recommendations the staff come back with to see if that means any areas would be exempt,” she added.

The first-term councillor said the motion also deals with concerns it would like addressed around issues like public health – primarily relating to second-hand smoke – waste issues from cigarette butts and packaging, and fire safety issues, as a result of ever-more-common hot, dry periods.

Mcllroy said she has also asked staff to look at the bylaw’s definitions and wording “considering the recent dramatic increase” in vaping, in particular by youth.

After the unanimous approval o the motion by City council on Monday night, Mcllroy said city staff have now been asked to connect with the RCMP, on the enforcement side, and Vancouver Coastal Health, on the public health side, “and do an internal review and then bring the recommended bylaw updates for Council to vote on.”

While she noted there’s no defined time frame for this process, Mcllroy said she doesn’t expect it “to take a significant period of time.”

In addition to her motion, Mcllroy said the city is is also in the process of reviewing business license applications for cannabis retails stores, and “we are hearing concerns about what that could mean for the use of cannabis in public spaces.”

Because it was drafted prior to legalization, the city’s current smoking bylaw doesn’t include cannabis use, “it would be best to have any regulatory measures completed before these retail outlets open.”

In the meantime, Mcllroy said she’s “happy to see that these potential changes are of interest to people,” and noted she has been receiving “great feedback” on things to consider as things proceed.

“I’m looking forward to continuing to engage our citizens and businesses, and broad community members so that we are all working together on building a healthy and sustainable city,” she added.