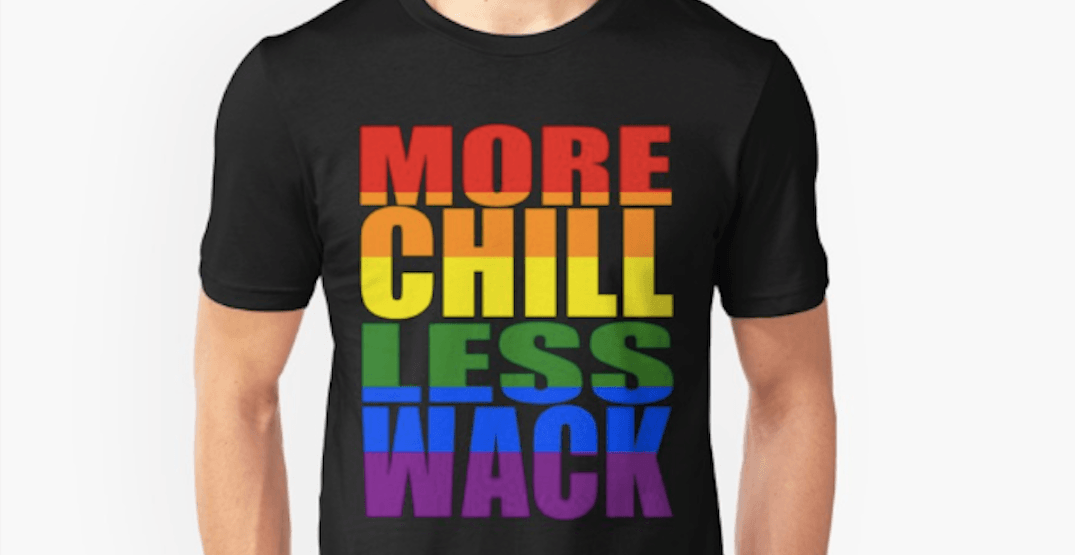 What started as a statement against “horrible, hateful, homophobic and transphobic comments” made by some residents in her community, morphed into a surprise business venture for Chilliwack School Trustee Willow Reichelt.

Reichelt is the designer of the “More Chill, Less Wack” t-shirts that are suddenly in demand – thanks in part to the city’s recent decision not to install a rainbow crosswalk in the community.

“I actually designed this before the city council turned down the rainbow crosswalk, but their decision definitely increased my sales,” she told Daily Hive.

Initially, she created just a single shirt for herself to wear while attending the first Pride BBQ for Chilliwack.

“I wanted something to wear that reflected my rejection of the aforementioned comments and my support for the LGBTQ2 community,” she said. “I am an artist (having studied Visual Arts for two years at UVic and trained as an art teacher), so I decided to design my own t-shirt.”

The phrase, she said, “is a play on words and a call for everyone in Chilliwack to be ‘More Chill, Less Wack’ and stand up for equality.”

Originally, Reichelt figured “maybe half a dozen” of her close friends would buy the t-shirt. It turned out to be way more popular than that.

“I have been blown away by the response,” she said. “I have sold over 130 t-shirts, plus stickers and other items.”

Even with the shirts now in demand, Reichelt said she never intended — and still doesn’t want — to make any personal profit off sales of the t-shirts.

As such, Reichelt said she donates 100% of her artist commission from the sale of the t-shirts to the Chilliwack Youth Health Centre (CYHC).

And her sales thus far have equated to over $600 donated to the CYHC.

There is one downside, however.

“Unfortunately, the success of this design has spurred some unscrupulous people to steal it and pass it off as their own,” she said.

Reichelt stressed that she is “the only legal seller” of the shirts, and only shirts purchased directly from her website will result in donations to the CYHC.

Reichelt response isn’t the only one that takes issue with council’s decision and some attitudes in the community.

Earlier this month, Chilliwack resident Marty van den Bosch painted his own rainbow walkway outside his home after council’s decision regarding the rainbow crosswalk.

Van den Bosch said council’s decision left him feeling disappointed, especially since many residents had rallied in support for the crosswalk.

“I was just really disappointed that the city didn’t even give an opportunity for dialogue,” he told Daily Hive. “And I thought hey, you know, I have private property and we have a large, wide sidewalk.”

He and his wife Kristy painted a 38-ft-long rainbow crosswalk on their own property, with the help of their friend Lorna Seip, a member of the LGBTQ community who owns a painting company.

As for city council, van den Bosch wishes they would have given supporters of the rainbow crosswalk alternative options.

“Show some support for the three to five per cent of your community that works here, lives here, and loves here, you know? I don’t think it’s a big ask.”

-With files from Simran Singh