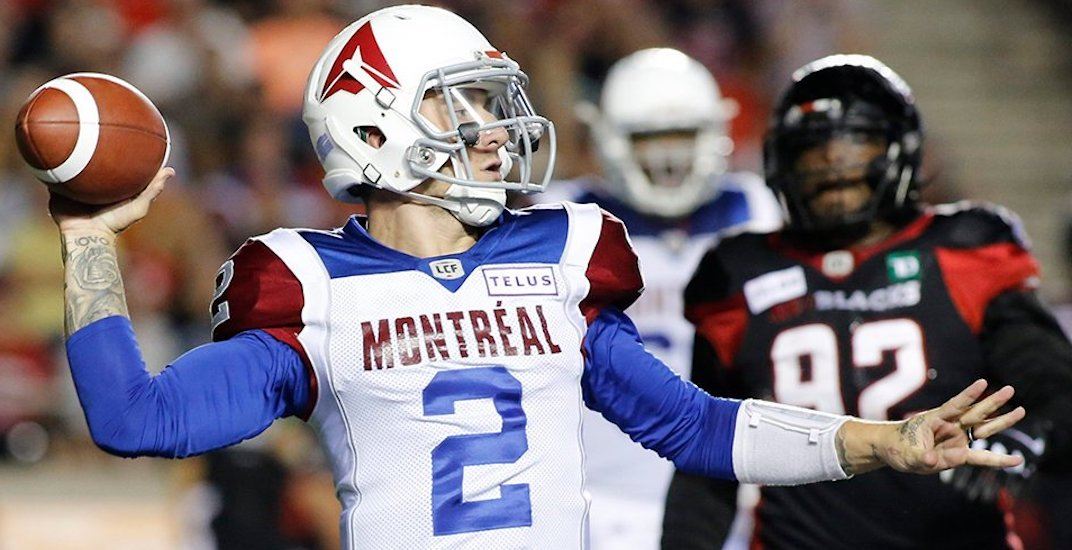 The CFL is saying goodbye to Johnny Football.

The Montreal Alouettes sent out a media release on Wednesday, explaining that the team had been directed by the CFL to terminate Johnny Manziel’s contract after it was found that he had “contravened the agreement which made him eligible to play in the league.”

Not only will Manziel not be allowed to return to the Alouettes this season, the high-profile quarterback won’t be allowed to play for any of the CFL’s other eight teams.

Given his past transgressions, CFL commissioner Randy Ambrosie had been hesitant to allow Manziel to play in the league in the first place.

“[Manziel] had an incident relating to violence against women,” Ambrosie told Daily Hive last year. “We had to separate ourselves from our lives in the game of football and our responsibility to our fans and to our communities that we serve. I think what I felt good about was making sure we disconnected ourselves and leaned on experts that could help us understand the issues that were important.”

“We are disappointed by this turn of events,” said Alouettes general manager Kavis Reed, who traded two first-round draft picks to acquire Manziel last July. “Johnny was provided a great deal of support by our organization, in collaboration with the CFL, but he has been unable to abide by the terms of his agreement.

“We worked with the league and presented alternatives to Johnny, who was unwilling to proceed.”

Manziel’s agent has since released a statement, which contradicts what the CFL is saying.

“Johnny decided to end his contract with the CFL,” he said. “Johnny did not break any laws or violations, he is just more interested in playing in the AAF and a more ‘NFL’ style of football to better his chances of playing in the NFL.”

I want to thank Coach Sherman, my teammates, and the CFL fans. My time there reestablished my love for the game of football and the work that goes into it. I look forward to exploring new options within the United States.

A college football star with Texas A&M, Manziel won the Heisman Trophy in 2012 before being drafted in the first round of the NFL Draft by the Cleveland Browns in 2014. He struggled on the field and found trouble off of it, and by 2016 found himself without a job.

After two years away from the game, Manziel made a comeback in the CFL, signing with the Hamilton Tiger-Cats. He was traded to Montreal before ever taking a snap with the Ticats, and didn’t have much success, completing 106 passes on 165 attempts for 1290 yards, with just five touchdowns and seven interceptions in eight games.