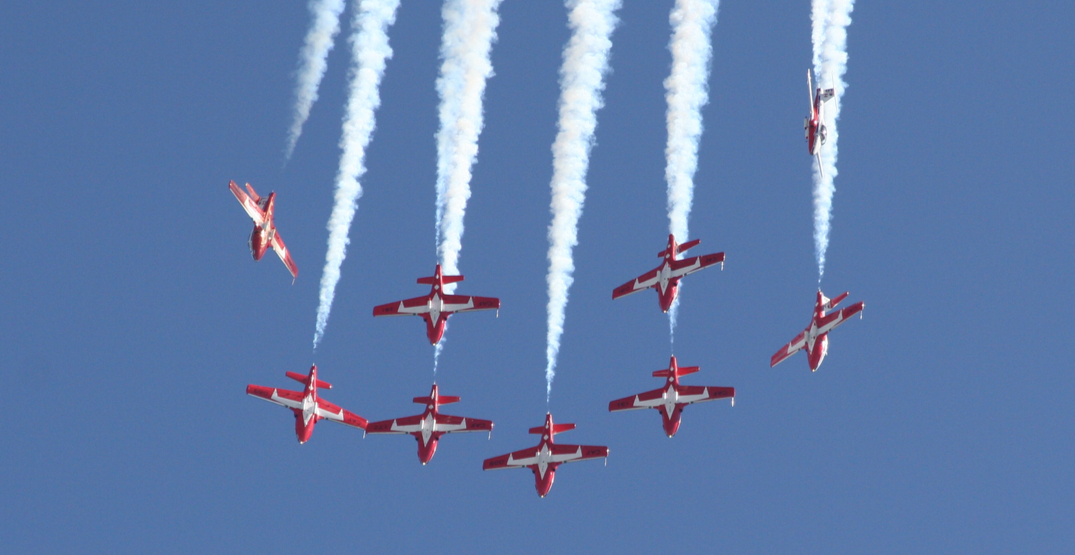 Keep your eyes on the sky throughout the day on Friday.

The famed Canadian Forces Snowbirds will be flying over Vancouver as part of Operation INSPIRATION, which salutes those doing their part to fight the spread of COVID-19 in Canada.

Expect to see the team’s signature nine-jet formation and trailing white smoke. Flyovers will take place at an elevation no lower than 500 feet above all obstacles.

On our way to Vancouver! pic.twitter.com/CwpFcdBcXM

“Through Operation INSPIRATION, we not only want to salute the front-line healthcare workers, first responders, and essential workers, but also all Canadians doing their part to stop the spread of COVID-19,” Lieutenant-Colonel Mike French said in a release. “We want Canadians to know we’re in this with you.”

The flyover will be followed by an aerobatic display over Boundary Bay in White Rock on July 18. They’ll also be flying over the Fraser Valley between August 6 and 8 as part of the Abbotsford International Airshow’s SkyDrive.

Thanks to @CFSnowbirds for the sneak peek of Operation INSPIRATION. Standby for tomorrow's flyby 🛫 around lunchtime.

In May 2020, the Snowbirds had to cut their westward cross-country Operation Inspiration tour to lift Canadians’ spirits during the pandemic. Captain Jennifer Casey was killed in a crash involving a CT-114 Tutor aircraft near Kamloops.

An investigation later deemed a bird strike responsible for the accident, which also injured Captain Richard MacDougall. The Snowbirds were given clearance to resume flights in August 2020.

The CF Snowbirds’ flyover will begin at 3 pm and is as follows:

1/2
Here’s our approximate plan for today’s flight over the Greater #Vancouver Area to show our support to Healthcare workers for their work in the last year.😁 Take Off YVR: 3:00pm