Quebec singer Céline Dion has placed 46th on Forbes Magazine’s 2018 list of the richest women in the United States.

Dion’s fortune is estimated at $430 million US which equates to just over $565 million Canadian. The Quebec millionaire qualified for the list among the United State’s richest women because she is a dual citizen and is a current resident of Nevada. 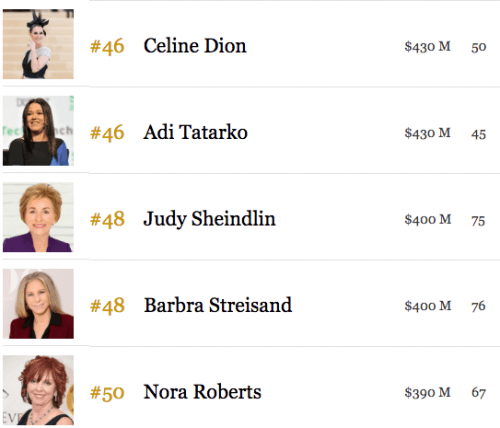 The 50-year old has sold an estimated 200 million albums worldwide and has earned the bulk of her fortune from her Las Vegas residencies.

Since the 2003 opening of her A New Day show, Dion has made some $400 million performing 70 times a year in Sin City. Pretty impressive considering she was a high school drop-out.

Along the theme of rich women with acute accents in their names, Beyoncé came in 53rd place with $355 million. Other female singers, Madonna and Barbara Streisand came in 36th and 48th, with $590 and $400 million respectively.

Taylor Swift rounded out the top 60 list with $320 million.

Diane Hendricks, the owner of a wholesale roofing, siding and window business, topped the list, earning an estimated $4.9 billion.