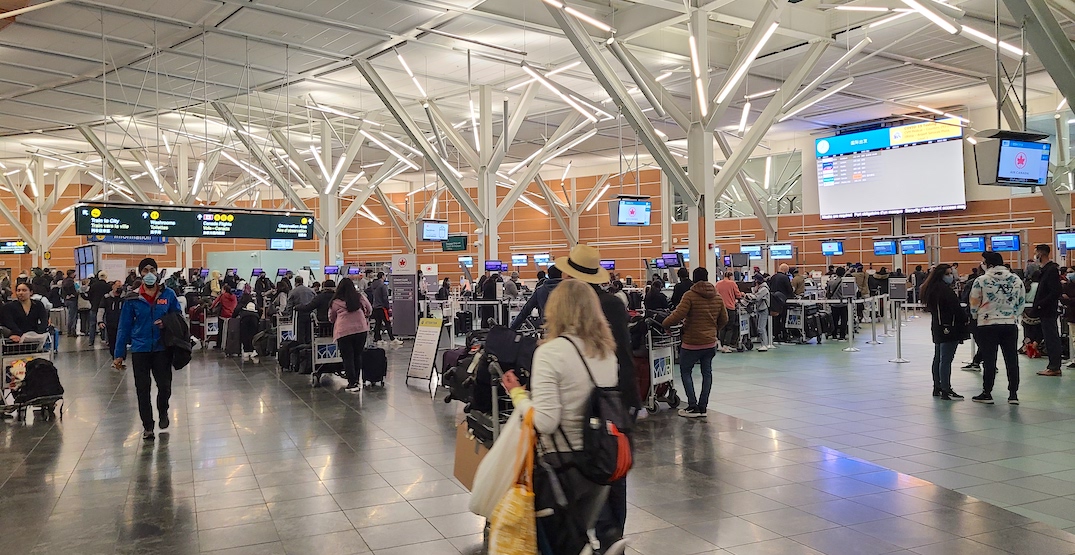 You’ll need to pack your patience if you’re flying out of a Canadian airport in the coming months.

A staff shortage at the Canadian Air Transport Security Authority (CATSA) means only a fraction of security screening stations can open, leading to massive lineups that have made some passengers miss their flights.

What’s more, the problem probably won’t be resolved anytime soon, according to David Flowers, national president of the International Association of Machinists and Aerospace Workers. He told Daily Hive it could take months to hire and train replacement staff for those who were laid off during the pandemic and never came back.

“This will only get worse as summer goes on,” he said. “These are highly skilled people working with different machinery … it will take some time to clear this problem.”

Workers tell Daily Hive that intense pressure on the floor, delayed washroom breaks, lack of respect from upper management, and low pay are some reasons why more employees are leaving than applicants are signing up.

“We’re hemorrhaging people,” a manager at the Ottawa International Airport told Daily Hive. “The airport’s added a bunch of new flights recently. We’ve known for ages that these new flights were coming and that we need to schedule appropriately — and they’ve done nothing to meet these demands.”

The Ottawa airport has five domestic security lanes, and the manager said he’s lucky to get two open these days.

He spoke to Daily Hive on condition of anonymity to protect his livelihood. His employer is GardaWorld, a third-party security service provider contracted by CATSA to serve the Ottawa airport.

The screening agents get mixed messaging from CATSA and Garda, the manager said. Garda pushes them to get passengers through faster, but CATSA demands strict adherence to safety rules. The screening officers are watched on camera, and sometimes CATSA auditors come through the lineup to make sure they’re doing their job correctly.

If an employee is found to have missed something on the line, the manager said their certification to operate that station (X-Ray, for example) is revoked. That exacerbates the problem for schedulers, who need to find replacements while the employee re-does their training.

“When I come to my screening officers and say, ‘is there anything we can do to pick up the pace?’ They laugh at me and say do you want speed or accuracy? You can’t have both.”

The staffing crunch means security screeners have to delay their breaks because there may not be someone qualified to take their place while they use the washroom or go for lunch. The manager told Daily Hive the longest he’s had to delay someone’s break was by four hours.

The problem is heightened for women on the floor because at least one woman is needed at each line for pat-downs as passengers come through.

“In all my years of being the manager, my philosophy is to take care of my people first. And I feel like I let them down when I can’t give them these breaks that they’re looking for and that they’re entitled to.”

Security screening agents at the Ottawa International Airport are paid between $19 and $23 per hour.

The manager said he’s raised the issues with higher-ups at GardaWorld multiple times and is frustrated with their lack of response. In one meeting, he said the company told him it’s looking to increase its staffing levels by December.

“That does not help us now,” he said.

GardaWorld did not answer Daily Hive’s questions about delayed breaks, increasing worker pay, or the breakneck pace of work. In a statement, the media relations team attributed the long lines to a pandemic-related staff shortage coupled with increased passenger volume.

“As is the case for many other Canadian businesses, the pandemic has generated higher levels of absenteeism and a staff shortage,” GardaWorld said. “We fully understand that the current situation can cause inconveniences to passengers, and we are working closely with our partners to resolve these issues as quickly as possible.”

The situation is similar at other major Canadian airports, Flowers said. Training to operate the various machinery can take weeks, and rushing through training only places further stress on fully qualified workers.

Daily Hive spoke to two Vancouver International Airport security officers this week, one of whom quit last month over the job demands. They both said missed breaks and low pay contributed to an intense staffing shortage.

The CEO of CATSA issued an apology to travellers on Tuesday for lengthy wait times at Canadian airports, saying pent-up travel demand following the pandemic is overwhelming security capacity.

“This follows two tumultuous years that resulted in a significant number of layoffs throughout the aviation industry, including the security-screening workforce,” Mike Saunders said in a news release.

The public is asked to remain patient while going through the security lineup and remember that packing appropriately with liquids in the designated one-litre plastic bag can quicken the pace.