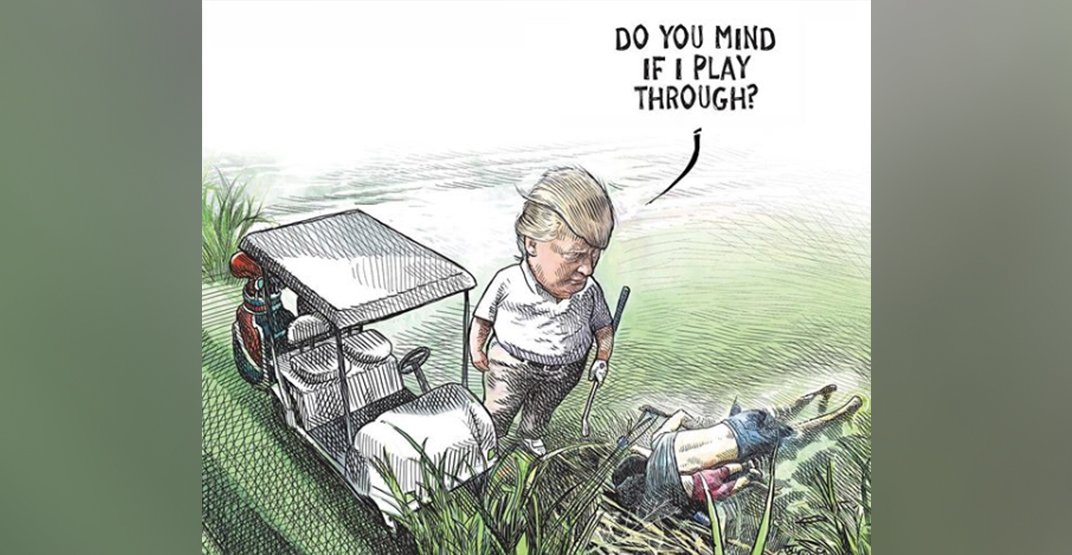 A New Brunswick cartoonist who worked on contract will no longer have any of his cartoons published in any of the province’s papers, following a cartoon of his that depicted US President Donald Trump standing over two dead bodies while playing golf, and asking if he could “play through.”

The bodies depicted are those of Oscar Alberto Martínez and his 23-month-old daughter, Angie, who died while trying to cross Rio Grande River to get to America last week.

Then, on June 28, de Adder announced he had been let go from “all newspapers in New Brunswick.”

For de Adder, who identifies as a “proud New Brunswicker,” the decision “hurts pretty bad.”

Many took the decision to let de Adder go as the publication company’s direct response to the cartoon.

And in a series of tweets, de Adder questions the reasoning behind the decision.

He notes that, “it got to the point where I didn’t submit any Donald Trump cartoons for fear that I might be fired.”

“When you work on the editorial pages at an Irving owned newspaper for 17 years, you learn how they operate,” he writes in another tweet. “It’s not a front row seat, but it’s a third row seat. You definitely get a clear picture of how they run a newspaper.”

He adds that the Premier of New Brunswick “is a former Irving Oil executive and any cartoon I drew that was slightly critical of him was systematically axed.”

Ultimately, de Adder says, he was let go because “I wanted to do my job as an editorial cartoonist, and they wanted me to do their job.”

But in response to de Adder’s tweets, and the attention the cartoon garnered on social media, Brunswick News Inc. (BNI) – which owns the papers the cartoonist was let go from – issued a statement regarding the situation, calling it a “false” narrative.

“It is entirely incorrect to suggest Brunswick News Inc. cancelled its freelance contract with cartoonist Micheal de Adder due to a cartoon depicting Donald Trump currently circulating on social media,” said BNI. “This is a false narrative.”

The statement noted that in fact, “BNI was not even offered this cartoon by de Adder.”

Rather, “the decision to bring back reader favourite Greg Perry was made long before this cartoon, and negotiations have been going on for weeks.”