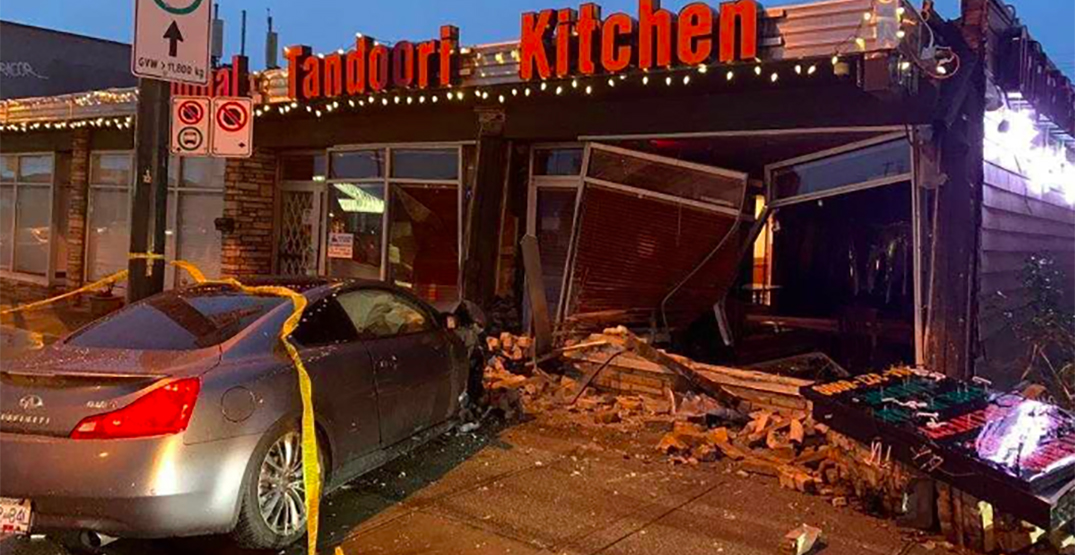 A driver left a trail of damage in South Vancouver over the weekend and ended up crashed through the window of Original Tandoori Kitchen Sunday morning.

A photo and video submitted to Daily Hive shows the grey Infinity mounted on the sidewalk with its crumpled front end near Original Tandoori Kitchen’s smashed window.

Before crashing into the restaurant, the driver was caught on camera mounting another curb, knocking over a bench, and driving on the sidewalk for several metres before going back on the road.

“They hit our business, Nanda Jewellers, at 51st and Main before hitting a few additional cars and then ultimately crashed into the tandoori restaurant on 56th and Main,” Anil Nanda of Nanda Jewellers told Daily Hive.

Nanda also provided a video showing some of the damage:

According to VPD Const. Tanis Visintin, the incident took place on Monday, just before 4:30 am.

“Officers responded to a vehicle that had crashed into the Tandoori Kitchen in the area of 56th Avenue and Main Street,” she told Daily Hive. “It is suspected that the driver was impaired at the time of the crash.

Visintin said despite the extensive damage to the restaurant, “thankfully no one was injured.”

The impaired investigation is ongoing.