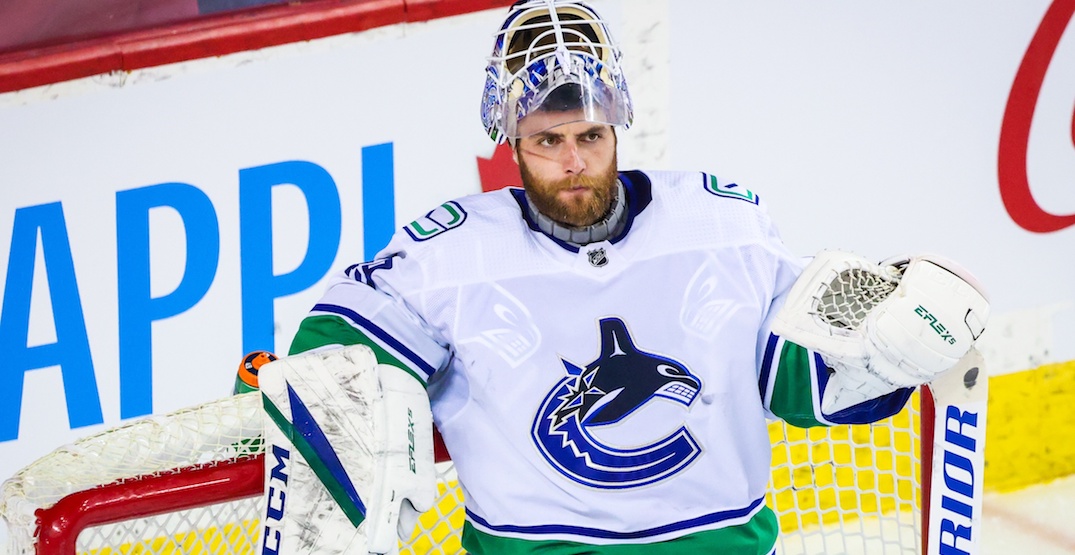 The Vancouver Canucks are looking to move salary, and their backup goalie is a prime candidate to be traded.

GM Jim Benning is trying to trade Holtby, according to a report from CHEK’s Rick Dhaliwal, though it’s unclear if it can be done without retaining salary or adding a draft pick.

As of right now, the Canucks are still trying to trade Holtby first, have not made a decision on buyout yet.

Holtby has been in rumours since before last week’s expansion draft, with teams reportedly kicking tires on the former Vezina Trophy and Stanley Cup winner. He may not be an easy player to move, given the former Washington Capitals star is coming off back-to-back seasons with save percentages below .900.

The Lloydminster, Saskatchewan native, has a good reputation around the league, but his contract will scare away teams, even though there’s just one year remaining on it. Holtby comes with a $4.3 million cap hit and is due to make $5.7 million next season on a back-loaded deal. That’s a lot of money for a backup goalie, which is what the 31-year-old netminder would be in Vancouver, behind Thatcher Demko.

There are multiple teams interested in Holtby, but not likely at his current cap hit or without receiving something extra from Vancouver. Among them are the Colorado Avalanche, Toronto Maple Leafs, Philadelphia Flyers, and Buffalo Sabres, according to Sportsnet’s Elliotte Friedman. The New Jersey Devils were linked to Holtby by David Pagnotta of The Fourth Period.

The Canucks can retain salary in a trade, though Benning will need to be careful about such a move because finding a reliable replacement in free agency won’t be cheap either. Vancouver could try to add a draft pick to sweeten the deal, but they’ve already traded away their second- and third-round picks in 2022. Benning made just one selection in the first four rounds of last week’s draft and none in the first two rounds of the 2020 draft, so he can ill-afford to lose more picks.

Vancouver could buy out Holtby’s contract, and that would save them a lot of money this year, reducing his cap hit to $500,000. The problem with the buyout option is that the team would then be hammered with a $1.9 million cap hit in 2022-23.

Benning still has plenty of work to do, even after Friday’s blockbuster trade with the Arizona Coyotes. By dispatching Loui Eriksson, Jay Beagle, and Antoine Roussel, the Canucks save $12 off their cap next season. But Vancouver also added Oliver Ekman-Larsson, who comes with a $7.26 million cap hit.

The Canucks currently have over $21 million in cap space, according to CapFriendly, but that will be eaten up quickly, as they still need to re-sign restricted free agents in Elias Pettersson, Quinn Hughes, Conor Garland, and Jason Dickinson. They also need to add to their blue line, which currently has just four players under contract for next season.

Benning says trade interest is “very high” on Nate Schmidt, whose contract carries a $5.95 million cap hit. He is a candidate to be traded while pending unrestricted free agent defenceman Travis Hamonic could be re-signed on a cheaper contract.