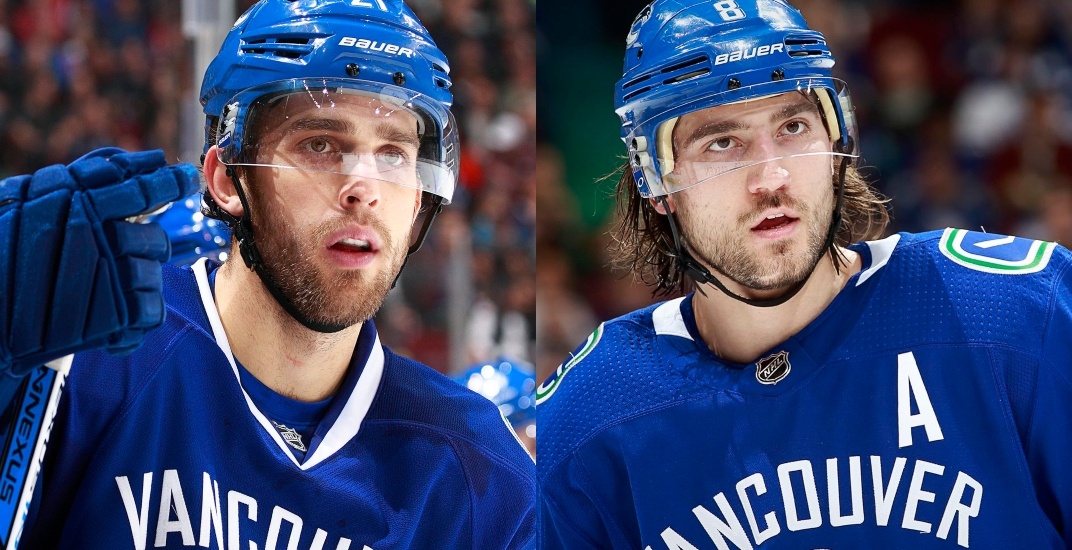 The Vancouver Canucks may not yet be done in free agency.

Three free agents were added to the fold by the Canucks on July 1 – all of them defencemen – in Tyler Myers, Jordie Benn, and Oscar Fantenberg.

That shored up the team’s wonky blue line, but the league’s 25th-ranked offence last year could use some help on their forward lines also.

Benning on recapture: It was a kick in the shins. We knew it could come, it happened. It kind of stopped us from adding 1 more piece to our team this year. We're happy we're able to re-shape our defense, I feel it is a lot better now, we have a lot more experience.

He should have also mentioned the contracts of Loui Eriksson, Jay Beagle, and Brandon Sutter, but I digress.

With Brock Boeser still to be re-signed, the Canucks won’t have much cap space to add more players unless they move some money out the door.

According to a report from TSN 1040’s Matt Sekeres, the Canucks maybe be trying to do just that, as he says both Chris Tanev and Sutter are available.

With a good start to season. Not much value now.
— Schaller’s camp pursuing a change of scenery. Trade would return almost nothing. Just send $1.9M out.
— Getting concerned that there is no landing spot for Eriksson unless Canucks willing to ship out prime asset w/ him.

If the Canucks could find a new home for both players, that would clear a combined $8.825 million in cap space for next season. The problem, of course, is that Jim Benning wouldn’t exactly be selling high on either player.

Tanev had yet another injury-plagued season, and has just one year left on his contract. The 29-year-old may not be a top-pairing shutdown defenceman any longer, though it is difficult to judge a player who never seems to be at 100% health. With Myers and Troy Stecher on the right side, not to mention Benn – a left-shot who has experience playing his off-side – Tanev could be expendable.

Many of the issues that hurt Tanev’s value also apply to Sutter, to an even more severe degree.

The 30-year-old centre appeared in just 26 games last season and has missed significant time in three of his four years in Vancouver.  Sutter has two years left on his contract, carrying a $4.375 million cap hit – which likely makes him untradable.

Sekeres also notes that Tim Schaller would like to be moved, just one year after the Canucks signed him to a two-year contract worth $1.9 million per season. Schaller was a disappointment last season, scoring just 10 points (3-7-10) in 47 games.

Speaking of disappointments, the Canucks will be hard-pressed to move Eriksson, given he comes with a $6 million cap hit with three years left on his deal. Perhaps that will change after next season – as he will be owed just $5 million in real dollars over the final two years of his contract after his bonus is paid out on July 1, 2020 – making his contract palatable for a non-cap team.

As for who the Canucks could have their eye on in free agency, a number of intriguing top-six winger options remain available should they successfully clear space.

“If we sign players, it’s with the belief that they can be top-four defencemen or top-six forwards, and be part of the group moving forward,” Benning said prior to the start of free agency, after he already traded for JT Miller.

Ryan Dzingel, Micheal Ferland, and Marcus Johansson are probably the most appealing for the Canucks, given they’re all under 30 years of age.

Dzingel, 27, is the highest-scoring UFA still available after notching 56 points in 78 games split between the Ottawa Senators and Columbus Blue Jackets.

Ferland is a 27-year-old power forward who can contribute offensively. The former Flames winger scored 40 points in 71 games with the Carolina Hurriacanes last season.

Johnasson, 28, is a player the Canucks have had their eye on in the past. He scored 30 points in 58 games split between the New Jersey Devils and Boston Bruins. He finished seventh in playoff scoring on the Bruins, with 11 points in 22 postseason games.