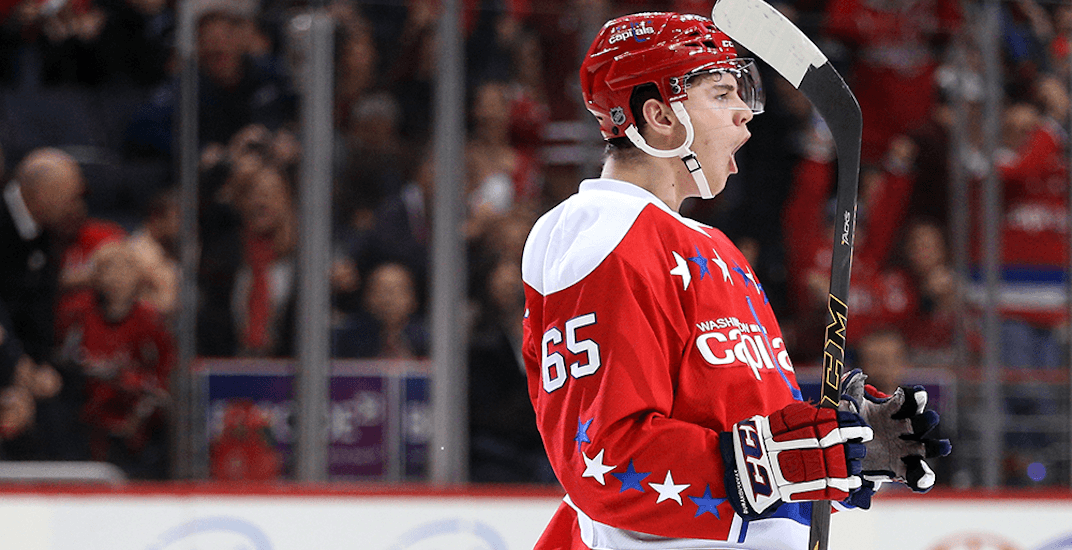 The Vancouver Canucks are back in the rumour mill.

Speaking during the second intermission on Hockey Night in Canada, Sportsnet’s Chris Johnston linked the Canucks with Andre Burakovsky of the Washington Capitals.

“Another name that’s been out there is Andre Burakovsky, the talented Washington Capitals winger who has fallen a little bit out of favour,” said Johnston. “He’s sitting out his third straight game as a healthy scratch. His name has been out there on the trade market, in the rumour mill, and one of the teams I believe that’s inquired about him is the Vancouver Canucks.”

A first round pick by the Capitals in 2013, the fifth-year NHLer was part of Washington’s Stanley Cup winning team last spring. He had just two goals and four assists during the Cup run, scoring both of his goals in Game 7 of the Eastern Conference Final.

The 6-foot-3, 201-pound left winger scored 12 goals and 13 assists in just 56 games last year, but has just five goals and three assists in 29 games this season.

The Capitals aren’t interested in a “futures deal” according to Elliotte Friedman, as they’re still in a win-now mode. That means Vancouver would need to give up a roster player rather than a draft pick – which should calm the nerves of most fans.

Washington views Burakovsky as a player that gets “good numbers with limited power play time,” Friedman added. Indeed, just 32 seconds of Burakovsky’s 11:36 average ice time has come on the man advantage – though his playing time is down from previous seasons.

Burakovsky is in the final year of a contract that carries a $3 million cap hit. He’s a restricted free agent at season’s end.

Just what the Canucks could offer the Capitals is open to speculation.