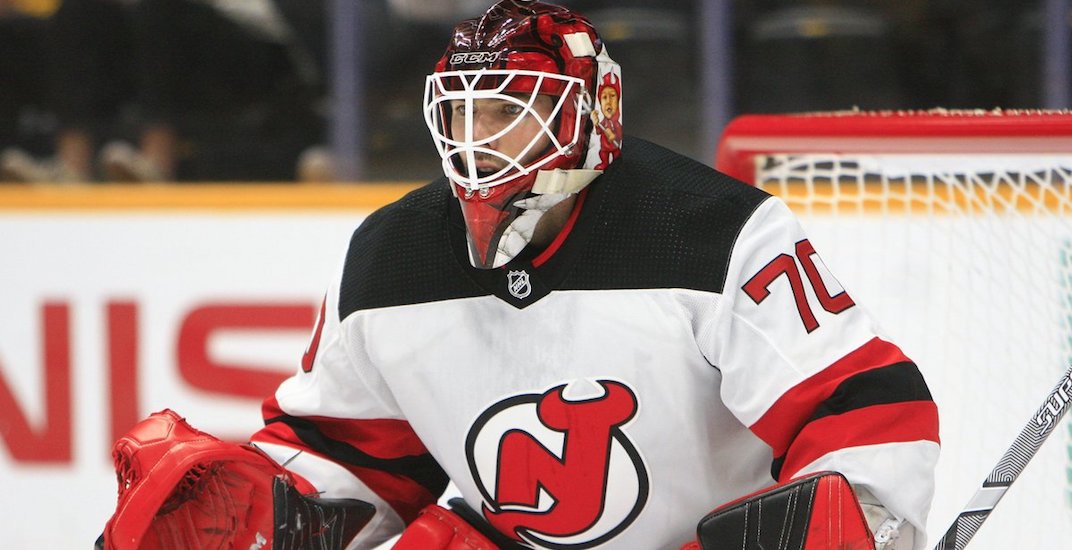 The Vancouver Canucks have made a last-minute trade deadline deal, acquiring goaltender Louis Domingue from the New Jersey Devils.

The Canucks are giving up minor league goalie Zane McIntyre in the trade.

The move is a salary dump for the Devils, who had Domingue — a veteran of 138 NHL games with Arizona, Tampa Bay, and New Jersey — buried in the AHL. The 27-year-old native of Saint-Hyacinthe, Quebec is in the last year of a contract that pays him $1.15 million.

But this move is an indication of something more serious.

Jacob Markstrom was not at Canucks practice Monday in Montreal, and Postmedia’s Patrick Johnston is reporting that the team’s No. 1 goalie has a knee injury.

Source tells me Canucks trading for Louis Domingue is because of concerns over a knee problem for Jacob Markstromhttps://t.co/YaMy8VC7MH

TSN 1040 is reporting that the injury could keep Markstrom out 3-4 weeks.

Donnie and the Moj hearing Markstrom could be out anywhere from 3-4 weeks with knee injury.#TSN1040

Canucks GM Jim Benning has since confirmed that Markstrom was injured during Saturday’s game against the Boston Bruins.

"Marky got hurt in the Boston game. Did an MRI this morning. He is flying back tomorrow and will meet with the doctors on Wednesday morning. Will have a better timeline after that." – Benning

With less than six weeks remaining in the regular season, a significant injury to Markstrom — arguably their best player this season — would be a huge blow to the Canucks’ playoff chances. Vancouver is currently just three points above the playoff bar, but with three games in hand on the ninth-place Winnipeg Jets.

The team will turn to rookie Thatcher Demko in Markstrom’s absence, though Domingue is capable of playing at the NHL level. Domingue, who is 6-foot-3 and 208 pounds, has a career .904 save percentage in the NHL. Demko’s save percentage in 20 games this season is .905.