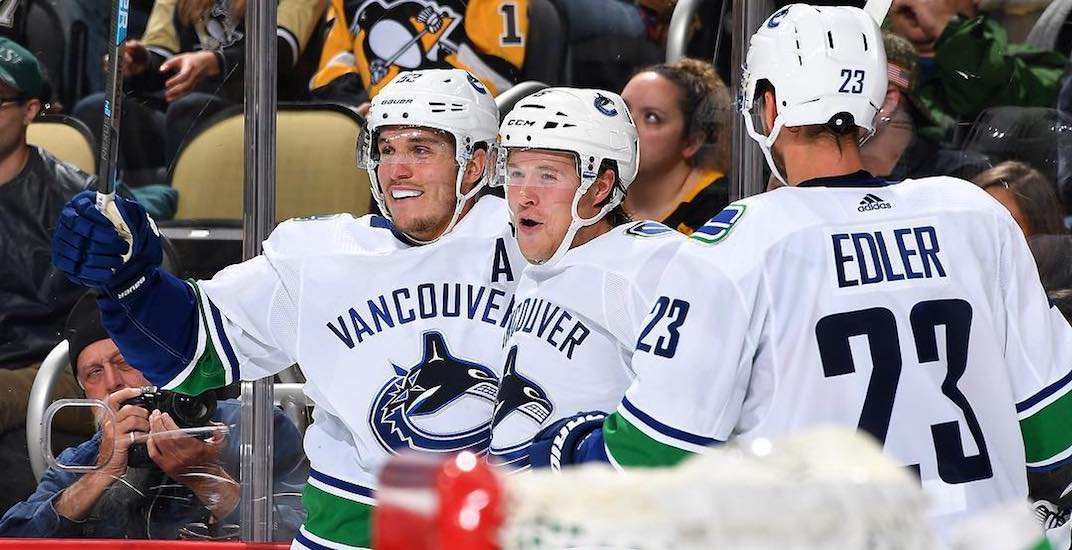 Coming out of the weeds of last season, the Canucks are riding high. No, you’re not hallucinating, they’ve actually been fun to watch.

Though Elias Pettersson got smoked, at least Mike Matheson was dispensed a two-game suspension. Even better: Anders Nilsson has been stoning opponents while Travis Green pushes the right buttons behind the bench.

Brock Boeser is back to potting goals, helping the Canucks get out of the joint last night with a 3-2 overtime win.

As dope as this start has been, it’s only been six games.

Will it last? To be blunt: probably not.

But hey, neither will good weather in Vancouver – it doesn’t mean we shouldn’t enjoy ourselves when the sun is shining.

Here are six pleasant surprises early on this season (don’t worry, I’m all out of cannabis puns):

1. No Sedins, no problem

Much of the talk coming into this season was how the Canucks would perform without the services of Henrik and Daniel Sedin for the first time in nearly two decades.

So far, so good for the Canucks, who have scored 3.67 goals per game, good for seventh-best in the NHL. They haven’t replaced their leadership, but in the short term at least, they’ve replaced the offence – and then some.

Because they’re the greatest players in franchise history, it’s easy to forget that the Sedins had already become second-line players last season. Henrik and Daniel were forced into first-line minutes last season because of lengthy injuries to Brock Boeser and Bo Horvat.

Despite their absence, the Canucks have the 13th-ranked power play in the league, and Pettersson has more than held his own in the second-line centre spot.

There’ll probably be a time when the Canucks miss them, but it hasn’t been a glaring hole yet.

Entering the season with unreasonable expectations, somehow Pettersson has surpassed even the most optimistic forecasts.

It’s early, but he’s showing every indication that he’s the real deal. Eight points in five games is a big reason why, but he’s also been responsible at both ends of the rink. Furthermore, he has breathed life into Loui Eriksson and Nikolay Goldobin.

Early indications are that he should be able to return from his concussion soon, which is good, because they’re going to need him.

Not many people were talking about Nilsson coming into this season. At least not for positive reasons, anyway.

Green has given Nilsson the opportunity to take the ball and run with it early on, allowing the 6-foot-6 Swedish netminder to stand tall for three straight wins.

#Canucks 1st ⭐️ Anders Nilsson makes one last big save to close out the win in Tampa Bay. pic.twitter.com/VrcaBoPT4i

Sam Gagner is in the AHL. Michael Del Zotto has sat out four straight games. Goldobin has been given every opportunity to succeed, and he’s shined on Pettersson’s line.

These kinds of moves – sitting veterans in favour of imperfect young players – are ones that many NHL coaches can be leery of. But for the Canucks to go somewhere, they need to transition young players into the lineup.

Green is coaching more like a guy that’s in charge of a rebuilding team this year, and it’s paying off.

Brandon Sutter and Markus Granlund have three points each, while helping the seventh-best penalty kill in the NHL.

Tim Schaller and Tyler Motte have two points each.

Antoine Roussel has been a pain in the butt to play against and already has a goal in two games since returning from injury.

Duelling celly time in Florida. Trochek's form was very very solid and in control, whereas Roussel's was not nearly as controlled BUT he added some knee kick flair. Tough to call which was better. pic.twitter.com/JFwj05WQPA

Returning in better shape, Ben Hutton has regained the confidence in the coach – despite being a healthy scratch for the first two games of the regular season. His ice time spiked in the Canucks’ last game in Pittsburgh, playing 21:17.

He scored a goal and nearly added a second one, which is nice, but what really stood out was the way he was moving with the puck.

If Hutton can return to form and play like a mobile top-four defenceman, it changes the outlook of this team considerably.