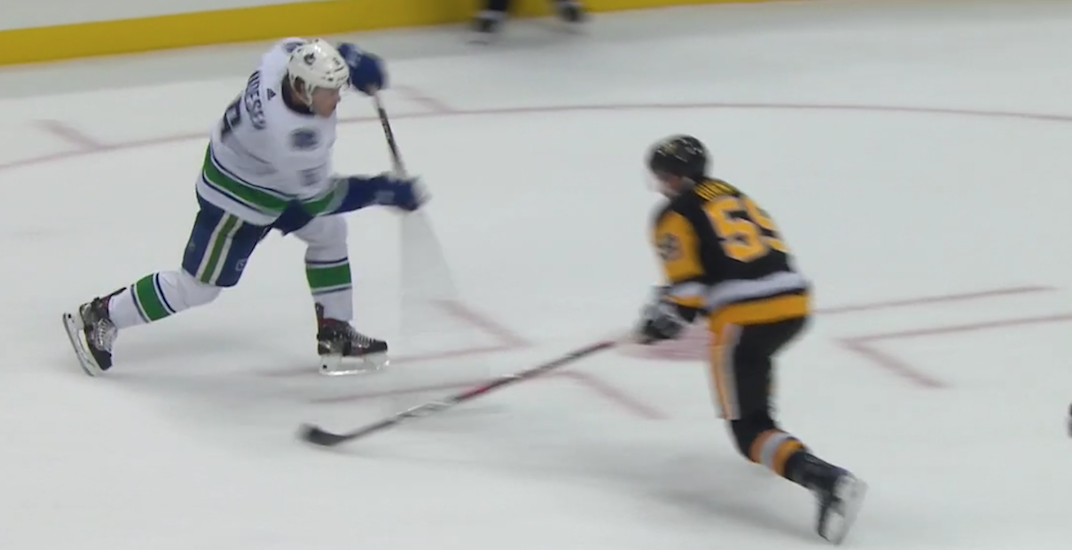 Brock Boeser’s got his groove back.

Though Matt Murray probably thought he was just lucky.

The Canucks’ second-year sniper scored the overtime winner, helping Vancouver beat the Pittsburgh Penguins 3-2 for their third-straight win on the road.

Boeser, a right-shot, skated down the left wing before ripping a wicked wrist shot by Penguins goalie Casey DeSmith.

Brock Boeser's luck against the Penguins continues as he fires in a @SUBWAYCanada overtime winner for the #Canucks. pic.twitter.com/2XA9HXSycg

“I didn’t even really aim it, I just wanted to use their forward as a screen there and I actually didn’t even know it went in until I saw Bo [Horvat] celebrating,” Boeser told reporters after the big win.

After going goalless through the preseason and first three games of the regular season, Boeser now has two goals in three games, and is on a four-game point streak.

The win marks the second improbable road win for the Canucks against a Stanley Cup contender in the last three games.

All this, and they did it without Elias Pettersson, who missed the game with a concussion.

Anders Nilsson is making the case for an early-season goalie controversy, winning his third game in a row, despite giving up a soft goal on the first shot. He made 25 saves on 27 shots and is a good bet to start the Canucks’ next game in Winnipeg on Thursday.