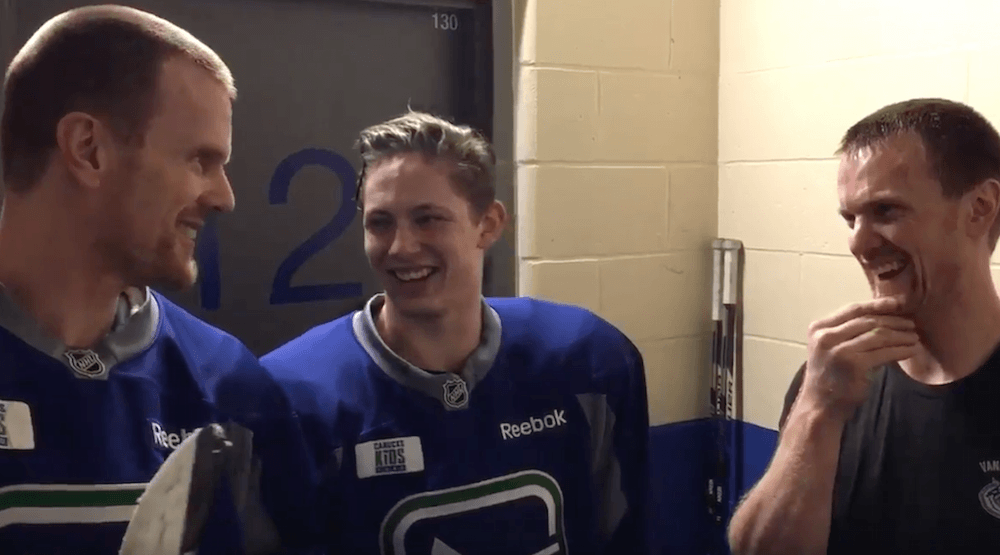 Canucks defenceman Troy Stecher is having a fine rookie season in the NHL. With 24 points (3-21-24) in 66 games, the 22-year-old from Richmond has surprised a lot of people with his strong play this season.

But at practice on Saturday morning, Stecher got a surprise of his own.

The Canucks’ leading scorer among defencemen this season participated in line rushes at right wing, alongside Henrik and Daniel Sedin.

Given that head coach Willie Desjardins has moved Alex Biega up front in recent games and the experiment has gone relatively well, it’s not inconceivable that Stecher would be given a look as a forward.

While some members of the media had their suspicions, Stecher took the bait. Hook, line, and sinker.

“I’d never played forward before. It’s a good opportunity, pretty exciting,” a bewildered Stecher said, answering a question from team reporter Derek Jory with the Sedins (who were in on the joke) by his side.

Stecher grew up watching the Sedins play for his hometown team, so he may have dreamed about playing on their line. But now, as a defenceman?

With Henrik Sedin completely unable to keep a straight face, Daniel finally let Stecher in on the prank.

“You know what day it is today, right? April Fools,” Daniel Sedin said. “So get back to playing D, eh!”

When @troystecher arrived at practice Saturday, he had been moved to forward. With the Sedins.