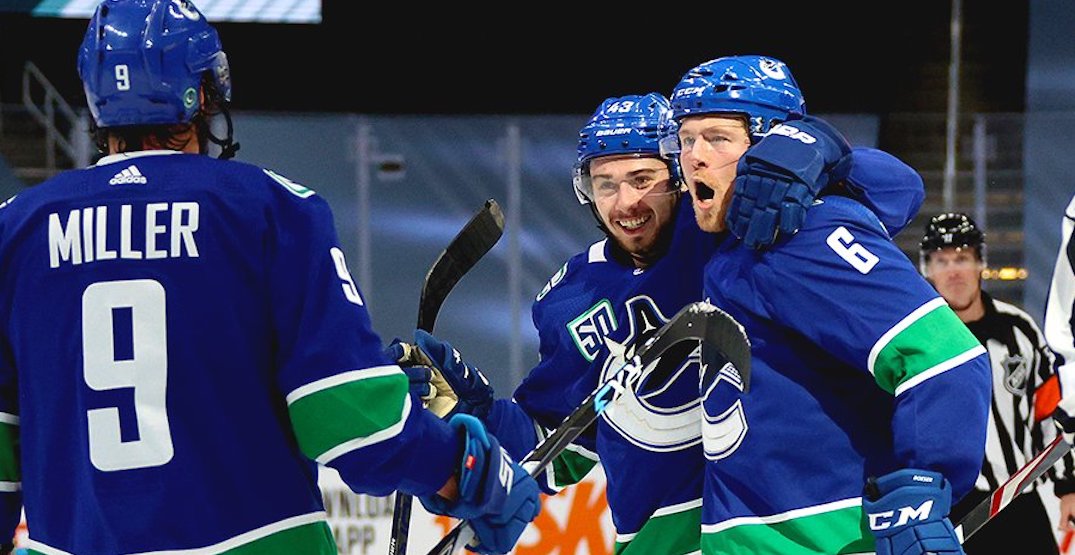 The 2019-20 season for the Vancouver Canucks was undoubtedly a success.

In the previous four seasons combined, only the Buffalo Sabres had a worse points percentage than the Canucks, who had a 127-157-44 record over that span.

Although improvement was expected, few could have predicted what the Canucks would accomplish.

The team had a 36-27-6 record when the season paused on March 12 which was good enough to qualify them for the unique 24-team playoff format, but it was what they did once in the bubble that really turned heads.

The fact that they also won an additional round (play-in series vs Minnesota), and had to take down the defending Stanley Cup champions to make it that far makes the feat even more impressive.

The question heading into the season was whether or not the Canucks could step up their game and become a playoff team, and the answer became clear.

The question now becomes, where do they go from here?

The heavy lifting of the rebuild is finished, but there is still plenty of work to be done. With a tricky cap situation to maneuver, a crucial goaltending decision looming, plenty of players on expiring contracts, and their two franchise players becoming eligible for new deals, the decisions the Canucks make now will directly determine how long their window to be a Stanley Cup contender stays open.

Here are five things the Canucks need to do to maximize their chances at winning a Stanley Cup.

The single most important thing for the Canucks to address this offseason and going forward is their defence.

Quinn Hughes is a fantastic start to that and the 20-year-old looks poised to become a Norris trophy candidate for years to come, but that’s about where the good news ends.

Alex Edler and Chris Tanev make up two of the team’s top four (arguably top three) defencemen and both are in the declining years of their careers. Edler is 34 years old and having logged heavy minutes for so many seasons, there’s a chance his play could drop off significantly in the near future.

Tanev, meanwhile, is an unrestricted free agent this summer and the Canucks will have to decide if re-signing the 30-year-old is the best decision. Tanev played well on a pairing with Hughes but has an extensive injury history and the Canucks will need to be cautious to avoid giving out contracts that will hurt them in the future.

Tyler Myers — signed last summer to a five-year deal worth $6 million annually — certainly helped shoulder some of the load on the back end but he turned 30 in February and is more likely to get worse than better as the contract ages.

There’s also a decision to be made on Troy Stecher, who is a restricted free agent and will likely look for a raise from the $2.325 million he made last year.

There are a number of ways the Canucks could address their defence.

They could prioritize re-signing Tanev in hopes that his play stays close to his current level for a few more seasons, or they could let Tanev leave in free agency, use the money elsewhere and try to let prospects like Brogan Rafferty, Jack Rathbone, and Olli Juolevi fill the void.

A more outside-the-box option would be to make a trade. The Canucks have a wealth of forward and goaltending depth, and could potentially use some of it to acquire a defenceman who is already on a reasonable contract, similar to how they acquired JT Miller on a good contract last summer.

There is risk involved in any of the options the Canucks choose, so the front office will need to do their due diligence when constructing the back end. With an abundance of talent already at both the forward and goaltending positions, the defence is what is going to make or break the Canucks.

The Canucks are already tight on the salary cap and that’s with Elias Pettersson and Quinn Hughes still on entry-level deals. Once those two sign extensions, money is going to be even harder to come by, so it’s crucial that they avoid giving out any more bad contracts in free agency.

That also includes current players with UFA status like Tanev. While there’s little doubt of how effective he is right now, a deal with a lot of term could turn into an albatross in a few years if injuries/age cause him to decline.

In recent years the Canucks have had plenty of money in free agency and they used it aggressively every summer to add new players, but that is a luxury they can no longer afford.

3. Cut costs in the bottom six

Put simply, the Canucks will not be able to afford such an expensive bottom six once the new deals for Pettersson and Hughes kick in.

The Canucks currently have four players under contract for next season that make $3 million or more and play primarily in the bottom six: Loui Eriksson ($6 million), Brandon Sutter ($4.375 million), Jay Beagle ($3 million), and Antoine Roussel ($3 million). They also have Micheal Ferland ($3.5 million) and Sven Baertschi ($3.366 million) under contract.

That’s over $23 million (just shy of 30% of the total salary cap) used on six depth forwards.

The Canucks also have Jake Virtanen, Adam Gaudette, Josh Leivo, Tyler Motte, and Zack MacEwan. All five players also spent time in the bottom six and are in need of new contracts this summer.

Whether by trade, buyout, or demotion to the AHL, the Canucks will need to find ways to cut costs in the bottom six.

In a salary cap world, every bit of savings matters. If the Canucks can find a team willing to acquire Sutter or Roussel, they could fill the roster spot with a cheaper player like MacEwan and use the extra money to improve the defence.

As much as the Canucks improved last season, they wouldn’t have made it anywhere near as far without the great goaltending they got throughout the year.

Jacob Markstrom and Thatcher Demko form an excellent tandem, but sooner or later the Canucks will need to make a decision on their long-term starter in goal — and they need to make the right decision.

Once again, either option comes with a set of risks.

Markstrom is without question the more proven goalie at this point. He’s been the Canucks starter for the past three seasons and has improved every year, posting a .918 save percentage this past season, earning team MVP honours and drawing into the Vezina Trophy conversation.

Markstrom was also great in the playoffs. He posted a .919 save percentage and his performance in Game 5 against St. Louis is likely what sparked the Canucks to win that series.

However, Markstrom is also 30 years old and his injury history is starting to look a bit concerning. Markstrom had surgery for a knee injury back in February and was injured again in the playoffs, this time a groin injury that caused him to miss the final three games.

That’s something to keep in mind when negotiating a contract with Markstrom this offseason, because groin injuries in particular can become more frequent in goaltenders as they age, and much like other positions, they often begin to see a decline in play in their thirties.

Demko, 24, is the much younger goalie and has shown — particularly in his three-game playoff stint against Vegas — that he is capable of playing at an elite level. He has a great track record in both college and the AHL, but a lack of NHL experience (he’s played just 41 games) means allowing him to become the full-time starter inherently comes with risk.

Demko doesn’t come without injury risks either, as he has already suffered two concussions in his young career. He is still a much safer long-term bet than Markstrom, mainly due to his age, but it’s something to keep in mind.

The goaltending decision doesn’t necessarily need to come this offseason, and it appears Jim Benning is keen on keeping both goalies for the 2020-21 season, but Demko will need a new contract afterwards and the expansion draft will also take place, so the Canucks will almost certainly need to make a decision by then.

It would also take a valuable chunk of cap space to re-sign Markstrom, so if the Canucks believe Demko is ready to take on the starter’s load now, it may be more beneficial to spend that money elsewhere.

5. Improve at the 3C position

Before the 2020 playoffs, it seemed to be an easy assumption that Adam Gaudette would be the Canucks’ third line centre for years to come.

That very well still may be the case, but Gaudette’s lacklustre performance in the playoffs raises some doubts as to whether he can lock down that spot on a team with Stanley Cup aspirations.

After scoring at a 45-point pace in the regular season, Gaudette was held without a point in 10 playoff games and was a healthy scratch seven times.

All this isn’t to say that Gaudette can’t be the play-driving third-line centre this team needs. Ten games is a small sample size and there’s certainly still time for the 23-year-old to make more improvements in his game, but it’s something Canucks management should keep in the back of their minds as they construct the roster going forward.

A third line that is able to drive possession and chip in offensively from time to time would be a massive boost to the Canucks. The centre position is generally viewed as the most important in hockey, and having strong depth down the middle is a pivotal part in building a Stanley Cup contender.