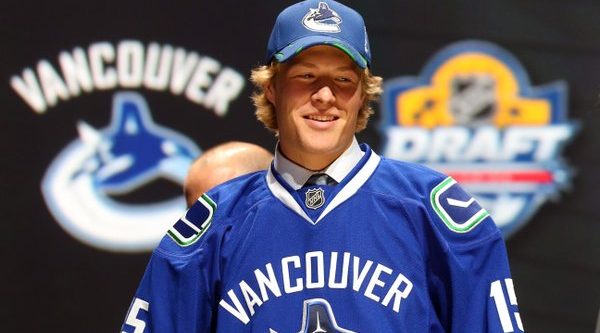 You now have a reason to watch today’s game.

The Vancouver Canucks have officially signed 2015 first round draft pick Brock Boeser to an entry-level contract.

Boeser has already made the trip from Fargo, North Dakota to St. Paul, Minnesota and will be in the lineup for the Canucks for today’s matinee game (11 am PT) against the Wild. Boeser, who wore #16 in college, will wear #6 for the Canucks.

The Burnsville, Minnesota native will get a rare opportunity to make his NHL debut in front of family and friends in his hometown.

He’s also going to get a chance to succeed right away, playing on a line with Bo Horvat and Sven Baertschi.

It’s a quick turnaround for the 20-year-old, who had his NCAA career come to an end after North Dakota lost in overtime to Boston University on Friday. He joined the Canucks at their team hotel Saturday morning in Minnesota where he signed a contract hours before his first game.

The 6-foot-1, 200-pound forward scored 34 points (16-18-34) in 32 games for North Dakota in a season where he battled injuries. He ranked fourth in the NCHC scoring race before being sidelined with a wrist injury that caused him to miss six games in total.

That earned Boeser a number of accolades. Boeser was named AHCA All-America West First Team accolades, NCHC Rookie of the Year, and was named to the NCHC First Team and All-NCHC Rookie Team as well as the NCHC Academic All-Conference Team.

Boeser’s stock has risen considerably since he was picked 23rd overall by Jim Benning nearly two years ago. The Canucks have high hopes for the youngster, who could become a dynamic goal scorer for the team one day.

That day, could be today.