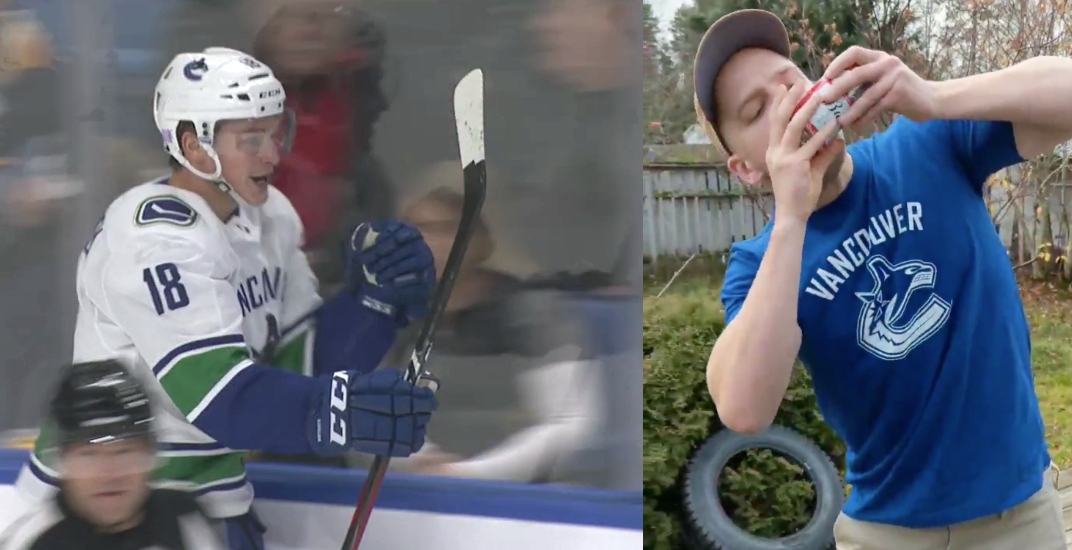 The Vancouver Canucks may have blown a two-goal lead late in Saturday’s game against the Buffalo Sabres, but many fans may have been too buzzed to care.

The Canucks gave up two goals in the final three minutes of the third period, eventually losing 4-3 in a shootout. Vancouver had chances to win the game in overtime, including a Nikolay Goldobin chance that went off the crossbar and a glorious deke by Elias Pettersson.

This would have been the goal of the year if the Canucks’ rookie hadn’t been tripped by Jeff Skinner:

Elias Pettersson with the filthy dangle to draw an overtime PP #Canucks pic.twitter.com/WPpBVXcFa5

But what really set Twitter ablaze was Jake Virtanen’s goal in the second period.

I want to see what a breakfast time #shotgunJake looks like

Yes, the focus was once again on Virtanen, who scored his seventh of the season to set up the first-ever #ShotgunJake before noon. With the Abbotsford native now on pace for 32 goals, the movement is in full force.

The Saturday matinee began at 10 am Pacific Time, with Virtanen’s goal coming at 11:43 am.

Even the official NHL Twitter account has caught on to the #ShotgunJake trend, sending out this tweet after Virtanen lit the lamp on this backhand shot.

You know what time it is… pic.twitter.com/q16kcmFvjD

The clock had not yet struck noon, but Canucks fans everywhere were armed and ready for the occasion. Unfortunately, Twitter wasn’t, as many of the videos initially weren’t playable for others to watch.

Twitter has since fixed the bug, allowing us to see these glorious morning shotguns:

bout to shotgun a coffee here#ShotgunJake