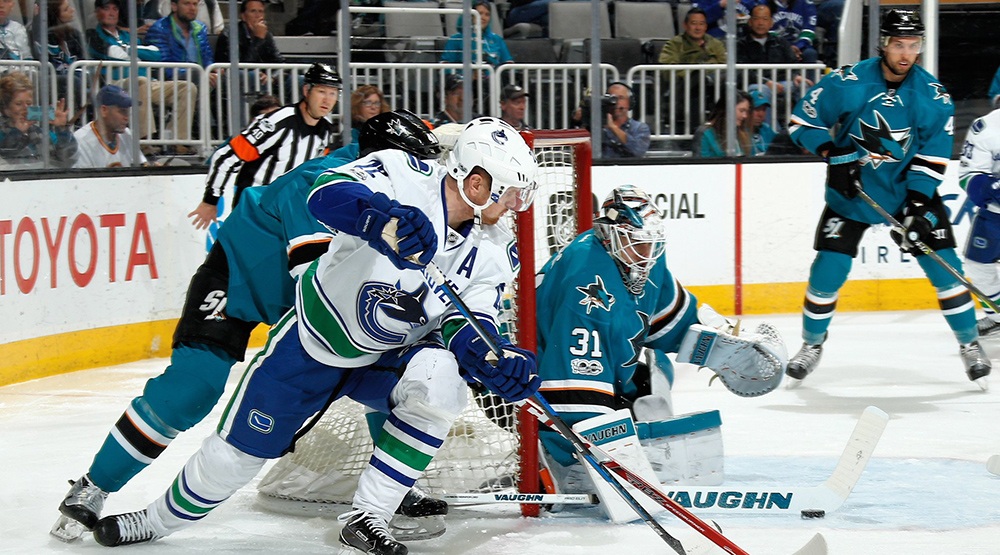 All you can do at this point is count down to the end.

Tuesday night was amazing for hockey. Boston, Toronto, Ottawa, Tampa Bay, Calgary, Nashville – all were fighting for their playoff lives or playoff positioning.

Not Vancouver, though. As you know, the only thing on the line for them is draft odds.

If you watched the Canucks game start to finish without falling asleep or changing the channel, you really should be rewarded. I mean Trevor Linden should come to your house and personally present the ten of you with signed jerseys.

This game is like sex, 30 seconds of excitement then Zzzzzzzz

Anyway, I know I’m not doing much to sell the game here. The SixPack though – it’s worth your time.

You know it’s a good pass when Tanev gets a goal.

It really was a good pass. Look.

Future of the franchise, Brock Boeser, helping Tanev score his second goal of the season right there.

That’s a heroic effort, you have to admit.

Three goals against doesn’t look good on the backup – until you look at the goals and realize he didn’t have a chance on a single one.

First – can’t see it from this angle, but Sbisa deflected Labanc’s shot in.

Second – Ward banked his shot in off the post.

Now, with a lot of people wanting the Canucks to go with a Markstrom-Bachman combo next season, you hope this game doesn’t scare Willie into giving Miller both weekend starts against the Oilers.

Let’s see him play against the high-flying Oilers offence. It’s the only way we’ll know if he’s ready.

On a 2-on-1 during the first period, when Hank passed up the obvious play to Goldy, instead attempting to drop it to Sbisa, I thought he hated Goldy or something.

As I wondered what Hank was up to, one Twitter follower sent me this hypothesis.

Ridiculous, I thought. Then, moments later…

Guess not. No one else caught on.

4. Getting through to Goldy

By now you know Goldobin was scratched Saturday, and you’ve probably also read and heard Willie and Sutter’s comments about him needing to play harder (he needs balls and guts, as Sutter put it).

Sutter on Goldobin: "Get the puck to go into corners & hard areas. To do that, you have to have grit and balls and he has to find that."

If you’re one of the many in Vancouver thinking Willie might be pushing the right buttons to get the best out of Goldobin, you might want to think twice.

Paul Gackle from the San Jose Mercury News covered Goldobin extensively with the Sharks and their minor league affiliate the Barracuda.

Gackle was on Kurtenblog Radio Saturday, and they asked him if San Jose tried the tough love approach with Goldobin.

“They did try tough love. There was a couple of times where he was benched at key moments of games. Having said that, I do think that he’s a guy whose confidence can be kind of fragile, and I think he’s a guy who responds better to patting him on the back than slapping him on the butt.

There’s a different approach you have to take to each guy, and I think with a guy like Goldobin, because he has that reputation for being flashy and cocky, you think, OK here’s a guy we have to bring the tough love to and be hard on, but he doesn’t necessarily react very well to that.

Now, if Goldy starts playing well, you might want to think twice before crediting Willie for the turnaround with the scratch.

Because it might’ve been Miller’s talk at centre ice (from Ben Kuzma’s article), where Miller told Goldy he’s a good player, that propped his confidence.

Sure, he missed both times, but I’m pretty sure no one’s found openings like that with the twins since Vrbata.

During the second intermission, Murph asked Goldy what he’s trying to prove to the team.

“Just want to show I’m a top-six forward, I can play power play, and really, (I’m) going to bring wins and goals.”

6. Canucks fans really are fed up

When writing, sometimes you know an article you’re working on is going to cause an uproar.

Those times, the second you hit publish, you brace yourself for the backlash.

I expected today to be such a day when I tweeted out my article about Canucks management failing to deliver on promises.

Thing is, the reactions were quite tame.

There were those who disagreed, but their arguments … let’s just say these guys shouldn’t be lawyers.

No… that’s not right.

You want the Canucks to follow the Edmonton model… inept management for nine years? Weak plan.

@omarcanuck What if this team stayed healthy all freakin year? Markstrom is still no better than Lack and got injured during skills game

Do people really think the team would be that much better if they’d stayed healthy? I doubt many do.

Anyway, the fact that most readers agreed with the article and weren’t trying to murder me says a lot about where fans are at with the team right now.

One reader wanted me to go even harder.

how do you rip Benning w/out mentioning he’s blown our 2 top 10 picks – the most critical action in the ‘rebuild’? https://t.co/s1fSqqqwB5

I didn’t mention the picks because I didn’t want to be too one-sided in the article, by the way. Hard to argue with Dig’s points though.

@omarcanuck sure but their stated direction was ‘rebuild on fly’. they blew the ‘fly’ part and blew the ‘rebuild’ w those two bad picks

@omarcanuck this team has Nylander or Ehlers and Tkachuk, it would’ve actually rebuilt on the fly! its hilarious what blowing those picks cost Benning

True – rebuilding on the fly could have been done a lot better, and the team could be semi-competitive right now.

Rake Virtanen might be better, though. Just look at that side-by-side shot.

Note: Thanks to Ryan Biech for his tireless work on the gifs, even in the painful parts of the season.