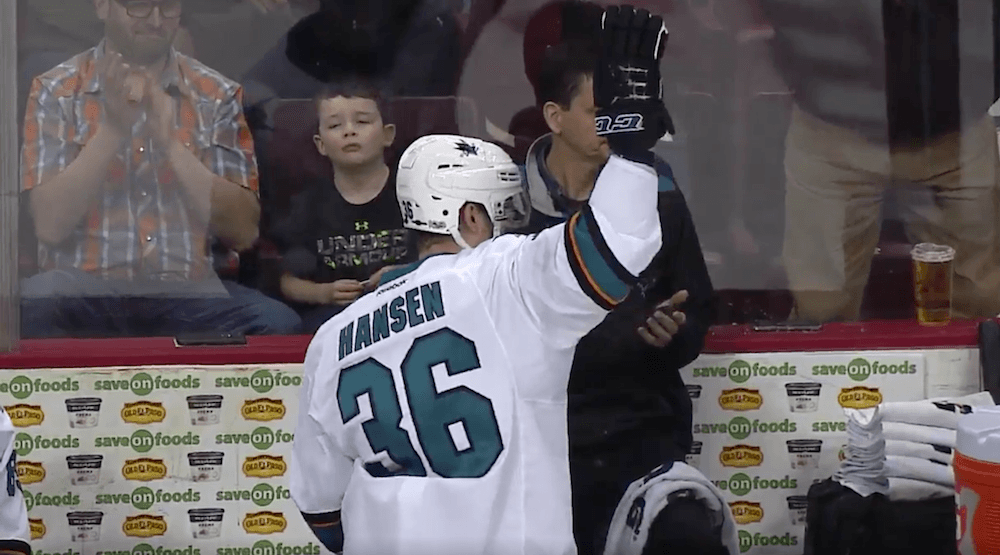 Let’s get one thing straight. Canucks fans might be laughing or pulling their hair out with every bad play the team makes right now, but that doesn’t mean they’re not supporting the rebuild.

It means they haven’t checked out, they’re watching, they’re able to make jokes about how bad their team is.

It means they’re still engaged while the team loses, like they did by a 3-1 score to the Sharks Sunday.

That doesn’t mean they’re going to support every move the Canucks make.

Take the Megna contract extension announced just before the game, for example. To put it lightly – they didn’t take it well.

Stanch pretty much summarized the feelings of Canucks fans here:

Not sure about you, but I can’t wait to hear Benning talk about how Megna gets in on the forecheck and how he competes.

You know what they say – if you get enough players like that, you’ll have a bunch of guys who get in on the forecheck and compete.

(So pretty much what the Canucks are now)

Anyway, stuff happened in the game, and it really doesn’t matter. They lost, so they’re only one point up on New Jersey for 28th in the league, and two points ahead of Arizona for 29th.

Meaning if you’re a card carrying member of Tank Nation, you can go ahead with that happy dance now.

Something potentially bad did happen for the Canucks during the game.

Near the end of the first, Chaput stepped up on Joe Thornton, causing him to leave the game in obvious pain.

If you’re wondering why that matters, it’s because Vancouver got a fourth round draft pick from San Jose in the Hansen trade, and if they win the Cup, it turns into a first rounder.

2. Were you hoping to see Goldobin play?

Apparently Trevor Linden was too. Linden was on TSN 1040 with Jeff Paterson during the second intermission of the game, and JPat asked about the tough love approach Willie’s taking towards Goldy.

I think the way you handle young players early on is important and I’m sure we’ll see him back in there next game.

It’s been up and down for him. He’s very skilled and he brings an element we need, having said that the coach makes the lineup card and he knows what he wants and expects and that’s in his hands.”

Guess Linden’s given up on discussing lineup decisions with his coach?

So… Willie’s probably feeling about as secure in his job as Tiger Woods’ caddie right now.

Just me or is Jake Virtanen’s ‘stache the most noticeable thing in this picture?

Jake Virtanen talks to the media after Saturday’s Comets 5-3 win over Rochester. pic.twitter.com/hbUi6qYYnS

Look, you just don’t mess with a guy sporting that kind of ‘stache. Even if he is 20 pounds lighter than before.

The Canucks should sign one of their Megnas before every Canucks game (and they have plenty) because it sure makes Sixpacking easier.

Check out some of the Twitter reactions to Vancouver’s announcement of the deal.

Good move by the Canucks to announce the Megna signing today, if they did it yesterday many would think it was a prank

Canucks must be hoping Willie’s new team offers them a 1st round pick for Megna.

Huge for the Canucks to lock Jayson Megna up, finally providing the Sedins and the top unit power play with some much needed continuity

Brendan for the win:

JPat had an amazing way of basically asking Linden if there’s any upside to Megna in this exchange.

JPat: “Do you see offensive upside there? The wheels are undeniable. He skates at an NHL level, nobody would say he doesn’t, but he’s gone these long stretches, he’s had power play time and he hasn’t been able to produce. He’s not alone on your team, but do you see offense there?”

“I think obviously when a team struggles people look to point fingers and obviously he’s been a lightning rod with many of your folks.

At the end of the day he’s a guy who’s playing an expanded role due to a lot of injuries, so as far as what he brings to the table, we’re happy with him.”

If so, let’s get one thing straight.

The reason Megna’s got so much attention – AKA been a lightning rod – this season (notice that he’s got a lot more space than Skille or Chaput) is because he’s played stretches of the season with the Sedins and on the first unit power play.

Someone better tell Linden he can’t blame the media for casting an AHLer as a top-six scorer.

That’s another one of those “lineup decisions” he can roast his coach for.

5. What did Miller say to Hansen that made him laugh?

Hansen had a great chance to score and was hauled down by Tryamkin in the first period.

Question is, what did Miller say to him that had them smiling so much?

These are good guesses.

@omarcanuck “Can you believe we re-signed Megna?”

@Canucks “LOL another year with Jayson eh?”
‘Ha yeah right, I’m out of here next summer’

Here’s the video tribute the Canucks gave Hansen during the first period:

6. Be better than Leafs and Flames fans

Let’s not do this, Canucks fans.

I’m talking about making life miserable for the team’s all-time best players in their final years.

With the Sedins reaching the end of their careers, we are sure to hear the argument that they’re holding back the rebuild. Truth is, they are, and there’s no way to argue against it.

What’s hard to quantify is how much the young guys will learn from them. I’m not going to sit here and argue that point – you’ll hear from many others how it’s invaluable and whatever else, but who knows.

Connor McDavid and Austin Mathews haven’t had Sedin-like veterans in their dressing rooms, and they’re turning out just fine.

Here’s the thing – you can argue all you want about the pros and cons of keeping the Sedins around, and I’m sure you will – but the Canucks have them under contract for one more year.

Everyone hopes they’ll bounce back, that this is just a down season. With a new coach, and without a steady diet of linemates that helped them as much as the Burrard Bridge construction has helped your commute, they have a decent chance of it.

But if it doesn’t happen, are you going really going to run them out of town?

Hopefully they’ve earned more respect from this city than that.

The Linden-Benning regime has been tone-deaf to what fans have been asking for since they arrived. It’s simple really. Actually, it always was.

Now that they failed at the re-tool, Linden’s finally internalized the message he should’ve been giving all along.

“We’ve got some work to do. Obviously we want to have a good draft and add to our prospect pool and continue to develop some of these young players who are going to be turning pro in the next one or two years.

There’s definitely going to be some bumps in the road ahead of us. We just have to stick with it, stick with the plan, keep building. We’ve got no choice.”

Better late than never? I’m not so sure.

Hopefully you’ll like this response to my tweet saying Linden is looking to change things up when he goes to this summer’s draft lottery (meaning changing the lucky hockey card he carries or whatever).

Also, just got this great news from Rob the Guy out of the Canucks’ dressing room: Megna just got engaged.

Great news! Sure hope he doesn’t read this SixPack!!