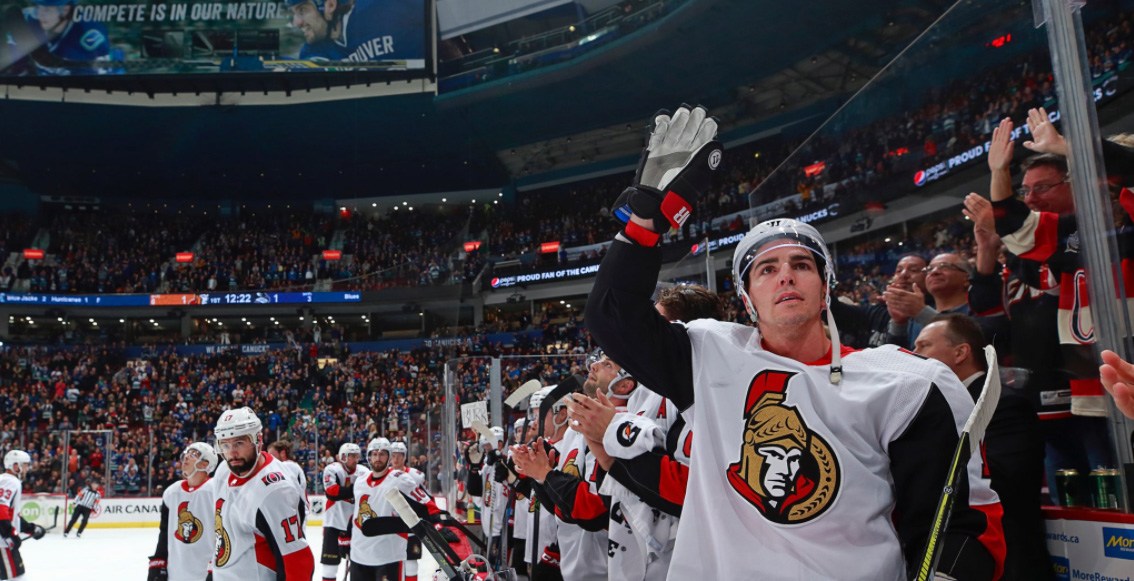 Burrows did it again.

His team was down 2-1 going into the third period.

Sure, he didn’t score the winner. He didn’t even say “Win Da Turd” (he went with the more civilized “We’re fighting for a win and we’ve got to come back in the third”), but he did call it.

So if you were looking for a vintage night from one of your favourite Canucks in his return home with the Senators – well, take what you can get, I guess.

Following his not-so-bold intermission call, the Senators came back to force overtime eventually winning 3-2 in the shootout.

And what about the quality of the game? Considering the situation, it wasn’t too bad.

The Senators – one of the most structured defensive teams – just came to town without the one guy who makes them worth watching, while on the other side you had a team that was almost not worth watching at all last season.

Look, it wasn’t Oilers-Canucks from this past Saturday (which was more exciting than 95 percent of last season’s games). It was slow and plodding for stretches, but from about halfway through the third period, the game became pretty exciting.

After last season, you take it. Hey, it doesn’t take much to improve on that year-long torturous cause of and cure for insomnia.

For most fans, this game wasn’t about the Canucks at all. Well, not the current ones anyway.

It was all about the guy on the other team who’d spent 12 years in Vancouver, and spent many of them as the heart and soul and driving force of the team.

The tribute video wasn’t long enough for some, still, fans were on their feet as soon as it began, and they roared louder and louder as it went on.

You can see that video yourself here:

ClayCanuck caught a video of Burrows coming out as 2nd star too:

Looking back at Vancouver’s connection with 14, maybe the best part of it is only Canucks fans get it.

Talk to your hockey friends in other cities, they’ll say he’s a pest, a dirty player. They’ll remember him biting fingers and say clueless things about how the Sedins carried him.

Let them. It’s their problem and their loss.

They didn’t know about his connection with Luc Bourdon. They, unlike almost every hockey fan here, don’t have a story about how they met him and he was friendlier and nicer than they could have imagined.

They knew the Sedins were two of the best players in the world, and yeah, they carried Burrows, but what the outsiders couldn’t see was how he pushed and carried them on many nights.

His energy, his pride, his incessant determination – that’s what we saw night in, night out.

And if others are too dumb to see it? Their problem.

Burrows actually should have had a goal early in the game, but after allowing a complete softy to put the Canucks in a 1-0 hole, Markstrom shut the door.

Vancouver was outplayed for the most part – shot attempts were 48-37 Ottawa and shots were 34-19 by the end of it – yet they allowed only 2 goals.

Did Markstrom earn himself another start or will Anders Nilsson get a start on Thursday. If I’m forced to call it, I’d say Nilsson get’s the next one.

Did you notice for the second straight game, Green matched his Sutter line against the opponent’s top line?

Again, the line was torched in the shot-attempt differential (possession) battle – Sutter: minus-9, Granlund: minus-9, Dorsett minus-7 (against the Oilers they were about -17 each) – but once again, they didn’t give up a point.

Thing is, if they keep playing most of their shifts in their own end, it’s only a matter of time until they’re scored on.

Something to keep watching, that’s all.

The Sedins set up both Vancouver’s regulation goals. Here’s the play that earned Henrik the SixPack Superstar nod for Tuesday’s game:

Catch that Gretzky-like play behind the net?

In many ways, this was a vintage Sedin performance. There were many games during their heyday when they didn’t dominate the entire night, instead emerging just long enough to assist one or two goals, quietly adding to their point totals, and move on to the next.

This was one of those performances – they set up Tanev and later Vanek, and ended with three points between them.

With Brock Boeser awaiting his 2017-18 season debut, the question is who should be scratched for him on Thursday?

Halfway through the game, Thomas Vanek played himself off the Sedins’ line with his lackadaisical efforts, as Green switched him to the Horvat line and Eriksson to the Sedins. At that point a Vanek scratch for Thursday looked like a sure thing.

Then Vanek scored his goal, so that call becomes tougher.

Doubt Green sits his favourite shut down centre. Sutter plays more PK time than any other forward, so he’s probably not going anywhere.

Dorsett. So much died on his stick tonight.

Could be, but considering the way Green hard matched Dorsett-Sutter-Granlund against the top lines in the first two games, I have a hard time seeing him change that.

So who does that leave? To me, it’s between Virtanen and Vanek, with an outside chance of Eriksson being scratched. Oh and Gagner too – almost forgot him, right?

After scratching our heads over Willie’s overtime line choices for three years, I couldn’t wait to see what Green would do.

Would he play Virtanen – the team’s fastest forward – at 3-on-3? Would Vanek and Gagner – two free agents brought in for their offence and power play abilities – get a shot?

Would he split the Sedins as Willie had started doing?

Here are the offensive pairs Vancouver went with:

On defence, it was Tanev, Edler and Del Zotto.

Funny enough, they didn’t look all that bad. Even less predictable – the best chance came from the Sutter-Granlund-Tanev group right at the start of OT, followed by a glorious Sedin rush right at the end.

The Canucks didn’t get the extra point, but they sure got close to it.

Of course, the most poetic finish would’ve been an overtime or shootout goal by Burrows, propelling the Senators to the win. But, as Canucks fans know, that wouldn’t have been right either.

Burrows saved his magic for the biggest moments, the most pressure packed situations – that’s when he was at his best. It was nice to see him back in Vancouver one more time, though.

Note: Thanks to Ryan “BiechBody” Biech for donating the gifs in this post