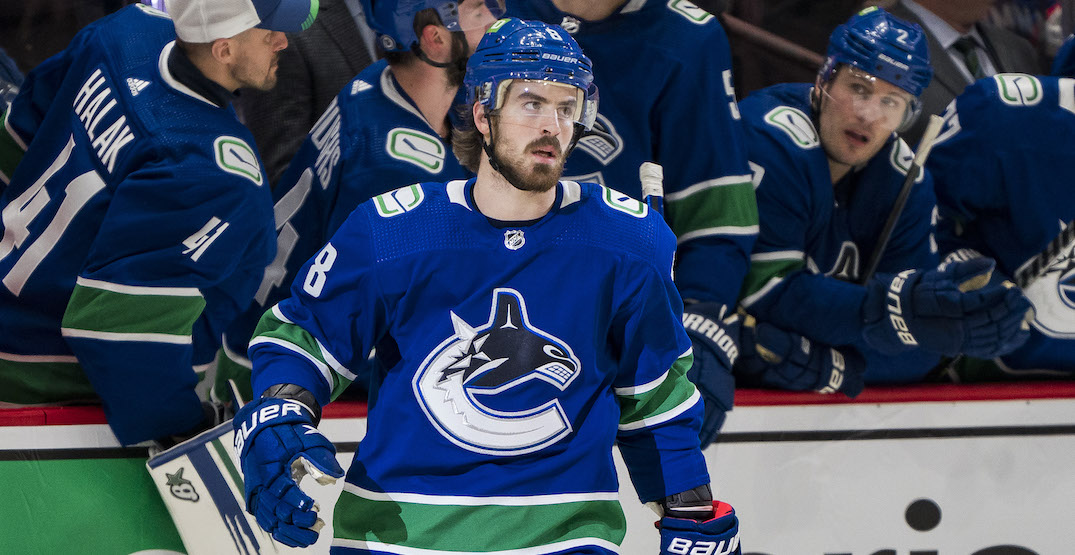 The Vancouver Canucks may need to brush a significant amount of dust off their home blue uniforms before their next game at Rogers Arena.

That’s because they won’t be playing tomorrow, as scheduled, the NHL has announced.

The Canucks were supposed to play the Ottawa Senators on Saturday night, with Rogers Arena limited to 50% capacity. It was to be Vancouver’s first home game since December 14.

A January 15 game between the Senators and Jets, scheduled to be played in Winnipeg, is also being postponed. Both games are being postponed due to “current attendance restrictions,” according to NHL public relations.

In their own media release, the Canucks said the decision was made “proactively” after consultation with the NHL and BC Provincial Health Officer Dr. Bonnie Henry.

The plan is to reschedule the game for later in the season when “restrictions may be eased or lifted.”

“COVID-19 cases continue to increase at a rapid rate, and we all need to adjust and be flexible as the pandemic evolves,” said Michael Doyle, President, Canucks Sports and Entertainment, Business Operations. “We hoped to play tomorrow, but we are at an important point of the pandemic, and given the size of the event, everyone involved believe this is the right decision. We thank everyone for their patience and understanding.”

This is the sixth home game postponed for the Canucks since the Omicron variant began spreading in North America last month. They also had one road game postponed in San Jose on December 21.

Fans with tickets to postponed games are being told to hang on to their tickets until a new date is announced. The Canucks had already begun the process of voiding tickets for tomorrow’s game for all single-game ticket buyers.

All single-game tickets to Saturday’s #Canucks vs #Sens game at Rogers Arena have been voided due to the 50% capacity limit. The team has begun emailing ticket holders. pic.twitter.com/xPTRLZSQZG

It’s been a bizarre last month for the Canucks, who have played just three games in 22 days. They’re hardly alone, particularly in Canada, where the NHL has rescheduled many games to later in the season due to capacity restrictions.

There were supposed to be four games played in Canada tomorrow night, but games in Montreal, Winnipeg, Edmonton, and Vancouver have all been postponed.

So far, no American teams have had their home attendance restricted by local governments.

Canucks players had been looking forward to playing in front of their fans again.

“We can’t wait. Obviously, it’s been tough [for everyone] in the city and in the province as far as what’s going on here… shutdowns and restrictions, all that sort of thing,” Luke Schenn said after practice on Thursday.

The Canucks will now prepare for an extremely difficult five-game eastern road trip beginning on Tuesday, with stops in Florida, Tampa Bay, Carolina, Washington, and Nashville.