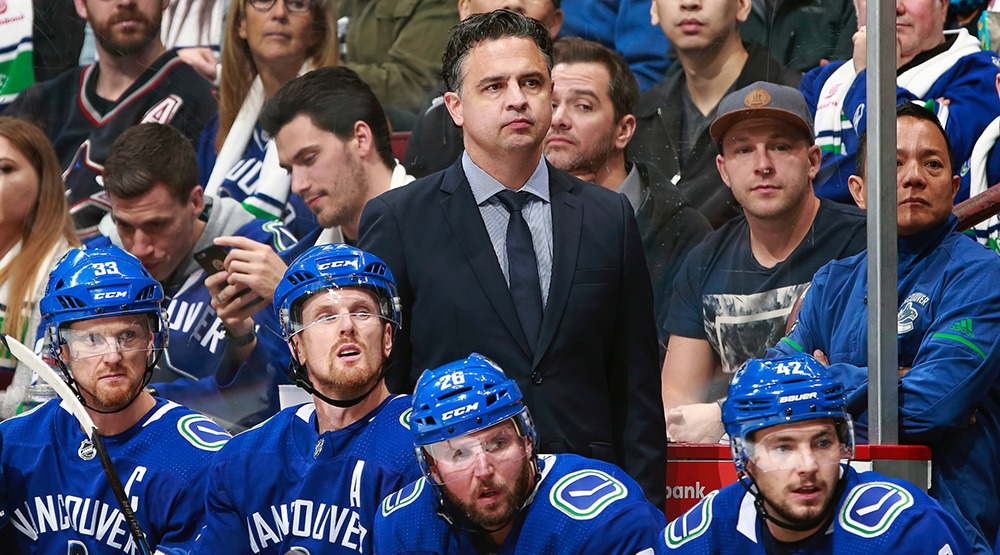 What a strange trip it’s been.

And now, after 40 games, what do we make of this team?

Hard to believe, but yes, this team is worse than last year’s team.

At the midway mark, anyway. If this year’s edition gets the mumps in the second half, maybe we can make a fair comparison at the end of the year.

After 40 games last year, the Canucks had a 19-18-3 record, good for 41 points in the standings. They were in the midst of their fifth win in six games.

Are they more entertaining? Sure. Does Brock Boeser give you a reason to watch? Absolutely.

But they’ve won just two of their last 12 games.

Injuries are a big part of it, with the team going into the tank immediately after Bo Horvat’s injury. But Horvat, who is scheduled to return sometime in the back half of this month, likely won’t be able to save this bunch on his own.

With a reasonably healthy defence, they’ve been unable to keep the puck out of their net.

2. Their goaltending has been dreadful

The Canucks won their 40th game of last season, 3-0 over the Arizona Coyotes, with Ryan Miller picking up the shutout.

Miller had a shutout in the 40th Canucks game of this season too, except he was playing for the other team.

The current state of things after 20 mins. #Ducks lead the #Canucks 2-0. pic.twitter.com/KRZ4a2PUXV

The former Vezina winner is 37 years old and it was time to move on, but it’s clear the team isn’t getting the same level of goaltending they’ve enjoyed for the past three seasons.

Giving up 3.25 goals per game, they give up the fifth-most goals of any NHL team. This is despite giving up 31.7 shots against per game – putting them mid-pack in the league (17th highest).

When they said Nilsson and Markstrom would be challenging each other for position, I didn't think it was "backup".

In the shadows of the halfway mark, Jacob Markstrom has a .906 save percentage. Anders Nilsson sits at .900. That has Vancouver’s netminders ranked 39th and 44th out of the 56 goalies in the league with 10+ games played.

3. Good/bad on the back end

Let’s start with the good.

Derrick Pouliot has been a fine addition. Showing a rare ability to effectively play both the left and right side, Pouliot is leading Canucks defencemen in Corsi-For percentage – an indication that he’s played a reliable two-way game.

He’s also leading all Vancouver blueliners in power play points with five, while playing primarily on the team’s second unit.

Also good? Chris Tanev. Problem is, he’s hurt too much. Only Alex Biega (21) has played fewer games on the back end than Tanev (26).

Michael Del Zotto leads the defence in points with 12. But he’s last on the team in plus/minus (an imperfect stat) at -17. Only Erik Gudbranson has a worse Corsi-For percentage (45.01) among Canucks d-men.

Neither is Edler’s offensive production, particularly on the power play.

Nobody has played with Vancouver’s top unit more than Edler, yet he’s only put up two power play points in 28 games.

4. The power play has been damn good

Since putting Brock Boeser on the top power play unit, alongside the Sedins, Vancouver has the second-best power play percentage (27.7%) in the league.

Boeser is not the guy you want to leave open on the power play.

Boeser, with his lethal shot, has been the key of course.

Watching the Canucks’ power play, something that used to be a form of torture, is now a treat to watch.

I think I speak for everyone that watches the Canucks on a regular basis in saying: thank god for Brock Boeser.

He isn’t just the team’s top scorer, he’s their top scorer by a lot. With 38 points, he’s scoring at better than a point-per-game clip and is 10 ahead of the next closest on the team. His 21 goals are nearly double Thomas Vanek (12), who ranks second.

With back-to-back Rookie of the Month honours, he’s the favourite to win the Calder Trophy at this point. He should also be Vancouver’s lone representative at the All-Star Game.

6. Their penalty killing has been abysmal

It’s too bad Boeser can’t kill penalties too, because the Canucks could sure use the help.

Difference between a good PK and not? Markstrom makes a key save on shot from the slot. #Canucks

Part of the problem is goaltending, but it’s more than that.

Jim Benning made it a priority to acquire players to help the power play in the offseason, but unfortunately he appears to have done it at the expense of the PK.

Penalty killing forwards Brandon Sutter, Bo Horvat, and Derek Dorsett have missed significant time due to injury. So have their top PK d-men in Tanev and Edler.

But the penalty kill sucking isn’t a new phenomenon. It wasn’t good after the first month of the season, and it wasn’t good last year either.

Travis Green has the Canucks playing more aggressive and more entertaining than they were in the past.

Yet they’re 27th in the league in goals per game.

Bad goaltending and injuries will make any coach look poor, so perhaps we need to give Green more time.

With a healthy lineup and average goaltending, this team was one of the pleasant surprises of the NHL to start the season.

While he didn’t break the bank for any of them like he did with Loui Eriksson the year prior, none have really done much other than to provide depth – despite some nice starts for some of them.

Del Zotto (2 x $3M) was once leading the team in ice time, but is now a healthy scratch candidate.

I mean, you can probably sit Del Zotto a game and not make Hutton take all the scratches

The other guys – Alexander Burmistrov and Patrick Wiercioch – now call the KHL and AHL home, respectively.

The free agent signing that did work out, was the one they made on September 1. Vanek has exceeded expectations, giving the team the goal scorer they badly needed. He’s also the biggest reason why the second unit power play clicks.

The Sedins are still two of the team’s most productive players, but they’re clearly not front-line players anymore.

They’ve missed Sutter, even if he is no better than a bottom-six forward.

Eriksson has 13 points in 28 games and still isn’t close to be deserving of his $6 million salary.

Horvat (20 points in 28 games) and Sven Baertschi (18 in 30) had taken the next step in their careers before getting hurt.

Markus Granlund (10 points in 39 games) has taken a step back.

Dorsett was the hero we needed for a month before being forced to retire.

Troy Stecher has been pretty good again this year and should play more too. He only sees 16:04 per game, and doesn’t play much on special teams.

Is Nikolay Goldobin an NHL player? Can Brendan Gaunce provide some offence?

As with most teams that sit in 27th place at this point in the season, with the Canucks, there are more questions than answers.