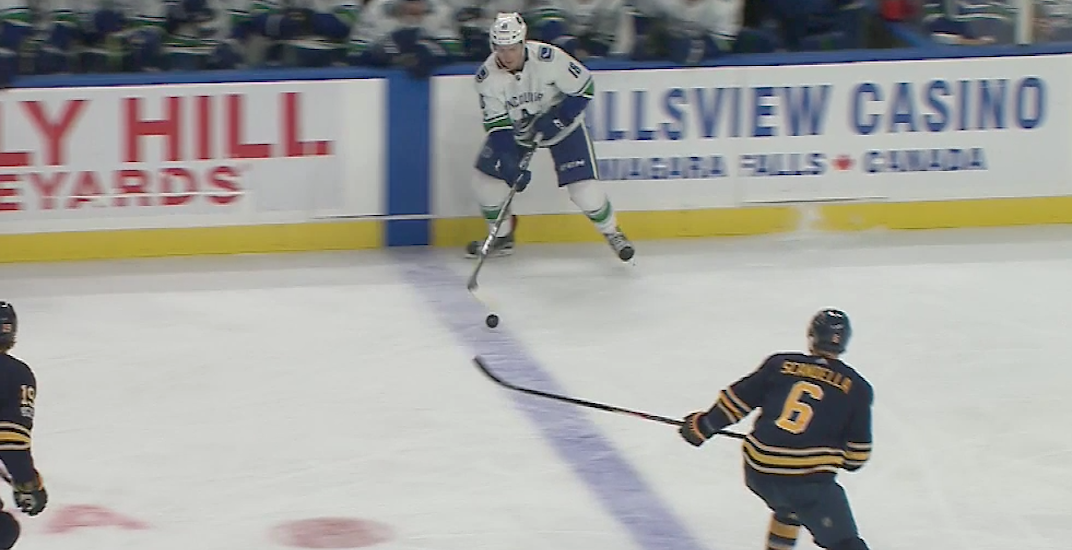 We thought we’d seen this movie before.

Terrible defensive coverage. Giving up a goal on the first shot. Markstrom lets in a stinker.

Except this time, the story had a different ending.

Despite a nightmarish start to the game, the Canucks put their work boots on and grinded out a 4-2 win in Buffalo on Friday. It was their most complete game of the season.

Sure, it came against a Sabres team that came into the game with a 1-4-2 record.

That’s a reason to crack open a Friday night SixPack.

1. Did he have control or not?

With score tied 2-2 8:10 into the second period, the Canucks appeared to get the go-ahead goal.

Jake Virtanen made a great play, knocking the puck out of midair before delaying, passing through Jordan Nolan’s skates to find Henrik Sedin. Henrik did what Henrik does, sending a beautiful backhand pass to his brother who scored to make the score 3-2.

Virtanen entered the zone before the puck, which is offside unless he has control.

The Sabres challenged the call, which is when four officials took a few minutes to figure out what the definition of control really is.

Here’s how most of Canucks nation felt during that delay:

The NHL hates Vancouver…this will be disallowed

And here’s how everyone reacted when the call on the ice stood, and the goal counted:

Holy crap, I cannot believe it was allowed!

Hot damn, a break for the Canucks.

I was shocked the call stood. Virtanen calmly batted the puck out of the air, and certainly knew what he was doing, but the puck was barely on his stick. Can you have control of the puck without touching it?

Here’s the explanation of the call from NHL:

At 8:10 of the second period in the Canucks/Sabres game, Buffalo requested a Coach’s Challenge to determine whether Vancouver was off-side prior to Daniel Sedin’s goal.

After reviewing all available replays and consulting with the Linesman, NHL Hockey Operations staff confirmed that Vancouver’s Jake Virtanen had possession and control of the puck as he entered the attacking zone prior to the goal. According to Rule 83.1, “a player actually controlling the puck who shall cross the line ahead of the puck shall not be considered ‘off-side,’ provided he had possession and control of the puck prior to his skates crossing the blue line.”

Since the Coach’s Challenge did not result in the original call being overturned, the Buffalo Sabres are assessed a minor penalty for delaying the game.

When asked if he thought he had control by Sportsnet’s Dan Murphy during the second intermission, Virtanen rambled about a few things before saying “we’ll take those any day.”

After 20 minutes, it appeared that goaltending was going to be the story of this game.

The Canucks outshot Buffalo 17-5 in the first period, yet trailed 2-1.

Sabres goalie Chad Johnson was outstanding, while Markstrom began by letting in the first shot on goal for the second time this season.

The goal was reminiscent of a few let in against the Bruins. Vancouver’s defence crumbled, leaving their goalie out to dry. Can’t fault Markstrom on that one.

3 straight games now an opponent has simply skated through a #Canucks Dman: Karlsson on Gudbranson, Pastrnak on MDZ & Eichel on Hutton

Ben Hutton got danced by Jack Eichel on the second Sabres goal, but this is one that Markstrom has to stop.

That was the moment when everyone wondered if the Canucks had a 2A/2B situation in net, not a 1A/1B one.

Credit to Markstrom, he shut the door after that.

He deserves to start the next game Sunday in Detroit.

3. Why aren’t the Sedins playing more?

It feels weird to be in a world where Henrik and Daniel Sedin are getting under 13 minutes of ice time per game, but here we are. That’s been the case the past three games, and Friday’s game was no different.

This is despite the fact that the Canucks had a huge edge in power play time. 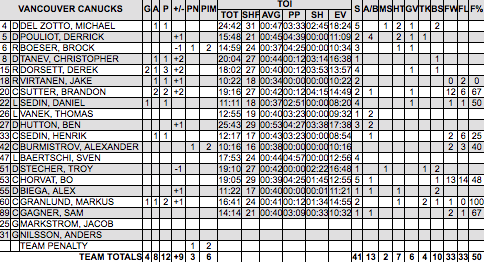 No Canucks players had less ice time at even strength tonight than Henrik and Daniel. That just doesn’t feel right.

The Sedins were skating well, even before the goal they created. Perhaps the speedy Virtanen helped in that regard?

4. Virtanen fit in well with the twins

Jake Virtanen got the assignment to play with the Sedins tonight. Apparently we’re still referring to that as a promotion to the first line…

Not anymore, but they certainly deserved more ice time.

Virtanen was a great fit with the Sedins for one game, and that’s something that has real potential.

#Canucks Sutter: 'we know we don't have any superstars or 100 point guys — unless Dorse keeps up this pace'

Derek Dorsett, this is your moment.

Dorsett scored a shorthanded goal, before netting an empty netter to ice it. He added an assist too.

Watch him fight for the loose puck, getting a shot on net, before Granlund potted the rebound.

How hilarious was Tanev’s slap shot by the way?

Dorsett played on the team’s shutdown line, and had a decent (-1) Corsi rating in 18:02 of ice time.

HE LEADS THE TEAM IN GOALS AND POINTS after seven games.

Is this real life?

This is a player that fans and media wondered if he would be an everyday player in Green’s lineup.

The way Dorsett needs to play is physically demanding, and this type of ice time likely isn’t sustainable, but darned if he isn’t making people eat their words at times this season. Including yours truly.

Whatever you think about Dorsett, doesn't make sense to play him as much as #Canucks have. On pace for 18 mins tonight. Hard for his style.

Derek Dorsett, not only were you tonight’s first star in the arena – more importantly – you are tonight’s SixPack Superstar.

*Thanks to Ryan Biech for providing all the gifs in this article.