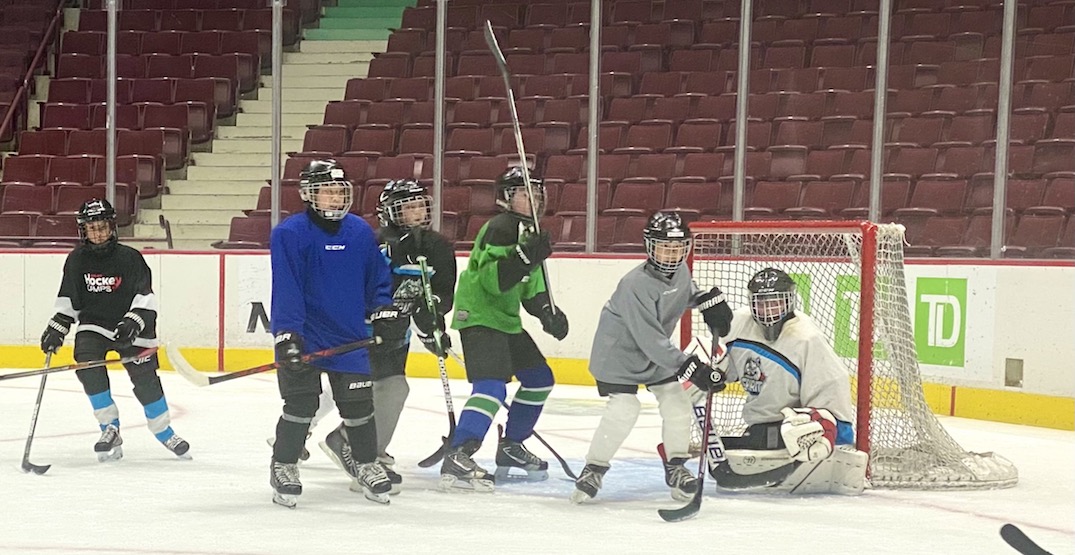 The home of the Vancouver Canucks is now the home for minor hockey players.

Usually home to NHL preseason hockey at this time of year, Rogers Arena won’t be hosting events for the foreseeable future due to the pandemic. That includes the Canucks, who are currently in their offseason after their playoff run in Edmonton. With next season’s start date yet to be announced by the NHL, it could be many months before we see Canucks players back on the ice.

So the Canucks put the call out to minor hockey associations in the Lower Mainland, offering Rogers Arena as a venue at a discounted rate.

“The Canucks have been really gracious and accommodating to even allow us access to this space,” says Jay Aikenhead, Director of Hockey Operations at Vancouver Minor Hockey Association. “They stepped up to really allow us to provide some kind of programming through September. Without that, each of our groups would have skated once over a 3-4-week period. With their help, each group has been able to skate once per week at least.”

Calling Rogers Arena home, even for a short period of time, is music to the ears of players.

“They’ve really appreciated it,” said Aikenhead. “Some of them are definitely a little starstruck… It’s pretty hard to pry them out of there.”

“It has been awesome to see kids on the ice here at Rogers Arena,” said Canucks COO Trent Carroll in a statement provided to Daily Hive. “We were one of the only arenas in the Vancouver area with ice available, so we were excited to help Vancouver Minor if we could.

“Supporting grassroots hockey development has always been one of our main priorities, and to see kids skating on the same stage as their favourite Canucks players was extra exciting for everyone. It was only a temporary solution, but it sounds like the kids will be back to their regular rinks soon which is great.”

A number of safety protocols are in place, with players needing to pre-register for contact tracing, and only one parent per child is allowed in the arena. Everyone needs to sanitize their hands upon entry and wear a mask, except when skating on the ice, and parents will sit in marked seats to ensure physical distancing.

As for what the minor hockey season will look like, that’s still up in the air, with teams working on their skills in practice until games are allowed to be scheduled.

Needless to say, the first week of the season has been one we will never, ever, forget. Thank you again to the @canucks for allowing us to skate at @rogersarena 💙💚 📸 Eric Jang

Our pre-season camp 🏒🥅 at @rogersarena is in full swing! 🤩 Thank you to everyone who has worked so hard to make this safe 😷 and possible 🙏 We can't wait for the start of the 2020-21 season! • • #vancouverhockey #vancouverangels #vancouvergirlshockey #vancouverfemalehockey #femalehockey

A post shared by Vancouver Female Hockey (@vancouverfemalehockey) on Aug 27, 2020 at 9:06am PDT

4 age groups, over 75 players, and 1 memorable NHL experience. What a way to wrap up the summer with our End of Summer Blast at Rogers Arena.

Vancouver municipal rinks are still closed due to the pandemic. But, Rogers Arena opened up to let the kids hold hockey practices. . Missing the Canucks. So, it was great to be “backstage” and watch the kids come out onto the ice.