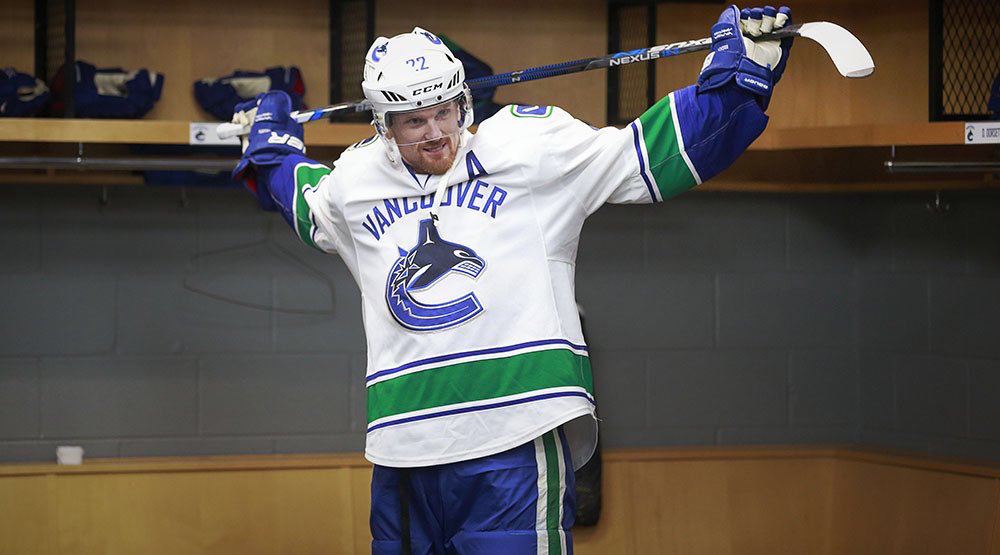 There’s a dark cloud ahead and the Canucks’ ship is heading straight for it.

I’m being a bit dramatic, but you can’t help but think that dark days are ahead for a struggling Vancouver team as they get ready to embark on a six-game Eastern road trip.

Desjardins said #Canucks need to play like @Patriots. "They stuck around and found a way. We can learn from that, we talked about it today."

That is, unless they’ve got a New England Patriots kind of miracle up their sleeve.

1. How the mighty have fallen

It wasn’t long ago that the Canucks were sitting pretty, in a playoff spot, after a win against the Colorado Avalanche. Just four games ago, in fact.

The win was their third in four games, and the sixth time they had picked up at least a point in seven games.

Since then, the Canucks have fallen, and fallen fast.

They’re now five points out of a playoff spot, with three teams to climb over.

How far can they fall and still have a chance at a playoff spot? There’s only 30 games left.

More alarming than their three-game losing streak has been how Vancouver has been losing. It took the Canucks nearly half a game to get a shot on goal against the Coyotes. Following the All-Star break, they started off slow against the Sharks and were buried.

In their last game against Minnesota, they were outplayed thoroughly again.

For the most part this season, when the Canucks have lost games, it hasn’t been because of a lack of effort. Saturday’s game was not one of those nights.

Bo Horvat’s post-game comments seemed to call that into question as well.

“You can’t take these guys lightly, especially when they’re the top team in the West,” Horvat said after the loss to the Wild.

“We didn’t come out hard enough. [Sutter’s late second period goal] should spring us [in the third period], that should get some extra life in our room and us as players need to be ready to come out and battle for that.”

Every team has an off-game, but the timing of this recent stretch of poor play is puzzling. The Canucks simply aren’t good enough to give anything less than their best effort against good teams and expect a positive result.

The Canucks are now faced with the prospect of needing a good road trip to stay in the hunt. For some teams that’s not a farfetched plan. For the Canucks, who own the NHL’s worst road record this season (6-15-3) – with half of those wins coming against the league’s two worst teams – it seems like an impossibility.

To make matters worse, the Canucks are going to be up against some stiff competition:

Four of those six teams are above the playoff bar right now, while St. Louis is a perennial playoff team, and Buffalo has a decent home record.

Vancouver is not out of it by any means, but a couple of losses combined with a couple of teams around them getting hot could dig a hole too big to get out of.

And if that happens, people will be staring at the bottom of the overall standings more than the playoff bar.

The power play is not a new issue for the Canucks.

As intensity ramps up for the stretch drive and goals become harder to come by, power play goals will take on even more importance.

Quietly, Vancouver’s conversion rate with the man advantage has been better of late, as they’ve scored on three of their last nine attempts.

Unfortunately, they’re not generating many opportunities. The Canucks have averaged just 1.75 power plays per game over their last eight games.

Ben Hutton will return to the lineup next game, which should be a boost to their second unit.

Two seasons ago, the Canucks faced a similar issue with their power play, and it caught fire down the stretch with Yannick Weber (of all people) helping to lead the charge. That helped them get a playoff spot.

Is there a knight in shining armour on the roster?

It will be interesting to see how much the Canucks use Ryan Miller on this road trip.

The 36-year-old has not been at his best in the two games since the All-Star break, particularly the game versus the Wild on Saturday.

He’s played 11 of the Canucks’ last 14 games. For the most part, he’s been excellent.

Given the seven-day break, I don’t think you can make the case that recent form has been the result of him wearing down.

But if he continues to play 79% of the games, fatigue will play a factor.

Take a look at the numbers of each Canucks goaltender and you’ll notice that Miller and Markstrom are neck-and-neck once again. Miller has a save percentage of .915, while Markstrom is at .913.

Will Willie Desjardins treat Miller like his unquestioned #1 goalie going forward? Or will he give Markstrom equal chance to prove he can carry the load?

The answer probably lies somewhere in the middle, but it shouldn’t take much for the younger Markstrom to get a shot.

The Canucks begin this stormy schedule on Tuesday against the Nashville Predators.