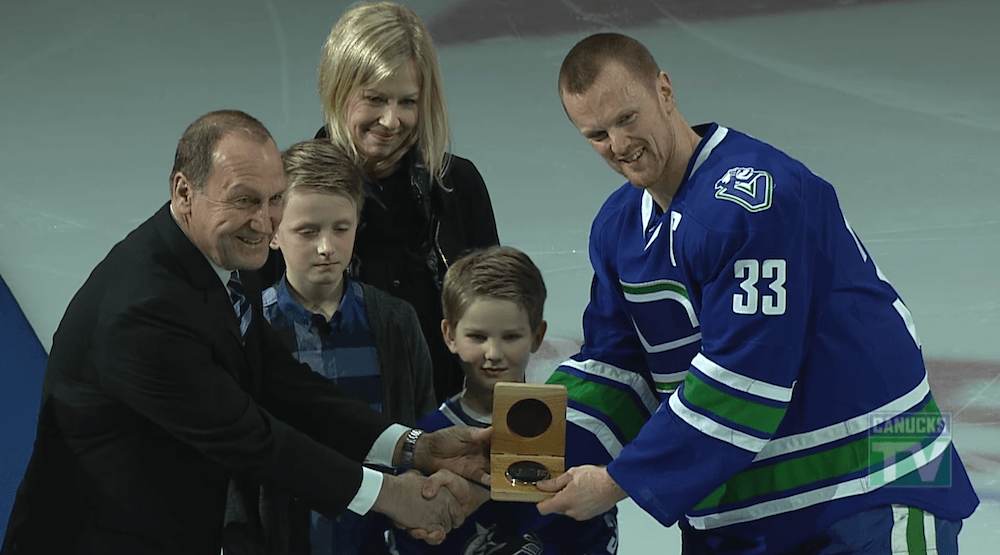 It started as a feel good movie.

Henrik Sedin received a silver puck and another standing ovation in recognition of his 1000th point (more on that later).

But soon, it became a comedy. But not the good kind. It was one of those comedies where you end up laughing about how bad the jokes are.

The Canucks were outworked and outclassed on Saturday night, losing 6-3 on home ice to the Minnesota Wild.

Let’s dive into the SixPack…

We knew this was coming.

The Canucks marched through January with a solid 6-3-3 record (can you call winning as many times as you lose ‘solid’?).

But they had an easy schedule.

January is probably the Canucks easiest month. Face Avs and Yotes twice. February and March schedule is brutal and when the real tank starts

Taj warned us about this.

February is where we find out of the Canucks are for real. They’re in the playoff mix in a down year for the Western Conference, but can they stay in the mix after games against the powerhouses of the NHL?

They were beaten handily against San Jose. Same thing against Minnesota.

Vancouver could play their best game against a team like Minny and still lose. But if they play at less than their best?

“It wasn’t a good goal on the first one,” a surly Ryan Miller admitted about the first goal post-game. He described the second goal as a “fluke play”.

“Spotting them some goals right there.”

He’s right. If you gift a team like the Wild some goals, you’re not coming back.

Next up is a six-game road trip. Vancouver is 6-15-3 on the road this season.

If they don’t have a good road trip, more fans will be playing with the NHL draft lottery simulator than looking at the playoff bar.

He’s already got a song written about him.

The Canucks All-Star is coming into his own on the ice, and he’s beginning to sound more and more like the future captain that people expect.

“It seemed like every breakdown we had, it was in the back of our net.”

Horvat wasn’t brushing this loss off as bad luck though. He was asked about what he thought after Sutter’s second goal got them to within two goals late in the second period. He wasn’t happy with their effort level in the third.

“We didn’t come out hard enough. That (Sutter’s goal) should spring us, that should get some extra life in our room and us as players need to be ready to come out and battle for that.

“Every guy’s gotta be better. Five percent. We talked about that earlier in the season, and earlier on when we were making a good push to get within some points of a playoff spot. I think we’ve gotten away from that a little bit.”

So while goals like this are getting people excited…

…his leadership should too.

Jannik Hansen returned to the lineup after missing the last 17.

He’s a player that will be the subject of a lot of trade rumours with the expansion draft looming, but man would it be hard to see him go.

If only the Canucks had one Hansen to put on every line, because every line seemingly needs him.

He took the puck to the centre of the ice, drawing three Wild players to him, opening it up for Brandon Sutter to score Vancouver’s first goal.

He helped Sutter, would probably take Horvat to the next level, and the Sedins desperately need him too.

Despite the final score, the first period was relatively evenly played. Even strength Corsi reflected that, favouring Minnesota marginally, 21-18.

The teams traded goals, and it looked like Vancouver would get out of the period with a tie until a comedy of errors gave the Wild a 2-1 lead with 25 seconds left.

That’s right. The other Granlund (wait, which one is the other one?) scored for Minny.

It started as a nothing play with Matt Dumba being chased down the wall by Sven Baertschi. Alex Edler decided to get involved for some reason, as did Nikita Tryamkin. A team meeting behind the net left the front open, although Edler managed to get into position pretty quickly.

Unfortunately all he did was get in Ryan Miller’s way, paving the way for Mikael Granlund to tuck the puck into an empty net.

The green Granlund scored again early in the second period, taking advantage of an ill-timed Baertschi pinch to put the Wild up 3-1.

Mikael was responsible for the fifth Wild goal too, out-waiting everyone to find Mikko Koivu open for a tap-in. It was a demonstration by the Canucks on how not to cover players on a 3-on-3.

Then on the sixth Wild goal, he got the hat trick goal. There were a lot of Wild fans in attendance, and I think the number of hats on the ice rivalled some Canucks hat tricks of the past.

Nikita Tryamkin had a terrible night.

He was on for four goals against – with four different D partners oddly enough – and had a team-worst -23 even strength Corsi. To understand how incredibly bad that is, consider that the next closest skater was -9.

Still, even on his worst night, Tryamkin gives us stuff like this…

At least he’s not willing to let Nino Niederreiter have his way in front of the net.

If they're going to lose badly, at least let us see Tryamkin crush Niederreiter like a bug…

Ok, let’s end this awful night for the Canucks the same way it started: on a positive note.

It’s been over two weeks since Henrik Sedin scored his 1000th point. Three games on the road and Canadian Armed Forces Night pushed celebrating Henrik to this game.

It began with a video where Henrik, oddly, thanked the fans:

“You welcomed me with open arms and made Vancouver not only the city I play in, but where I call home. Thank you #Canucks fans.” #HENR1K pic.twitter.com/OqCKS9fFry

With the way the Sedins were treated during their first few years in the league by a large faction of the fan-base, I think fans should be thanking Henrik for sticking with us.

In any case, it seemed appropriate that a class guy like Henrik would thank the fans on his big night.

Roberto Luongo, Daniel Alfredsson, Anson Carter, and Kevin Bieksa all congratulated Henrik throughout the night in some creative video messages. The best were from Luongo and Carter.

Here’s Luongo admitting he let the goal in on purpose:

Thanks to the best gif maker in all the land, Ryan Biech, for tonight’s gifs.